Governor, Alumnus Tarek Amer to AUC: 'We Are Here to Serve Others, Not Ourselves.' 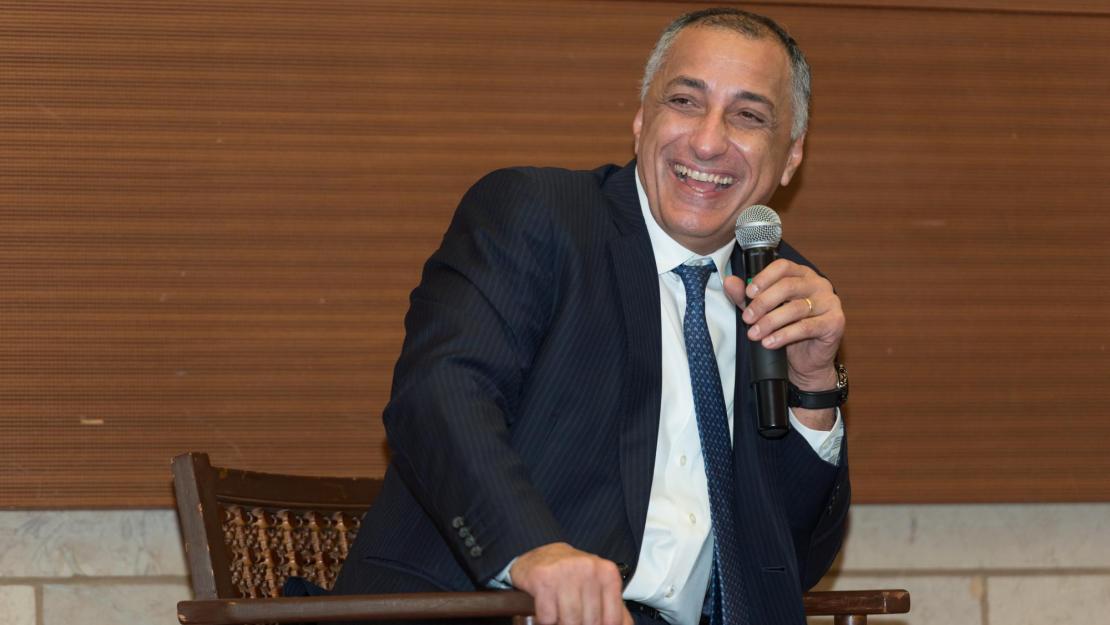 One year ago, the Egyptian pound was officially floated. Though it was a difficult decision, Tarek Amer '80, governor of the Central Bank of Egypt, explained that it was necessary to salvage the economic situation and fix structural imbalances for all the malpractices that had taken place over the years.

In a visit to his alma mater, the economics graduate spoke to a packed audience about decision making, goal-setting and the skills needed to confront hardships and lead the way. Curious audience members were able to ask Amer questions about the Egyptian economy and what to expect in the future. In many ways, his explanations about the Egyptian economy served as analogies for the struggles that freshmen and students face during their careers.

Reflecting on Egypt as a whole, Amer believes that the country still needs to work on innovation. He emphasized innovative solutions and the importance of technology -- specifically, financial technology. “We want the new generations to change things," he said. "We are waiting for you."

Flotation vs. Swimming Against the Current

Amer explained that the Egyptian pound flotation was a matter of confronting reality and not resisting the force of the market because it would worsen matters for Egypt as a whole. “It’s like when someone’s salary is LE 1,000, and yet, they spend LE 5,000. They will keep borrowing, taking loans and spending money they don’t have until they find themselves in debt," explained Amer. "This is what was happening [n Egypt].”

One of the malpractices Amer indicated was the state's sacrificing of dollars from its international reserves to stabilize the Egyptian currency. According to Amer, the market entails that this currency must depreciate every year by 10 percent. When this market function was resisted for 15 years, all international reserves were lost. “We had to face reality and confront it," he said. "In Egypt, we sometimes like to be in a state of denial. We see a problem; we get shocked, so we pretend it does not exist. This is dangerous. We have to be confrontational and courageous in dealing with problems. We have to be open with each other to move forward.”

Is there hope for Egypt? "Of course there is," asserted Amer, but emphasized the importance of not analyzing the situation based on what is being presented in the media because it does not accurately reflect how the economy affects the average citizen and is biased toward investors. More importantly, he explained that Egypt should not be compared to other countries. He believes Egypt has a long way to go to be able to avoid crises and danger zones. “We need to make an effort and have patience," Amer said. "We need to start producing and create better opportunities for the generations to come."

Amer encouraged students to study, understand and consult in their future endeavors. “Before this decision [of the Egyptian pound floatation], I consulted," he noted. "I traveled to France, Germany and Asia to meet with ministers. I went to the State Department in America, sat with international experts and got their take."

Times of hardship push one to become a leader, he added. “Leadership skills are what will get you to higher positions,” he affirmed. “When you become a person whom others can depend on, that responsibility ... will take you places. It’s not always about technical terms or book smarts. Leadership is about how you can motivate others and carry them forward.”

Acknowledging the anxiety students feel as they enter their freshman year or when they are about to graduate, Amer noted, “Struggling is the beauty of life. How are you going to be rewarded if you do not suffer? If it was easy, anybody would do it."

Before Amer served in one of the most powerful and strategic positions in Egypt and the regional economy, he described his years at AUC as "unconventional," having worked in Upper Egypt to help his father and siblings. As a young man, working and interacting with different sects of the community was his biggest motivation. “When I worked with farmers and laborers, that’s when I felt I had a goal and responsibility,” he shared. “I didn’t want to be governor of the Central Bank of Egypt as much as I wanted to help them and improve their conditions. ... To be successful, you have to live with the community, understand it and be part of it. ... Find the balance between what you love and how your choices will help you and others in the future,” Amer advised.

He advised students to take a stand and have a clear path and direction when it comes to one’s principles and ethics toward the larger community. “We’re here to serve people; we’re not here to serve ourselves," he asserted. "You have to prepare yourself and strengthen your character so you can serve the community. Be ready to accept small salaries at first and to put your status on the line if you have to. You cannot be afraid to voice your opinion. Community always comes first.”