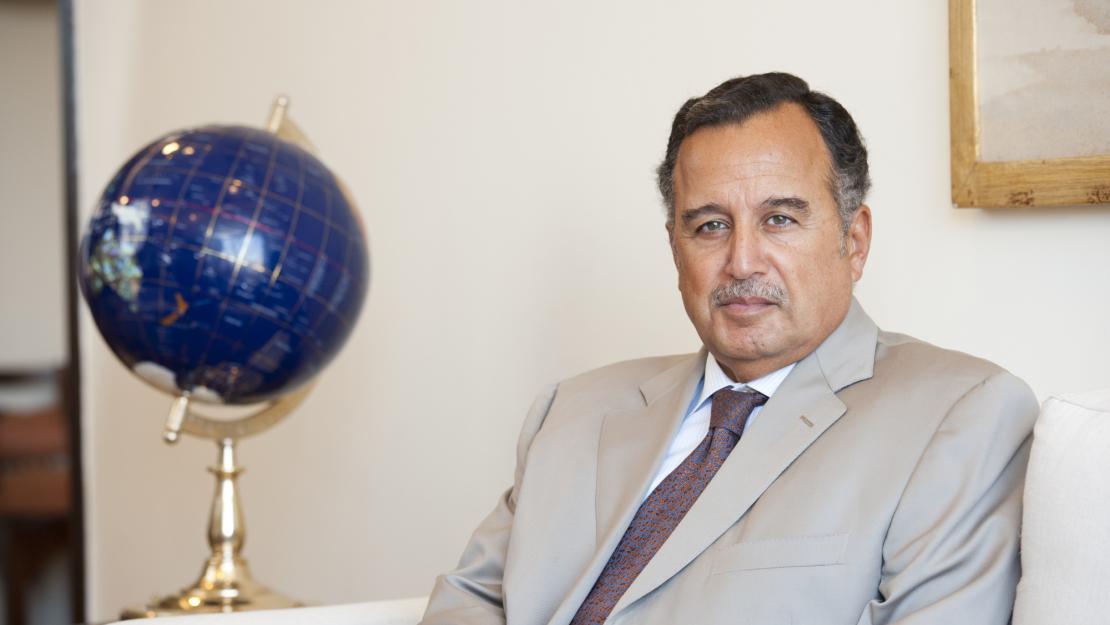 Nabil Fahmy ’74, ’77 has come full circle, starting as an AUC student and returning as founding dean and professor of practice in the School of Global Affairs and Public Policy (GAPP). Egypt’s former foreign minister and former ambassador to the United States and Japan, Fahmy was recently selected to be an external adviser to the president of the 72nd United Nations General Assembly, joining a group of globally eminenet personalities with vast expertise who will offer the president advice and critical opinion on today's strategic questions.

As an undergraduate at AUC, majoring in physics and mathematics, Fahmy initially felt pulled in different directions. “Liberal arts was my calling,” he reflected. “I was curious, and I wasn’t clearly determined in what I was going to do.”

After obtaining his master’s in management from AUC, Fahmy fell into a career in international relations upon being challenged by a colleague to sit for the foreign service exam. Having spent most of his foreign service career in Cairo -- hoping to give his family a sense of roots in Egypt -- he decided to leave Egypt, serving as the ambassador to Japan for two years and the United States for nine years.

Upon returning in 2008, he joined AUC, directing his vast experience in international affairs toward establishing and developing the school of GAPP. Though briefly called back into government as minister of foreign affairs in the summer of 2013, he made a public promise to return to AUC. Back at the University since Fall 2014, with even more expertise, he continues to voice his opinions and share the knowledge accumulated throughout such a rich diplomatic career. He often speaks on various global issues at conferences and writes frequently for different publications.

News@AUC spoke with Fahmy to learn more about his professional career, his entrance into academia and thoughts on current global affairs.

What hooked your interest in international affairs?

I’m interested in what’s happening around the world, it’s as simple as that.

I’m a diplomat’s son, so, I went to schools in the United States, Austria and Egypt. I was first interested in trying my hand at the private sector professionally, but intellectually I was always interested in international affairs. The only difference after the foreign service exam was that I decided to do this professionally rather than as a hobby.

What were the challenges you faced as a diplomat?

First of all, there is the difference in cultural orientation between East and West, North and South. They see things differently. At the beginning of my career, communications was becoming quicker. This immediate transparency and the lack of time to sit back and think before you give an answer really presented operational difficulties as countries didn’t understand one another.

The second challenge was that you need to be able to understand your role as a diplomat. Your role is about defending your own national interests. These national interests are defended in 100 different ways -- partially economically, partially militarily. Your role as a diplomat is to do this through communications. With the fast pace and facility of communications, there are many stakeholders engaged, including the media. As a diplomat, you’re really competing with everyone who has an opinion on a topic, and you have to do this at a quick pace.

What was your experience like as Egypt’s foreign minister?

I wasn’t particularly interested in politics. I told the government that I would join until the end of the roadmap at most. I committed to serve in this position because Egypt was going through a particularly delicate phase at the time.

I find it an exhilarating experience to see a region changing. That’s my lifetime subject of interest. Explaining this transition to the world wasn’t easy. It was a challenging time, but it was interesting.

What prompted you to enter academia?

I came back to Egypt in August 2008, feeling completely satisfied with my career. I had achieved what I wanted to achieve. Former AUC President David Arnold and Lisa Anderson, who was provost at the time, contacted me and suggested that I come and create a school of public affairs. They came to me with this interesting approach that it’s not about teaching a discipline, but it’s about providing an education. Adding my practical experience to the academic foundations that existed at the University was going to be useful for students. They wanted someone who was a practitioner rather than an academic.

We ultimately agreed that it would be called the School of Global Affairs and Public Policy. For me, public affairs -- in the new world -- is not only domestic. What happens domestically is in the context of global affairs. It’s difficult to separate them.

How has the School of Global Affairs and Public Policy evolved since its founding?

I came back in 2014 and continued to build on the achievements of the school. I am quite proud of what we’ve done. It’s multidisciplinary. It’s diverse. Several of our programs and faculty have been recognized, receiving international awards. Students have been awarded for their contributions in different disciplines. We’ve become recognized as a school very quickly – regionally and internationally. And, all of this is comes during a period when Egypt and the Middle East are going through a huge transition. I would argue that the geopolitical paradigm that exists – the world order paradigm, based on World War II -- is changing. To be able to help educate students and do research on global affairs in that environment is extremely interesting.

Read about AUC’s Master of Public Administration and Master of Public Policy offered by GAPP becoming the first worldwide to receive triple crown accreditation in the field of public affairs education.

Can you tell us about your role now as external adviser to the president of the 72nd United Nations General Assembly?

As a part of his board of advisers, I give advice on international affairs from my perspective. He’s brought in a group of people who have different points of view, trying to get a world view. His priority is sustainable development and peacemaking -- not conflict resolution per say, but how to create a better world environment. We’ll be dealing with everything from poverty to global issues like climate change and nuclear proliferation problems. Of course, the issue of refugees is very prominent now too.

I believe we need to have a more democratized international order.  It can’t be simply based on a balance of power as it was post-World War II. It should move to a balance of interests with shared responsibility.

How do you perceive Egypt’s current position in global affairs?

Egypt’s value added in the Middle East is intellectual. It’s cultural. That’s where we have an advantage and that’s where we can contribute the most. As we build ourselves economically, we need to -- at the same time -- project our soft power.

What should Egypt be focusing on?

I would argue that, with all the transitions that are occurring, our real target should be determining a goal. I would love to see -- and I encourage my Egyptian colleagues to think about this -- a vision for the future. What should the Middle East look like in the 21st or 22nd century? What are the systems that exist? What are the governing principles?

I’m a strong supporter of the nation-state system. I think we can talk about a lot of different constituencies, but we can’t have an order that is based on every small group determining what it wants. The nation-state system is imperative, but it should be a system that is respectful to ethnic and cultural specificity. Different ethnic groups should find resonance in their nationality, rather than feel that their nationality is this baggage. All of these issues are things Egypt can and should be addressing.

What advice would you give to AUC students?

One thing I’ve always been taught, particularly by my father, is to follow your own instincts rather than somebody else’s. Don’t try to replicate someone else’s career. I’m never someone to tell you that the foreign service is better than being engineer or an artist. I like to put a wholehearted effort into what I’m doing. I don’t believe in doing anything halfheartedly. The only advice I give is if you choose something, put your heart into it.