'This is a Massive Movement': Coworking Heads Get Together at AUC to Discuss Future of African Cities 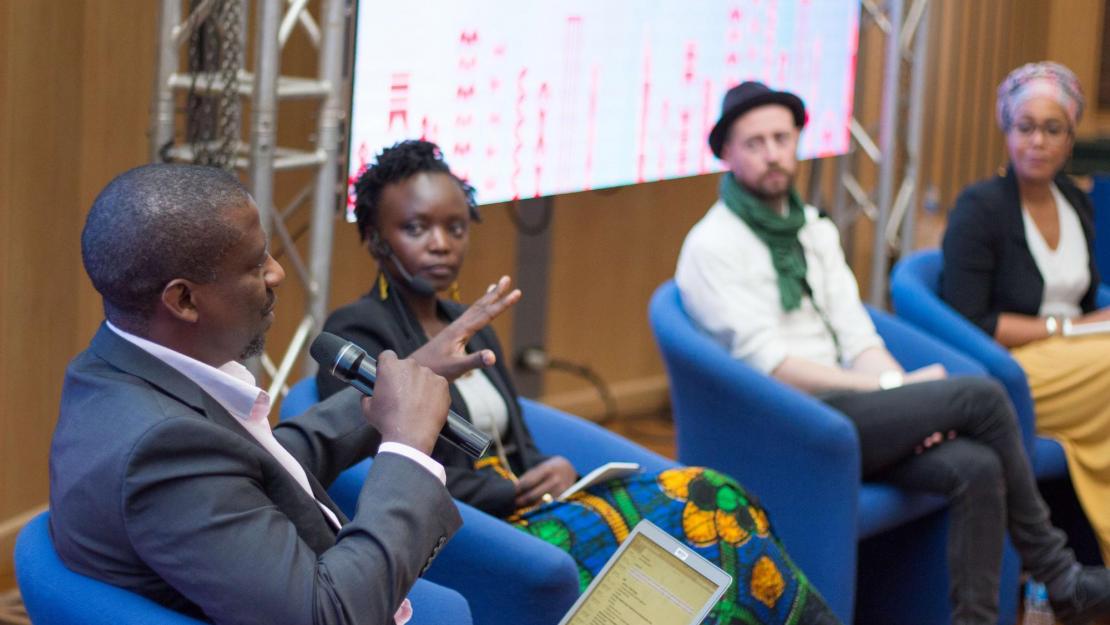 Panelists on the first day of the Coworking Summit. Photos courtesy of Yasmine Nazmy.
By
Elizabeth Lepro

Arthur Steiner encouraged attendees at the Future of African Cities Coworking Summit to join him in exploring the history of space.

Steiner, who is a project manager for coworking accelerator Hivos Mideast Creatives, wasn’t talking about flying comets or rocketships. He was talking about physical space and people across the continent who have been responsible for creating it. Many of those people gathered at the coworking summit, which was co-hosted by four collaborative-minded organizations, District Spaces, progrss, AfriLabs and Hivos. The conference took place over the course of three days and corresponded with an annual meeting of AfriLabs, the largest network of African technology hubs.

The central theme of the summit was simple: African cities matter in the coworking movement. This point came across clearly, based on the number and diversity of people -- representing nearly 40 startups and collaborative spaces -- gathered October 19 at AUC.

“This is one of the fastest growing global entrepreneurial movements worldwide,” Steiner said, adding that there are roughly 14,000 coworking spaces around the world right now and that the number is expected to almost double by 2017. “This is a massive movement that we’re talking about. Already in Africa there may be more than 300 spaces, maybe more than 500, and that’s really exciting.”

Steiner had his own part to play in the coworking boom in the region. He arrived in Egypt for the first time on January 28, 2011, which made his travel plans rather difficult, but ultimately provided what he said was a “revolutionary spark” for coworking in Egypt. Steiner met several people here, including the Helmy brothers. Eventually, he helped form one of the first coworking spaces in the country, The District.

“I think really that this is a key defining moment in the coworking movement in Egypt,” Steiner said. “From what I understand ... there are 400 working spaces in Egypt in different governorates, across the region, and that’s a result of this revolutionary spark of people who came together in Egypt.”

Steiner then asked audience members to share defining moments in coworking history from their own countries. Nekesa Were, director of platform services for the Nairobi-based iHub, said 2009 post-election violence in Kenya sparked the movement there. Around this time, Were said, human rights and reporting groups started the same discussions about shared space and collaboration that “techies” and innovators had already been having for some time.

“A lot of people were talking about it, a lot of people were probably looking for funding for it, but a lot of people really weren’t taking the plunge,” Were said. “I mean it doesn’t make sense: Where is my money? Where is my retirement money for investment? No one really got it. When [iHub] launched, there was anyone and everyone who’d said no. So, there was maybe 300 or 400 people in this space, from government to private innovators. For us, it was a validation in the African continent of actually having a space that belongs to no one, but belongs to everyone.”

Participants from Tunisia and Tanzania shared similar experiences -- government upheaval or shifts in public thinking led to revolutionary moments in the development of coworking spaces in their countries.

Ahmed Abdel Meguid, associate dean for undergraduate studies and assessment at AUC’s School of Business, praised the impact of the AUC Venture Lab and emphasized the innovative spirit of the University.

“The School of Business, as a cornerstone of AUC, promotes entrepreneurship,” Abdel Meguid said. “It is a main theme of the school’s mission to develop entrepreneurial and developmental global leaders."

Mohamed Helmy, CEO of progrss and KMT House, said this conference is important for creating a web of communication between cities throughout the region.

“In general, one of the major takeaways of the conference is the need to truly connect experiences and projects in different cities across Africa and to learn from experiments and technologies that are often born out of need, which means that these entrepreneurs and their projects need to find workarounds to basic infrastructural challenges,” Helmy said.

During the other two days of the summit, participants attended sessions at the French University in Egypt and toured parts of downtown as they related to the concept of “public space.”

“This is definitely the first of many [conferences] to come, and we are excited about the prospects of making the conference a regular feature of the landscape in Egypt,” Helmy said. “Cairo is and always has been an undeniable part of Africa, and there is so much room for collaboration and cross-country learning between Cairo and the rest of Africa, especially when it comes to urban-tech innovation.”