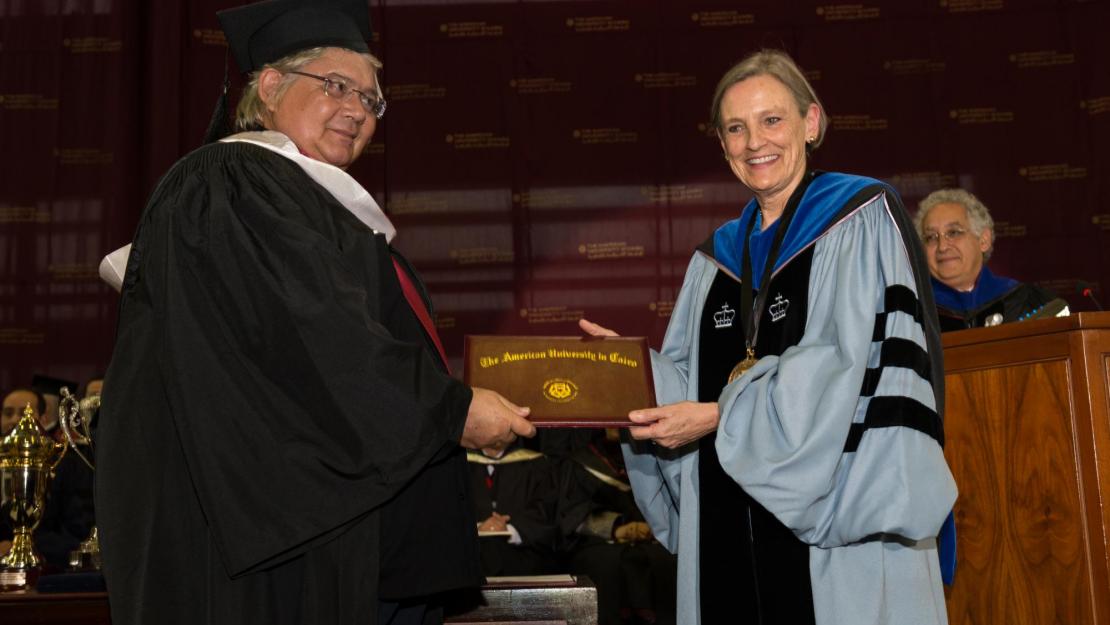 At an AUC memorial held yesterday in honor of the late Pandeli Glavanis, professor of practice, director of Academic Community Engagement (ACE) and associate director of Center for Learning and Teaching (CLT), President Francis J. Ricciardone highlighted the “life of love and service” led by Glavanis.

“He was a man who led a meaningful and impactful life – a life of love and service,” said Ricciardone. “He saw AUC as being the right organization, society, family and group of people who shared his value and purpose in life.”

Glavanis joined AUC with a distinguished set of international experiences that have undoubtedly strengthened the University’s pedagogic mission in providing quality education. His years of commitment to enhancing higher education have influenced his students and colleagues. As chair of the University Senate, he played a key role in actualizing distinguished initiatives at AUC, including the Timely Completion Policy and the cocurricular transcript.

“He took ideas, things that are easy to say, and made them into a reality,” said Robert Switzer, interim dean of the School of Humanities and Social Sciences, reflecting on useful programs that Glavanis developed to improve the student experience at AUC.

Also talking about his devotion to his students, Ellozy added, “He often shared with me the unsolicited thank you notes from the students he mentored, and they were invariably grateful for his support, encouragement and guidance.” She described Glavanis with two words: passionate and generous. “He was passionate about his teaching, education, serving AUC and what he believed in.”

Members of the AUC community and Glavanis' family viewed the memorial as a celebration of his life, taking the time to reflect on their experiences with him as friends, family-members, students and colleagues:

A graduate of Princeton and Hull universities, Galvanis promoted equality and devoted himself to the students and communities he served. His career brims with experiences at universities and institutes at a global level. He started his teaching career in 1974 as a research fellow and instructor at AUC for two years, later returning in 2004 as professor of development studies. He went on to become associate director of CLT.

Glavanis also served as a visiting fellow in the Department of Modern Middle Eastern History at Ain Shams University, as well as a senior international adviser in the Civil Service Modernization Project in the Republic of Yemen. Fluent in Greek, French and English, he spent considerable time working at universities across Europe and North America.

In addition, he served as a consultant for several institutions and nonprofit organizations, including the World Bank, Oxfam, UNESCO, the Norwegian Refugee Council and the Employment and Social Affairs Directorate of the European Commission.

Glavanis made significant contributions to the field of economics, development and sociology through his countless articles in prominent journals and other publications. He has received numerous awards for his contributions to AUC, including the Merit Awards of Excellence, President's Catalyst for Change Award in citizenship and service and an award for contributions to the University Senate.