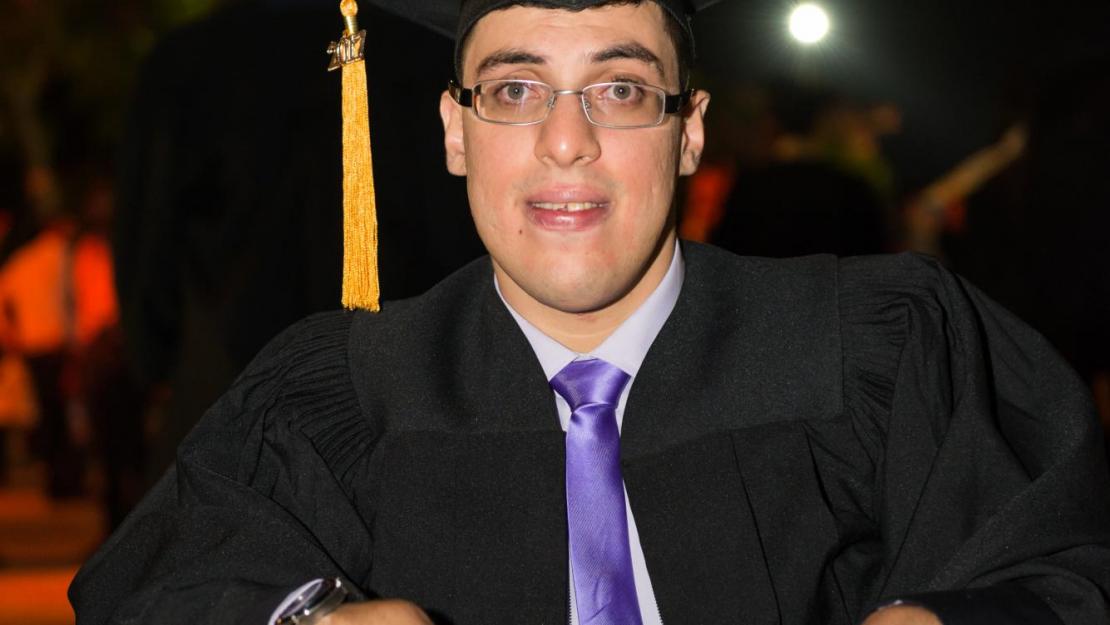 This past weekend, AUC saw off another outstanding graduating class. Among this year’s class of graduates are seven remarkable individuals who have had to overcome challenges due to various physical, psychological or learning disabilities.

These students, with their significant academic and extracurricular achievements at AUC, demonstrate that perseverance and determination ensure success. Four of these students share below their journey of success at AUC.

Hadeer El Ashhab is the first visually impaired student to graduate from AUC with a bachelor’s degree in computer science.  She demonstrated dedicated perseverance, despite her science studies having been limited as a thanawiya amma high school student, and was eventually awarded an HSBC Bank Egypt Endowed Public School Scholarship to attend AUC to pursue her passion in computer science. “All of the energy put toward reaching this point was worth it to open the door for any blind student in Egypt to study their favorite major, even if it is science-related,” she shared proudly.

While at AUC, El Ashhab made an impressive jump in her English level and was committed to making the most of her experience. She traveled on a U.S.-sponsored cultural exchange program and participated as a facilitator at the exchange program’s alumni conference in Turkey. “My best college memories are related to the extracurricular activities I joined, the people I met and the friends I made. It was truly a personal building experience,” she reflected.

Outside of the classroom, El Ashhab also found a love of research, winning first place for her work on sexual violence at AUC’s 2016 Research Day. Her summers were also kept busy, interning with Microsoft research lab in 2016.

Now wrapping up her undergraduate career, she is on the hunt for professional paths to take on next and hopes to continue pursuing a master’s degree in computer science.

Ahmed El Nadi joined AUC at the age of 16 and was known as a top-achiever. Beyond his academic studies in mechanical engineering, he dedicated his time to trying to build a start up, IGNITE, socializing on campus and playing speedball competitively. After suffering severe carbon monoxide poisoning several years into his time at AUC, El Nadi was hospitalized, resulting in serious memory loss. He was back at AUC just a month after the accident, diving into relearning many skills with the help of others around him. “It didn’t take long. It was more or less like I had the memories, but I just needed triggers to push me,” he said.

Unable to continue with his mechanical engineering studies and plans for his startup, El Nadi searched for a way to integrate his talents into his academic experience. He eventually found interest in the Department of Journalism and Mass Communication and support from Firas Al-Atraqchi, associate chair of the department and associate professor of practice. “I am really good at business and integrated marketing, “ El Nadi declared. “I advise students to explore their potential, especially in their first year. You never know what your specialty will be.”

El Nadi succeeded in completing his requirements, all while still participating actively in extracurricular activities like the Help Club and exploring classes he enjoyed. He has many plans on his mind now as he eases out of the University experience, among which are discussions with a director to film a movie based on his experience. He has also recently published a book on his experience titled “Reminiscence”.

Mohammed El Shafie, philosophy major and recipient of the HSBC Bank Egypt Endowed Public School Scholarship, remembers AUC as a helping guide through the various fields available to him. “AUC’s liberal arts education allowed me to see a great deal more than I would have seen otherwise,” he affirmed. “Professors in the philosophy department were always very willing to discuss theories with me. This is an experience which I don’t think I could have found at another institution.”

El Shafie observed that his visual impairment often pushed him to integrate himself more into the AUC community, as he often depended on others around him for navigation. “Professors were very understanding of my needs, and I often approached them more because of this. It enabled me to meet a lot more people, and it brought me to some extraordinary relationships and discussions,” he said.

In addition to discussing philosophical theories in class, El Shafie was very active in extracurricular activities, participating in AUC Times magazine, helping as a radio program manager, becoming a member of the Philosophy Club and engaging in other activities during his semester abroad at the University of Michigan. “These activities allowed me to see AUC as an educational institution that is part of a community. It taught me that the best kinds of educational institutions understand the needs of their community,” he shared.

El Shafie is now preparing to head to the United States to attend Harvard University and pursue his law degree. “I hope to work toward bringing the Islamic and Western worlds closer to one another. Through studying law, I hope to be able to combine law and philosophy, theoretically and practically, so I can achieve change,” he explained.

Sara Tarek Hussien, a journalism and mass communication major, looks back at her time at AUC as a significant growing experience. “AUC helped me a lot to become more confident and to depend on myself for many things. The knowledge I have received and the experiences I have gained from AUC have shaped who I am and made me a better person who can change the community,” she said. As a student with a visual impairment, she found AUC to be a fruitful learning experience and noted the helpfulness of her professors throughout her career.

Hussein was active in extracurricular activities, participating as a member of the marketing team of AUC Times, and similarly viewed her involvement as an invaluable learning experience that complimented her daily academic experiences. “Extracurricular activities were one of the best experiences at AUC. This helped me meet more people, make new friends and helped me learn to collaborate with people of different thoughts and majors,” she shared.

Hussein has plans to work in the media industry and eventually pursue her PhD in order to be able to return to AUC as a faculty member. She urges students to always persevere just as she did throughout her years at AUC. “Nothing can stop us from reaching our dreams, and everyone can make a difference in anything if we get the chance,” she declared.