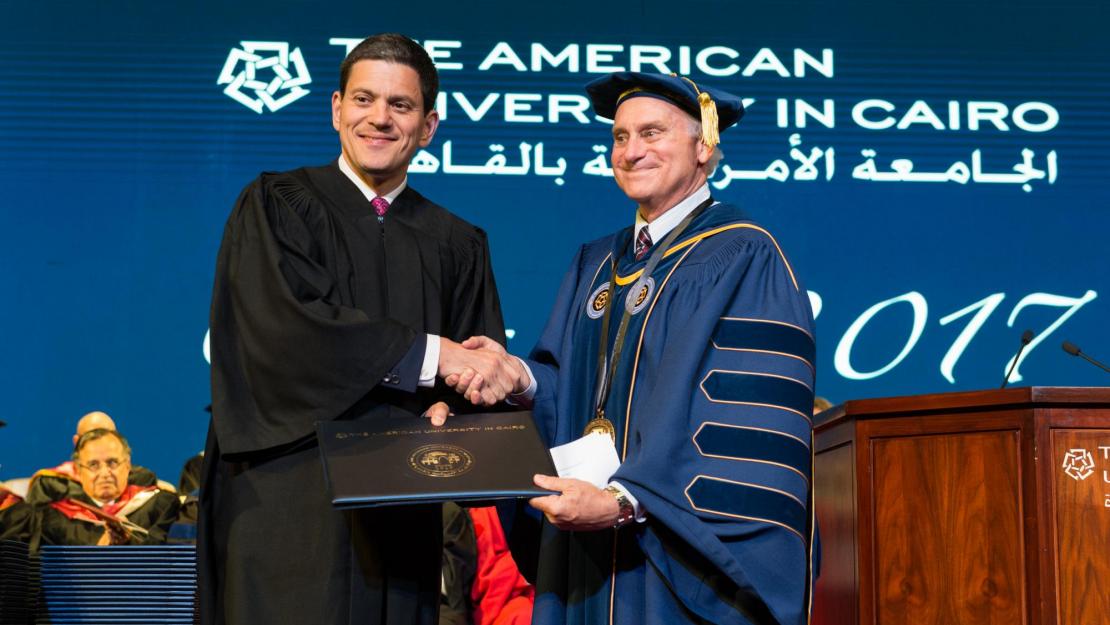 President Ricciardone presented David Miliband, president and CEO of the International Rescue Committee, with an honorary Doctor of Humane Letters (honoris causa) at the 2017 graduate commencement ceremony.
By
Katherine Pollock

David Miliband, president and CEO of the International Rescue Committee, received an honorary Doctor of Humane Letters at the 2017 graduate commencement ceremony. News@AUC spoke with Miliband to learn more about his work in alleviating global humanitarian crises and his advice for graduates.

What role do institutions of higher education like AUC have in responding to global humanitarian issues, such as the refugee crisis?

There are three really important functions for a University like AUC. One is to educate students about the changing shape of the world that we’re in and the place of humanitarian crises within that. Second, arming students with skills, whether policy analysis or vocational skills, will help them more directly address some of the aspects of humanitarian crises. The third great thing about a university is that it should teach students, not just through classes but through the whole experience, the value of pluralism and the importance of building bridges across divides. The majority of AUC’s student body is, of course, Egyptian, but within that, there’s room for lots of different points of view and for treasuring the idea of an American University that’s upholding the ideals of pluralism and diversity at a time when those values are more important than ever.

More specifically, what role could an American liberal arts University located in the heart of the Middle East have in ameliorating global crises?

One of the reasons I was keen to come to this commencement is that I believe institutions like this are more important at a time when there is a danger of suspicion between East and West, between Muslim worlds and the Western world, and of barriers of the mind and barriers of reality being erected. An institution like this, which embodies not only pride in American history, but also humility in the way that connections are made, is really important because it sets exactly the right tone for engagement between, in this case, America and the Arab World. We should celebrate the fact that the words America and Cairo are in the same name: not in a spirit of imperialism or domination, but in a spirit of respect.

The International Rescue Committee emphasizes education as a tool of empowerment for refugees and displaced peoples. Can you speak a bit more about this?

The greatest thing you can take away from anyone is their education, but once they’ve had it, you can’t take it away. We think it’s really important---at a time when half of all displaced people are children---that we remedy this terrible failure to give them this most basic human right. We know from science that displacement causes toxic stress; it affects the brains of the kids that are going through trauma. That makes it doubly important, both for remediation of damage and investment in the future, that we reverse this situation where less than 2 percent of the global humanitarian budget is spent on education. This is a function of an assumption that a humanitarian crisis is short term. Because there’s an assumption of the short term, you just put on a band-aid to help someone survive, whereas education is about helping someone thrive. It’s really a tragic situation when you see that so many refugees have nothing to do or, worse, that they have to send their kids to work or into an early marriage for economic or security reasons. Education is a protection of childhood.

How will the results of the recent UK elections affect the United Kingdom’s foreign policy and its role in global humanitarian crises?

I think anyone would say predictions are especially dangerous now, as we’ve shown ourselves to be wrong in so many of our predictors. One thing that one can hope for with some confidence is that the United Kingdom’s role in humanitarian policy remains unchanged. It remains strong, forward and positive because there’s been a cross-body consensus about the importance of international humanitarian aid, and I don’t see any reason why that should be challenged.

You have had a distinguished career in politics, international relations and humanitarianism. What advice might you have for recent graduates who are interested in pursuing work in these fields?

The best advice I can give is that people should follow their passions, stick to their principles and gain as wide an experience as possible. They shouldn’t be afraid of going outside their comfort zone. The need to build confidence by never being ashamed of making small steps is also very important.

It’s very important to not fall into the trap that you have to choose to be either committed to values or to making things work. Success in politics comes from bringing the two together. But it’s not just in politics; you should follow your moral compass whatever you’re doing. Another lesson is that everything is interdependent these days; foreign policy and domestic policy interact. One of the jobs for all of us is to combine an understanding of the far horizon with an acknowledgement of the puddles that are in front of all of us.