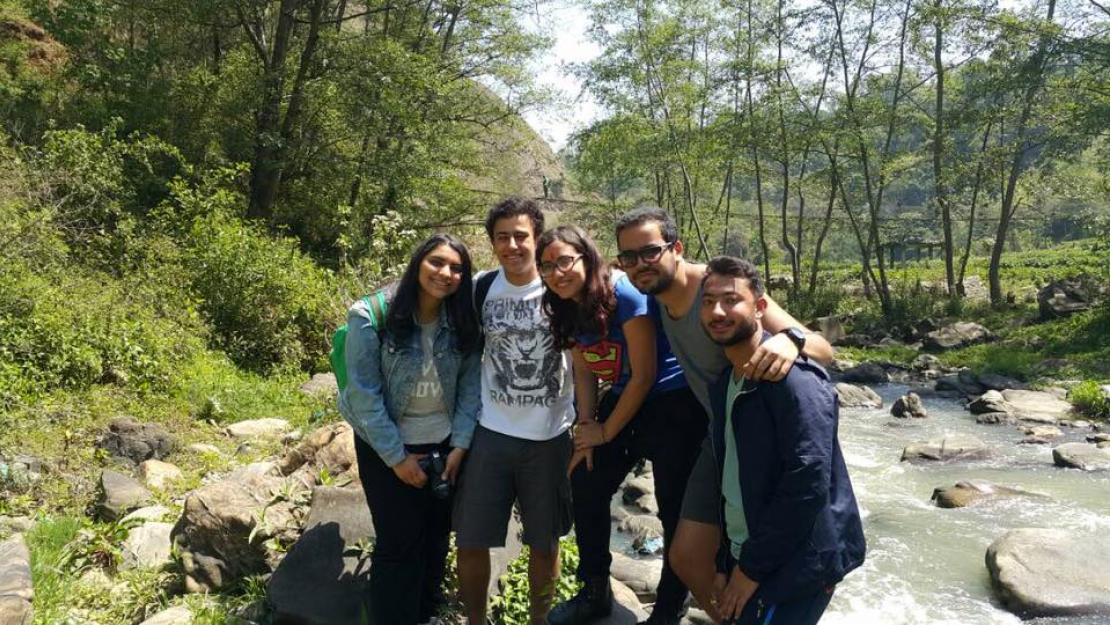 AUC student dorm residents recently returned from a trip to Nepal as a part of the Office of Residential Life’s third ResLife Cross-Cultural Program (RCCP). The program had students from Southwestern State College in Kathmandu, Nepal visit AUC and, in turn, a group of AUC students visited their peers in Nepal, immersing themselves in new country and learning firsthand about cultural exchange, international exposure and networking.

“When you visit a place, you usually use the word ‘traveling,’ but what you really mean is that you’re visiting as a tourist or touring,” said Chadi Ben Ghanam, an AUC student majoring in management of information and communication who traveled to Nepal. “When we traveled, we felt that we really engaged in a cultural experience, interacting with people, learning the language and exploring places tourists don’t typically explore.”

The program created an opportunity for students to develop a new mindset while traveling. “The notion of cross-culture has become an increasingly important aspect of discussion.” said Lamish Hamdy, Living Learning Communities officer at the Office of Residential Life. “Through the Living Learning Communities program, dorm residents are exposed to different cultures and environments, stimulating them both intellectually and socially.”

For the students, meeting new people was an opportunity to form cherished friendships. “The most amazing part of this program was meeting the students from Nepal here in Cairo first,” said Iyed Hamadi, a sophomore majoring in business administration and an international student from Tunisia. “We were able to befriend them and get to know them very well. It was a beautiful moment landing at the airport in Nepal because we all knew each other. As soon as we arrived, we greeted each other, all hugging,”

Echoing similar sentiments, Hanin Sonbol, construction engineering major, also emphasized the value of tolerance and open-mindedness. “Everyone had a different religious belief, but we all interacted well with one another. The best part of the trip for me was the cultural exchange and being able to develop new friendships.”

All dorm residents were invited to participate in the outings and tours planned for Southwestern State students in Cairo. The students and supervisors who were selected to participate in the program come from different countries, including Egypt, Tunisia and Palestine. This not only enhanced their cross-cultural perspective, but motivated them to socialize even more within their own university and dorm community. “We didn’t know each other at the beginning but now, we don’t end our days before going to the commons [area] to see each other even for five minutes,” Sonbol said.

The trip also offered students a chance to consider what they had learned in classes in real-world situations and to see things from a different standpoint. “As a political science student,” reflected Lilia Errahaiem, economics major, “I’ve studied what might constitute an underdeveloped country. Going to Nepal and seeing things was so different; it really changed my political perceptions. In many of my classes, I’m now trying to focus my research on Nepal.”

“The trip offered students a diplomatic experience,” noted Hamdy, adding that students were able to approach this experience through a variety of lenses: academic, cultural and professional.

Sharing AUC with Others

Political Science Professor at Tribhuvan University in Nepal, Dhan Prasad Pandit, was central in pushing to establish a partnership between AUC and university students in Nepal. “The idea of visiting one of the most reputable universities in Egypt one day was very exciting,” said Professor Pandit.

AUC students were also thrilled at the chance to share their campus and their lives with students from another university and country. “The Nepalese students were so impressed by AUC and loved the campus,” recalled Hamdy.

The first RCCP was held during the 2014-2015 academic year, during which AUC hosted 12 students from Kelantan University in Malaysia and later had the opportunity to send 12 students to Malaysia over the summer. In the 2015-2016 academic year, the Office of Residential Life launched its second RCCP with the University of Ibn Tofail in Morocco. “The program has been a great success, resulting in an unforgettable experience for Malaysian, Moroccan, Nepalese and Egyptian students,” reflected Hamdy.

AUC recently signed an agreement with the Office of Residential Life at Pretoria University in South Africa for the 2017-2018 academic year so that the program can continue to positively impact students’ university experiences. “RCCP also allows dorm residents to enjoy an intellectually fruitful abroad experience at a lower cost, making it accessible to the wider dorm community,” said Hamdy, noting that this program allows students who might not have been able to travel to benefit from travel outside of their own country. “Our aim is to enhance the development of students living on their own and away from their homes and families.”