Inauguration, Campus Connectivity Highlights of Board of Trustees Cairo Visit 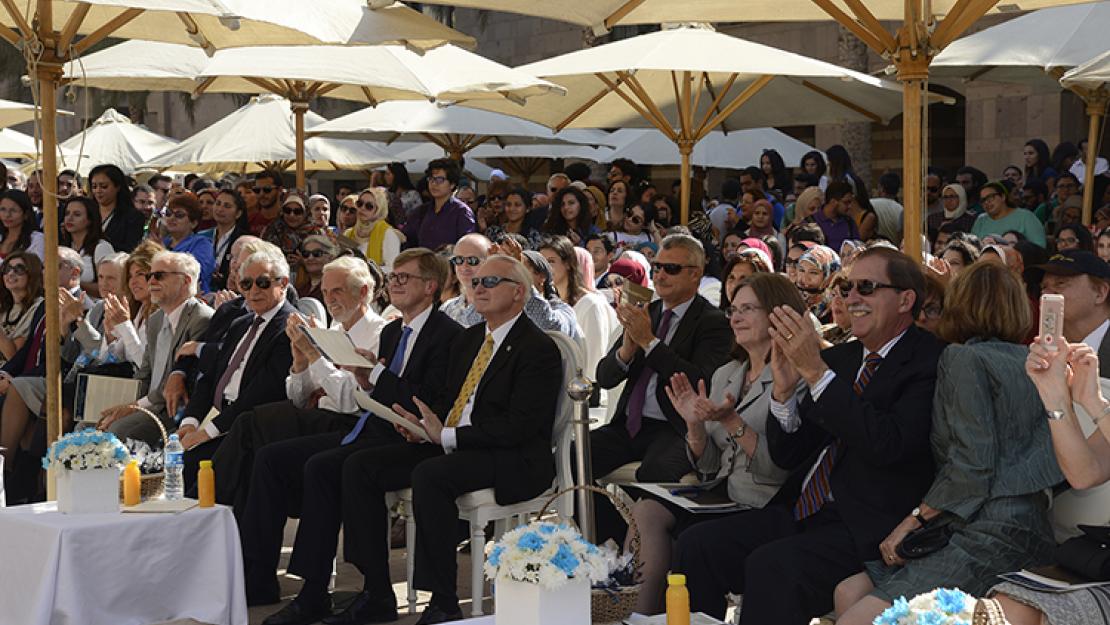 At their annual weeklong Cairo visit earlier this month, members of AUC’s Board of Trustees attended President Francis J. Ricciardone’s inauguration. Faculty, staff, students and members of the local and international community attended the ceremony, in addition to guests, including past AUC presidents, presidents of other universities in Egypt and the region, diplomats and University supporters. Following the ceremony, the board attended a Campus Celebration featuring student folklore performances.

While the several Egyptian members of the board visit the campus and interact with faculty and students, staff and parents year-round, the annual board meeting in Cairo offers the trustees who reside outside Egypt the chance to connect and engage directly with the various constituencies on campus. The trustees met with members of the University Senate and school deans, discussed the students' perspectives with them over lunch, and dined with faculty members in their homes. The trustees also heard faculty presentations about new initiatives, such as the arts department’s expansion of its programs open to the wider Cairo community, the AUC "Neighborhood Initiative" to connect the campus to New Cairo and the vision for a new multidisciplinary institute focused on human ecology and public health.

Besides the annual meeting at the Cairo campus, the Board of Trustees also convenes two more times each year in New York. “We are fortunate to have committed trustees who devote a week of their busy schedules -- from early morning to late at night -- to visit campus and interact firsthand with our special community on the ground,” said President Francis J. Ricciardone. “Their year-round generosity, dedication and support to AUC ensure that the University will continue to advance and overcome all challenges. Their presence with us in Cairo and ability to engage directly with many members of the community contributed to the success of the week.”

The board participated in discussions and presentations on a wide range of topics, including plans for a major fundraising campaign; the restructuring of the academic area; the future of the Zamalek dorms; renovation of the New York Office; as well as updates on various University functions including academic affairs, institutional advancement, finance and facilities. The board facilities committee received progress reports on a wide array of campus services, ranging from student housing to transportation services, with emphasis placed on how changes were being made to improve the quality of services. “The board acknowledged the considerable effort made by the entire facilities and operations group in maintaining the New Cairo campus, as it has shown brightly during the presidential inauguration and subsequent board meetings,” said Brian MacDougall, executive vice president for administration and finance.

The board also elected its new Chair Atef Eltoukhy ’74, money manager and chairman of Aurum Capital Management, succeeding Richard Bartlett, who completed his second, three-year term as chairman this October.  To read more about the new chairman, click here.

On the financial side, the board audit committee received the FY16 audited financial statements and discussed the FY16 financial results. “[The finance committee] gave considerable attention to the large challenges facing AUC in terms of the Egyptian pound devaluation, shortages of foreign currency and an unsustainable spending level from the endowment,” said MacDougall.

Distinguished for their professional accomplishments in the areas of business, law, education, philanthropy and scholarship, members of AUC’s Board of Trustees are all volunteers who dedicate their time and resources to supporting the University. Primarily Egyptians and Americans, the trustees do not receive any compensation. They provide generous financial support to the University, in addition to their fiduciary responsibilities. To see a complete list of AUC’s trustees, click here.