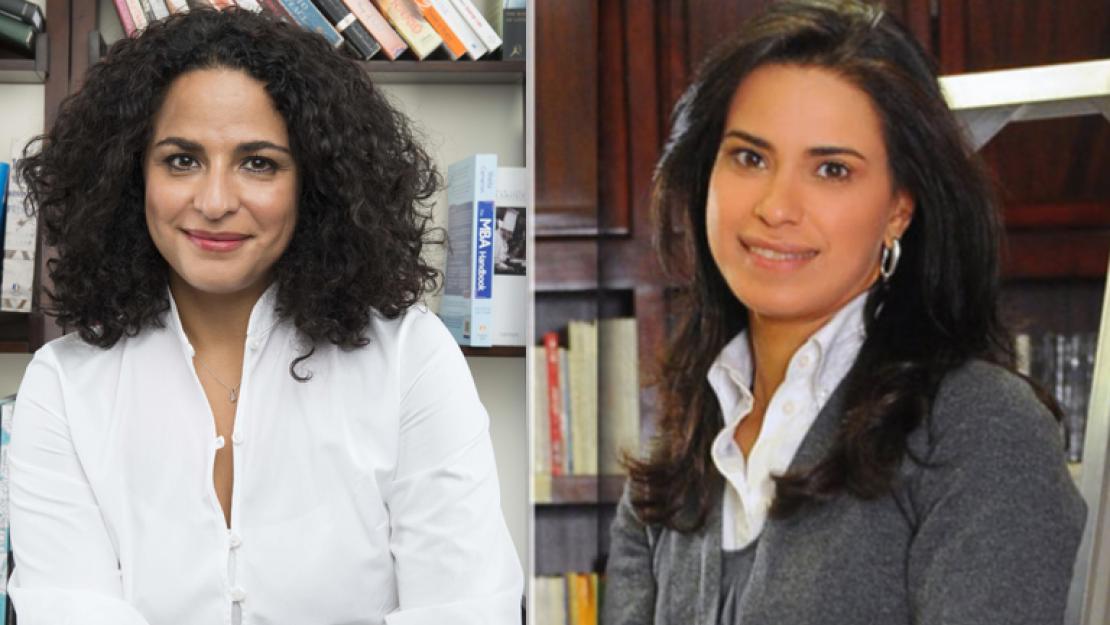 AUC alumnae and co-founders of Diwan Bookstore, Hind Wassef '92, '95 and Nadia Wassef '94, '96, will give the commencement address at this year’s midyear graduation ceremony.  AUC invited the sisters to speak, recognizing their talent in merging their literary education, entrepreneurial spirit and social consciousness in the founding of Diwan Bookstore.

Nadia and Hind both earned their bachelor's and master's degrees in English and comparative literature from AUC.  Nadia also went on to get a second master's in social anthropology from the School of Oriental and African Studies at the University of London.

“I am overwhelmed by how much this institution has taught me over the years," said Nadia. "First and foremost, I am grateful for the love of reading that AUC instilled in me. This love led to a lifelong relationship with books."

After graduation, both Nadia and Hind went on to work at NGOs, individually addressing women’s issues and education in Egypt. However, they couldn’t ignore a move away from literature in Egyptian culture and the need to expand the cultural horizons of people to make a better world for this generation and the next.

“What good is an education if it does not go even a few centimeters toward a higher caliber of human beings?” Hind questioned.  The sisters had always considered starting a bookstore so, on March 8, 2002, International Women's Day, their flagship store opened in Zamalek.

Diwan’s bookstores are unique to the Cairo literary scene, being the first in Egypt to sell books for children and adults in English, Arabic, French and German as well as movies, music and creative supplies. The bookstore also has in-store cafes that encourage visitors to linger in the friendly, library-like atmosphere.  The chain has expanded to include Diwan Kids, providing children's books, toys and games that spark creativity and imagination.

Diwan Bookstore now has seven branches throughout Egypt, in addition to online shopping and an e-book service. Diwan-E is an e-reader application for downloading books to read on smartphones and tablets. The application is free of charge and currently boasts more than 1,000 Arabic titles, 155 of which users can download for free. The app also features more than 100 English titles from AUC Press.

Diwan Bookstore has been recognized in international publications including TIME magazine.  In 2011, the Wassef sisters received the Veuve Clicquot Initiative for Economic Development Award and in 2013, they were presented with the Best Woman Entrepreneur Award by the American Chamber of Commerce’s Middle East and North Africa Council. Most recently, in 2015, both Nadia and Hind were named to the Forbes Middle East’s 100 Most Powerful Arab Business Women.

While the Wassef sisters have been been hugely successful at selling books by any account, Diwan is more than just a bookstore.  The stores have soul and the space they create has been described as an oasis and cultural beacon in the heart of Egypt. The bookstores host events for local authors, provide workshops and lectures, showcase the works of emerging artists and filmmakers, and promote independent musicians.  The Wassef sisters don’t want to simply distribute culture; they wish to create it.

In fact, the sisters collaborated on a bilingual book of the first photographic documentation of Egyptian women’s movements in the first half of the 20th century. Daughters of the Nile: Photographs of Egyptian Women's Movements, 1900-1960 was published by AUC Press in 2001.

Both Nadia and Hind have been involved in research on violence against women and female empowerment. Before founding Diwan, Nadia worked with the Egyptian Female Genital Mutilation Task Force for the National NGO Commission on Population and Development. In the 1990’s, Hind was an active member of the New Woman Research Centre carrying out research and awareness-raising projects on violence against women. In the late 1990s, Nadia also passionately engaged with women’s rights groups in Egypt as a part of the Female Genital Mutilation Task Force, the Women and Memory Forum, and the New Woman Research Centre.