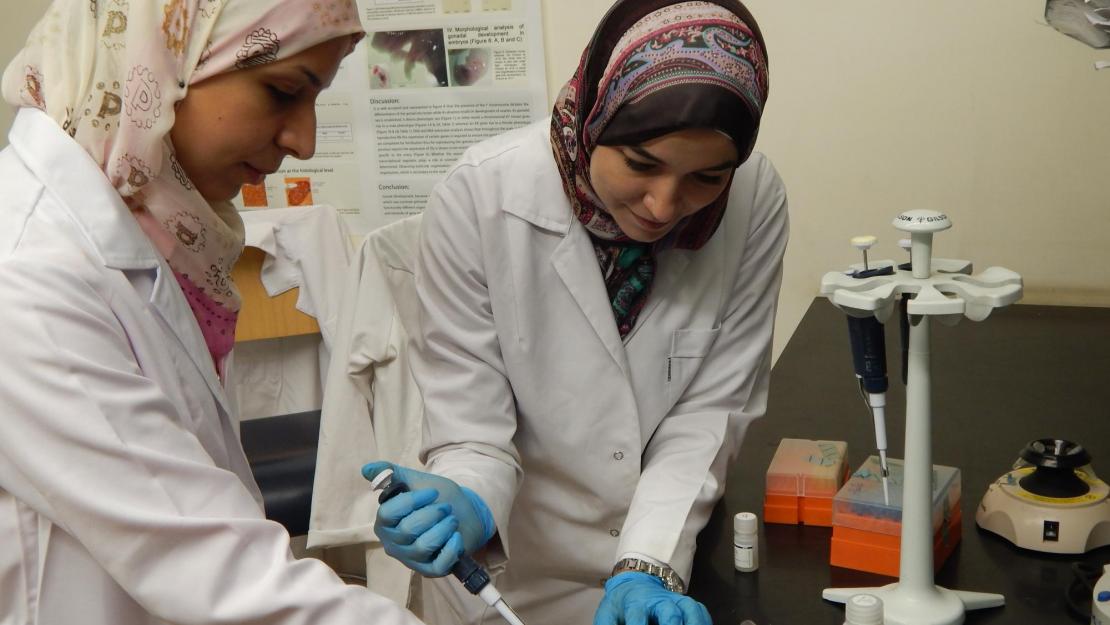 After millennia of failed attempts, contemporary nanotechnology is the closest humanity has come toward the pursuit of alchemy.

Although nanotechnology is not exactly alchemy, the science does possess many similar fantastical qualities. Shrinking something into its nanosize counterpart elicits reactions within the original material that border on the seemingly magical.

“When you play with the size of a particular compound, it appears as if it is completely new,” said Wael Mamdouh, assistant professor of chemistry and director of the nanotechnology graduate program.

More specifically, if a bulk-sized piece of gold, for example, is shrunk down to its nanosize counterpart, it will exhibit entirely different characteristics, even though the chemical makeup of the material remains unchanged. The nanogold may exhibit an unusual rainbow of colors — blue, green or red — or it may convert into a catalyst, whereas bulk gold is chemically inert. The chemical makeup of the compound is unchanged throughout this process; the only difference is that the material has been shrunk down to the nanoscale.

“We focus on developing novel nanomaterials –– including nanoparticles, nanofibers and nanocomposites –– by using natural and synthetic materials, and investigate the applicability of these fabricated materials in the biomedical and environmental sectors,” said Mamdouh, who founded the Biomedical Polymer Nanocomposites Hydrogels and Tissue Engineering research group at AUC’s Yousef Jameel Science and Technology Research Center.

According to the World Cancer Research Fund International, breast cancer was the second highest diagnosed form of cancer in 2012 and the most common cancer in women worldwide, representing more than 25 percent of the total number of new cases diagnosed in 2012. It is also the most commonly diagnosed cancer among women in Egypt, according to the Breast Cancer Foundation of Egypt. Typical cancer therapies include painful side effects because medications not only target diseased cells, but harm healthy cells as well. Accordingly, patients suffer a wide variety of debilitating side effects during treatment.

“Although there are a number of anticancer drugs in the global market, yet patients are still suffering from cancer,” said Mamdouh.

Factors that come into play here are the type of anticancer drug, method of administration, required dose to completely kill cancer cells, the drug reaching cancer cells only without affecting normal cells and the delivery method. “By the time the drug enters the patient’s blood stream,” Mamdouh explained, “most of the dose is lost inside the body as it tries to reach the cancer cells, and more importantly, the drug may attack normal cells as well, which is a huge side effect.”

The new delivery method that was developed by Mamdouh and Siam’s research team is based on designing novel nanoparticles that carry the anticancer drug in a more controlled fashion. When tested against breast cancer cell lines, the nanoparticles gave the same efficacy of the anticancer drug while reducing the required dose by 96 percent. The smaller dose given during treatment offers a strong potential to alleviate or eliminate side effects normally associated with cancer therapy.

“Nanotechnology is at the forefront of cancer therapy,” noted Siam. “Nanomedicine can optimize the efficacy of existing anti-cancer compounds. Through this, the amount of drug given to the patient is significantly reduced, as it’s delivered in minute amounts ­­­­­­­­­­­­ —nanoscale — yet it’s targeted to the cancer-diseased cells, and the possible side effects on healthy tissue can be dramatically diminished.”

“We did not change the drug; we simply modified the way the drug reaches the cell,” Mamdouh added.

The AUC team turned their research into a prototype with one patent application, initially filed with the U.S. Patent and Trademark Office in 2014 and now converted into an international Patent Corporation Treaty application. The next research phase involves specifically targeting cancer cells so the medication will only affect diseased cells.

“Millions of people die every year from cancer, and the burden of this disease on the individual and their families is substantial,” said Siam. “In Egypt, the incidences of urinary bladder cancer, liver cancer, breast cancer, lymphoma and Leukemia are quite high. Infectious diseases contribute greatly to the incidences of some of these cancers, including HCV infection and bilharziasis. The idea is to eventually reduce the national cancer burden through targeting regional cancer molecular subtypes.”

Mamdouh added, “Our main focus is to engage ourselves with solving problems in Egypt and globally.”

One of the more recent and intriguing fields the AUC research team has undertaken since 2012 involves the investigation of natural, instead of synthetic, materials for medical applications, particularly digestive disorders, which affect millions of people worldwide with potential impact on health and quality of life. Usually, these disorders are treated with invasive procedures or chemotherapeutic agents. Recently, it became popular to treat digestive disorders by herbal therapy, especially when traditional therapy fails to treat the disorders.

Take honey and inulin, for example. Honey has been used for centuries to treat wounds due to its antibacterial properties. Inulin, on the other hand, is a natural storage carbohydrate used in a diverse range of food and pharmaceutical applications. It is used by the food industry as a soluble dietary fiber and fat or sugar replacement, and in the pharmaceutical industry as a stabilizer and excipient, or medium for the drug.

When Mamdouh, Siam and Walaa Wahbi, a graduate of AUC’s master’s program in chemistry, shrunk honey and inulin into their nanosize, the nano-honey and inulin were so dense in antibacterial properties that they were close to an antibiotic. This is a potentially significant discovery because people in Egypt are dying every day from preventable diseases and infections.

“Bacterial infections, in particular, are some of the most deadly,” said Mamdouh, adding that this new discovery has the potential to change a wide range of medical treatments and devices, from the treatment of simple wounds to more invasive surgeries. In addition to antibacterial properties, the nano-honey and inulin were found to have enhanced prebiotic properties as well. “This will help in relieving many digestive disorders,” explained Mamdouh. “They are natural, inexpensive and very safe.”

Highlighting the importance of this research, Siam noted, “Infectious diseases are another major global burden. The discovery of Penicillin in the 1920s was a breakthrough in medicine and in the battle against infectious diseases. This was later challenged by the exponential increase in antibiotic resistance. Scientists are, therefore, continually discovering and improving antibiotics to treat infections, and bacteria are continuously developing antibiotic resistance against drugs. We, as scientists, will always need to discover antibiotics or any antibacterial agents to treat infections in order to defeat the emerging antibiotic-resistant bacteria.”

Mamdouh believes nature offers a plethora of potential solutions to a wide variety of medical problems. He and his students are currently experimenting with plants and herbal extracts. One of Mamdouh’s Ugandan students, James Kegere, a recipient of the African Graduate Fellowship at AUC, brought back from his home country a plant that is only grown in Uganda and is often utilized for healing properties. The plant is currently being investigated at AUC for more broad applications. In addition, five undergraduate biology and chemistry students are currently investigating ordinary compounds, such as black seeds, curcumin and onions, to determine how these naturally occurring compounds may be more effectively harnessed for medical applications.

The AUC team continues to research the possible antibacterial properties of naturally occurring compounds converted into nanomaterial. This line of research yielded three more patent applications filed in the United States since 2014. “With nanotechnology, the possibilities are endless, particularly in the medical field,” said Mamdouh.