After the Discovery of a 43-Million-Year-Old Whale in Egypt’s Desert, AUC Professor Hesham Sallam Reveals More Is Hidden in Egyptian Deserts 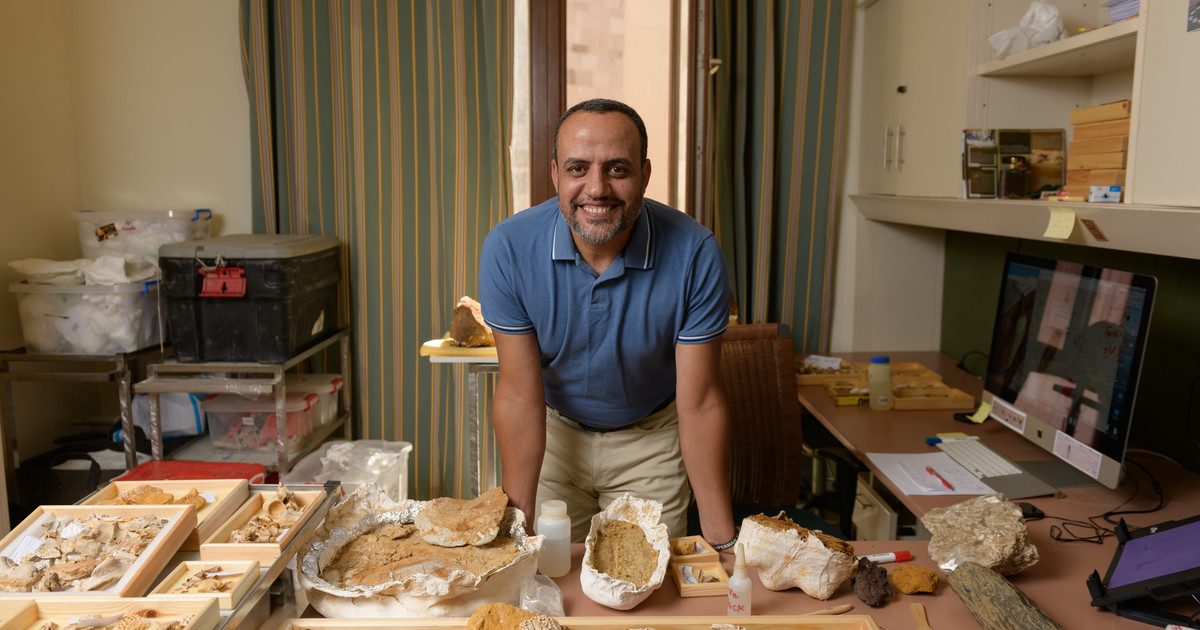 After the discovery of a remarkable 43-million-year-old new amphibious whale, Phiomicetus anubis, from middle Eocene rocks in Egypt’s Fayoum Desert, Hesham Sallam, professor of vertebrate paleontology at The American University in Cairo (AUC) reveals more is hidden in Egyptian deserts. Sallam, the founder of Mansoura University Vertebrate Paleontology Center, and a team of international researchers recently published a study in the Proceedings of the Royal Society B Biological Sciences journal on the latest discovery. Sallam, who is the senior author of the study, says there is more to Egyptian deserts: “Currently, with a team from the Egyptian Environmental Affairs Agency (EEAA), Sallam Lab is studying the fossilized remains of a newly discovered extinct carnivorous mammal that lived in Egypt 30 million years ago, also discovered in Fayoum. We are also currently studying the fossilized remains of a new carnivorous dinosaur discovered in Bahariya Oasis, in the Western Desert of Egypt.”

At AUC New Cairo campus, Sallam also stumbled upon a fossilized whale tooth of an ancient whale from an extinct group called protocetids that lived in Egypt 40-45 million years ago. The fossil was found embedded in one of the AUC floor tiles.

He also recently identified the fossils of another giant whale in marbleized stones found in Cairo, unearthed from a limestone quarry located at Wadi Tarfa close to Minya Governorate, Upper Egypt. The fossils are currently under study.

Such discoveries help in tracing the story of the transitions of ancient animals. “Phiomicetus Anubis has not only added to our knowledge about the early whale transitional forms but has also raised new questions about the ancient ecosystems in which it lived and has directed our new research vision toward finding answers to big questions such as the origin and coexistence of ancient whales in Egypt,” Sallam said.

Sallam describes the desert as not only home for ancient fossils but a “home for him.” He has been conducting paleontological research on the vertebrate fossils of Afro-Arabia for the past ten years.

In January 2018, Sallam and his team discovered the large sauropod dinosaur Mansourasaurus, which was found in the Dakhla Oasis area of Egypt. Earlier this year, a team led by Sallam also discovered ancient fish fossils that survived global warming 56 million years ago, giving a critical glimpse into the planet’s future.

Sallam hopes to build a new facility for paleontology at AUC and an exhibit area for the ancient prehistoric life of Egypt at AUC. “The new paleontological facility would also allow AUC students, international students, and professors to study the new Egyptian fossil collection.”

Sallam received his bachelor's degree in 1997 from the Department of Geology at Mansoura University in Egypt; then he completed his PhD in 2010 at the University of Oxford (UK). In addition, he was a visiting scholar at Stony Brook University, Ohio University, Denver Museum of Nature and Science, and Duke University, USA, from 2014 to 2017. He founded Mansoura University Vertebrate Paleontology (MUVP), the only high-level vertebrate paleontology research unit in the Middle East, combining research, outreach, and conservation endeavor.