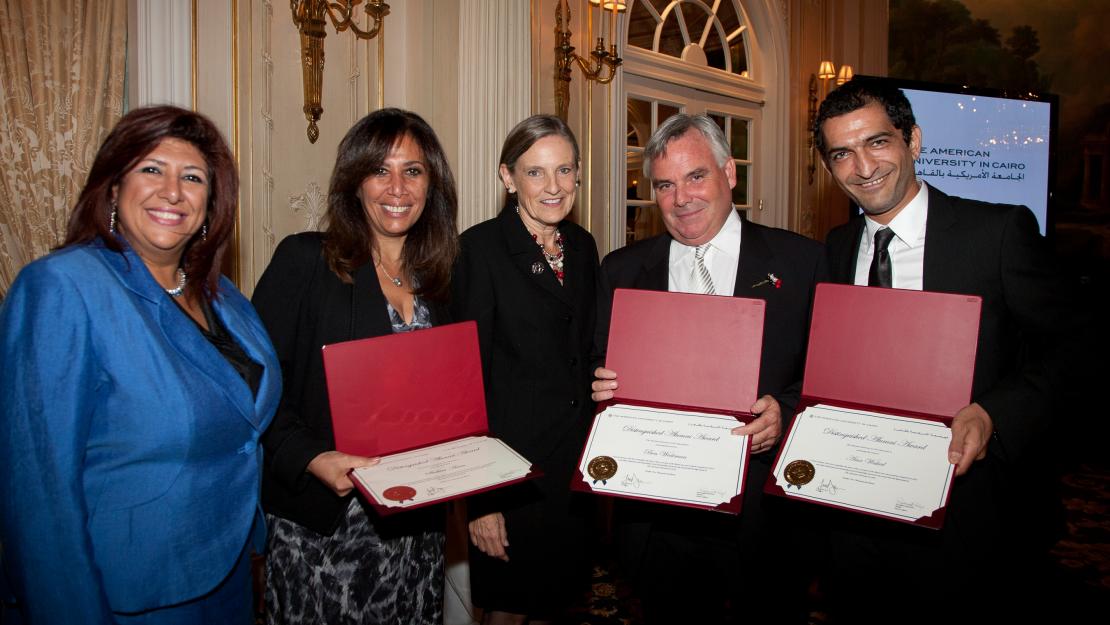 Critical thinking.  Self determination.  Confidence.  Communication and collaboration.   These are the common threads that bindand identify AUCians worldwide, according to the three guests of honor at the University’s Catalyst for Change benefit dinner in New York last week. More than 200 alumni, friends and supporters of AUC were on hand at the Jumeirah Essex House for an evening of socializing and storytelling about the best of AUC. Proceeds from the event will benefit the AUC scholarship fund.

Former Nile TV anchor Shahira Amin ‘78, actor and activist Amr Waked ’96, and CNN correspondent Ben Wedeman (YAB ’81) were presented with Distinguished Alumni Awards in recognition of their positive contributions to Egypt and in the world. In accepting their awards, all three credited AUC with giving them the educational and life skills they needed to succeed in their chosen careers — careers that require them to absorb, synthesize and accurately convey information that is relevant to the people and the future of Egypt.

The Catalyst for Change event, AUC’s first benefit dinner in the United States, was hosted by President Lisa Anderson, who called attention to the University’s determination to carry out its educational mission and to meet the needs of a new Egypt through an intense period of transition in the country.  The intent of the event was to showcase the caliber of AUC graduates in Egypt and abroad who are actively contributing to Egypt and our global society. This year’s honorees were introduced as having been among the most highly visible personalities of the revolution, reporting to the world on events in Tahrir Square over traditional and social media.  They were, for a global audience, a direct link to the tragedy and celebrations that led world news at the height of Egypt’s uprising.

President Anderson introduced the honorees to the audience, emphasizing their professional achievements in the context of their important work to report and inform during an especially consequential time in history.  “These are the kinds of people AUC contributes to the world.  However successful they are in their fields, they are also always mindful of their responsibilities as citizens of the world,” said Anderson. “They are not just smart: they are critical, inquisitive, thoughtful people.”

Amin made headlines in Egypt when she walked out of her high-profile position at Nile TV to protest the way the network enforced restrictions on reporters covering the events of the revolution.  Now a freelance reporter for CNN, Amin has returned to a weekly program on the state television network “to continue to make change from within” the media. She says she is committed to helping establish a well-trained, unbiased corps of reporters who can find and report on stories of consequence in the “new” Egypt.

Waked, an actor and producer of documentary films, leveraged social media to encourage democracy in Egypt.  His Facebook fan page received nearly a quarter of a million views in one evening in the early days of the revolution when he posted his opinion in support of the reform movement. He continues to advocate for freedom and democracy as the founding leader of the National Front for Justice and Democracy.  “I learned to think.  I learned to ask questions.  I learned that even if I fail, I benefit from trying,” Waked told the audience. “This is what I learned at AUC.  That even in failing, there are lessons to be learned.  I have to try.  I have to keep trying until I succeed, no matter what I do.”

Reporting for CNN, Wedeman sensed early on that the momentum of the late January protests was likely to generate unprecedented change in Egypt.  Wedeman provided wall-to-wall coverage of events in Tahrir Square throughout the protests for the network. In accepting his Distinguished Alumni Award, Wedeman said he was proud of the number of AUC students, faculty, alumni and staff participating in the protests and passionately supporting the unprecedented push for democratic reform in Egypt.

The Catalyst for Change dinner will be an annual event, helping to connect AUCians in the United States to the extraordinary achievements not only of AUC alumni, but the University itself.