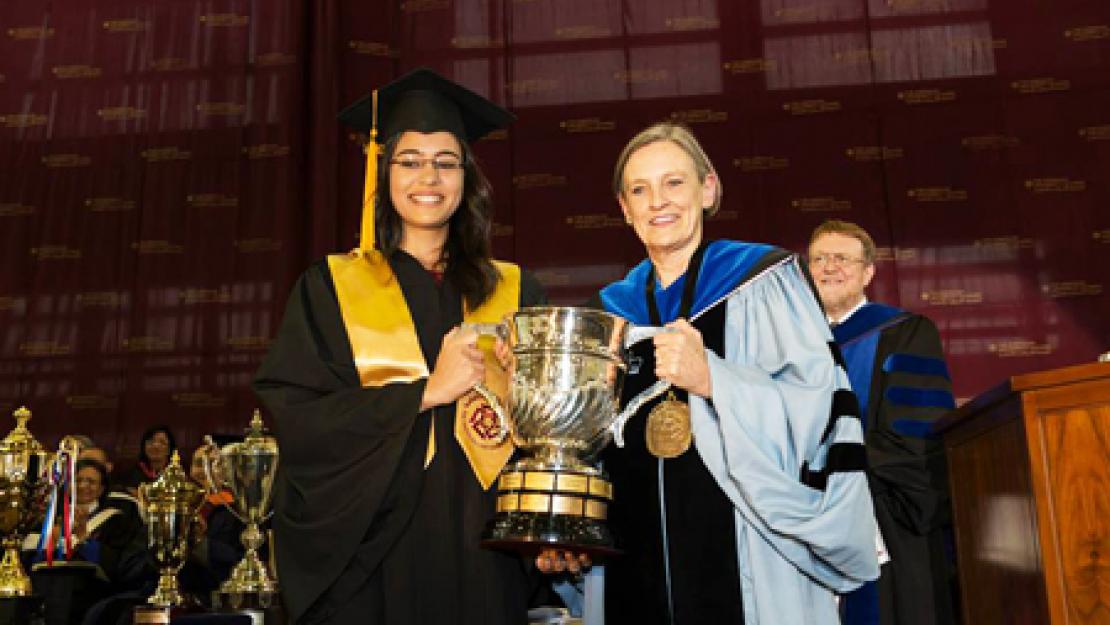 The 2014 graduate commencement ceremony will forever have a distinguished place in AUC history for being the first to award a doctoral degree from AUC. The University’s first PhD was awarded to Yosra El Maghraby, the first graduate of the Yousef Jameel PhD Fellowships in Applied Sciences and Engineering. El Maghraby holds a bachelor’s and master’s degrees in construction engineering from AUC.

“[El Maghraby's] achievement makes us proud — for her and for ourselves — as we contemplate her success, and the opportunities that she and all those who follow her will enjoy to continue AUC’s tradition of being of service to Egypt and the world,” said President Lisa Anderson at the graduate commencement ceremony.

The mid-year commencement ceremonies witnessed the graduation of 166 master’s and 535 bachelor’s degree candidates, which included 94 undergraduates who graduated with honors, 72 with high honors and 49 with highest honors. Joining these outstanding students, several named awards were distributed, recognizing students for their outstanding academic work and contributions to the community. Students who received named awards at the February 2014 commencement include:

Karim Gad, mechanical engineering graduate, recipient of the Ahmed El Mehallawi Family Award in Outstanding Academic Achievement and Community Service. “Receiving the Ahmed El Mehallawi Family Award is very meaningful for me because it represents a trophy for my fellows and I for the last four years volunteering in VIA (Volunteers in Action). I want to take this chance to thank each and everyone I know because they deserve a big part of this cup either directly or indirectly,” said Gad, who managed to maintain a high grade point average while being very active in VIA and the Student Union. “Being an AUCian is not just word, it’s an attitude or even a lifestyle. It’s the place where I developed most of my personality and character, learned how to be a member in an efficient team and how to recruit and lead an efficient team. On the academic level, I learned how to think critically and how to question almost everything,” added Gad, who plans to come back to AUC to pursue his master’s degree. Gad was also the recipient of the Student Government Cup, which is given to an outstanding student government leader who was able to make an impact on the AUC community through his or her position.

Mohamed Soliman, political science major, received the Nadia Younes Award for Public and Humanitarian Service, which recognizes graduating seniors who have exhibited the highest commitment to community and humanitarian service. The Nadia Younes Memorial Fund was established at AUC in 2004 in memory of Nadia Younes, to recognize her accomplished career with the United Nations, her outstanding character and devotion to international relations and humanitarian service. “AUC students have been given a privilege by going to this university. We need to turn that into something good for the country,” said Soliman, who is currently applying for the Egyptian Foreign Service to serve as a diplomat. Soliman received the Outstanding Student Award three times for his participation at the National Model United Nations. He was a founding member of the student group Heya, where he worked with women’s rights initiatives —  the UN Women, Harass Map and Darb 1718 —   to raise awareness about issues facing women in Egypt and work towards advancing women’s rights.​

Miriam Awni, mechanical engineering graduate, received the Mohamed M. El-Beleidy Academic Award and the associated President’s Cup, which are given biannually to the graduating seniors with the highest grade point average. “It is a great honor to be receiving this award,” said Awni. “It’s very nice that after five years of hard work to be acknowledged and recognized for my academic achievement. I feel very grateful and blessed.” Awni was a member in the International Conference on Global Economy (ICGE), where she was a participant for one year and a secretariat for the second. “It is not easy to make time for academics, extracurricular activities and sports; it requires a great deal of time management and commitment,” she explained. Awni plans to work for a couple of years to gain enough experience before she pursues a master’s degree in a field she is very passionate about, which is renewable energy. “As cliché as this might sound, I truly hope to someday make a difference in the world around me,” added Awni.

Ahmed Kenawy, electronics engineering graduate, received the Dr. Abdel Rahman El Sawy Award, established by El Sawy family in honor of the late Dr. Abdel Rahman El Sawy, the first Egyptian dean of the Faculty of Engineering at Cairo University. The award recognizes the Public School Scholarship recipient with the highest grade point average in the engineering department. “It means a lot to be recognized at the end of a five-year journey,” said Kenawy. “It is an indication that I was on the right path, which gives a potent push to start a new phase in my life.” According to Kenawy, one of the main advantages that AUC has over other Egyptian universities is the active student life represented in different clubs, organizations and associations. “Being an active participant in such life, I had the chance to greatly tune my personal qualities,” explained Kenawy. “On the academic side, conducting research with department professors was the most important experience in my undergraduate life. Classes give you a lot of knowledge. However, the nature of classes result in dispersed information that we do not usually put into use. In research, you get the chance to integrate this knowledge, apply it and further expand it.” Kenawy plans to follow the academic path by pursuing a master’s degree and following with a PhD.

Nada Yasser Sharkawy, political science graduate, received the Ahmed H. Zewail Prize for Excellence in the Sciences and the Humanities for her essay titled, “The Power of Education.” Ahmed H. Zewail, AUC trustee and winner of the 1999 Nobel Prize in chemistry, established this award to recognize AUC honors graduates who demonstrate extraordinary commitment to the pursuit of scientific inquiry and the affirmation of humanistic values.

AUC’s mission is to prepare students to become responsible and well-rounded citizens in order to face the challenges of the real world. This mission is achieved through guidance, mentoring and coaching students through vital research projects and extracurricular activities that, in turn, enhance their capabilities, cultivate among them a sense of social responsibility and understanding of differences, and improve their academic and leadership skills. Named awards honor students for their accomplishments, motivating them to continue the good work they accomplished at AUC in their future endeavors.