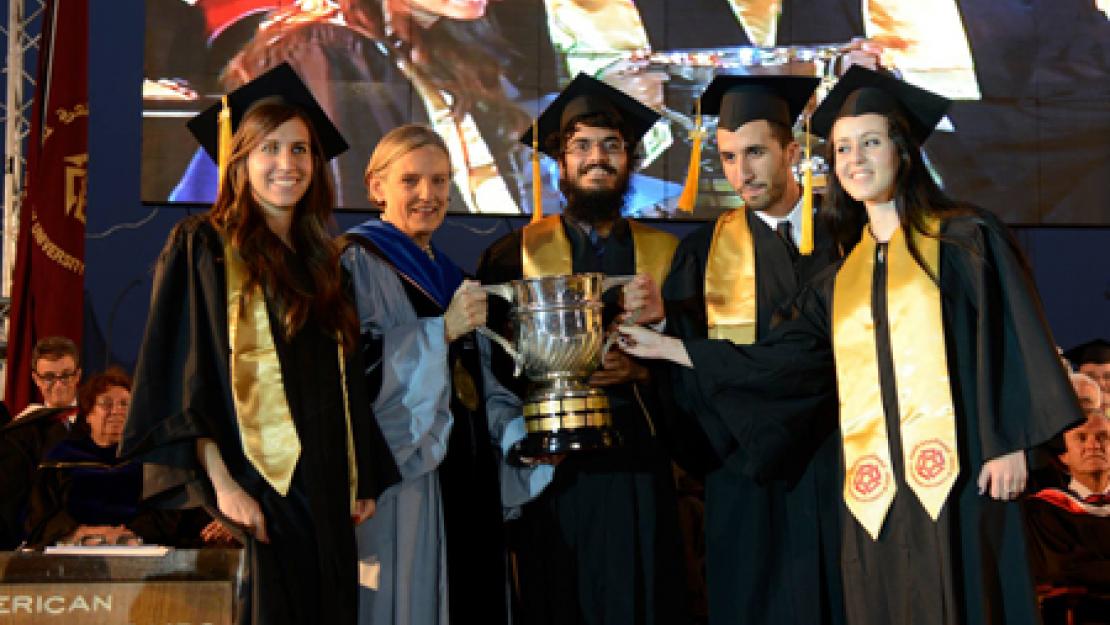 The American University in Cairo (AUC) held its Spring 2014 commencement ceremonies for 754 graduate and undergraduate degree candidates, marking the end of the 2013 - 2014 academic year. President Lisa Anderson awarded 561 undergraduate and 193 graduate students from each of AUC’s schools.

At both ceremonies, students were recognized for their academic achievements, as well as their accomplishments outside the classroom. Named awards have been established by the generous contributions of individuals and families to recognize undergraduate students for their outstanding academic achievements, as well as their participation in community service work.

Students who received named awards at the June 2014 commencement include:

Ahmed El Sayed, who earned bachelor’s degrees in both electronics and communications engineering and integrated marketing communication, received the Ahmed El Mehallawi Family Award in Outstanding Academic Achievement and Community Service, which recognizes a graduating senior who has demonstrated excellent academic achievement and has enrolled in extracurricular activities, including community service initiatives. El Sayed was an active student on and off campus, participating in several extracurricular activities and internships, and receiving awards for his creativity and hard work. He received the Best Integrated Marketing Campaign Award from the Department of Journalism and Mass Communication at the School of Global Affairs and Public Policy. He also placed second in the 2013 Kraft Foods Competition on Applying Business Solutions for Community Development and was the first runner up in the Unilever Idea Trophy, Unilever Mashreq. While at AUC, El Sayed worked at the Office of Student Development as an assistant student organization activities specialist, advising fellow students on procedures concerning organizing fundraising events, conferences and community development projects, as well as overseeing the expenditures of 10 undergraduate student organizations and Graduate Student Association. El Sayed worked at the Office of International Students and Study Abroad, mentoring more than 500 international students. He was also the president of Enactus student club, where he led a team of 170 students in implementing three community development projects across Egypt, utilizing the power of entrepreneurship. In addition, El Sayed was the electronics and communications engineering senator at AUC’s Student Senate representing his fellow colleagues. El Sayed has also interned at several companies including Nielsen Company as a consumer research intern, J. Walter Thompson as an account management intern, and  Solutions Consulting as a marketing intern in the retailing and franchising unit. El Sayed is currently working at Intel, Egypt, managing the Intel Brand Advocacy Program in 40 retail stories.

Taher El Moataz Bellah, who earned a bachelor's degree in petroleum engineering with a minor in political science, received the Ahmed Zewail Prize for Excellence in the Sciences and Humanities, which recognizes a graduating senior whose academic accomplishments demonstrate extraordinary commitment to the pursuit of scientific inquiry and the affirmation of human values.

Mostafa Ahmed Abdel Fattah, recipient of the John and Gail Gerhart Public School Scholarship and who was awarded a bachelor’s degree in electronics and communications engineering, received the Dr. Abdel Rahman El Sawy Award, which recognizes a Public School Scholarship recipient with the highest GPA in the engineering department. Recounting his time at the University, Abdel Fattah said, "My years at AUC widened my horizons a lot through the core courses. I took courses in different fields, and it helped me greatly in getting to know the world better.” Abdel Fattah, who has fond memories of encouraging and rewarding moments from his professors, has hobbies both in writing and music, and his professors made sure to develop and nurture these two talents. “What I will remember most is situations when Dr. Gretchen McCullough told me that I did very well in my Children’s Literature class chapter book, and she felt that I employed all what I learned in writing it. I will [also] not forget when Dr. Renae Timbie told us that we were awesome in the AUC Chamber Singers, or when Dr. Salah Elsheikh welcomed me in his office as a fresh graduate and complimented me with Dr. Mohamed Swillam. [They both] encouraged me to join the Masters of Science program in physics.”

Hana Shaltout, who earned a bachelor’s in political science with a minor in history and English and comparative literature, received the Nadia Younes Award for Public and Humanitarian Service. The Nadia Younes award was established in 2004 to recognize the graduating senior who has exhibited the highest commitment to community and humanitarian service. Shaltout was an active participant in the Model United Nations program and in several community service initiatives at AUC. “Throughout my time at CIMUN and CIMAL [Cairo International Model United Nations and Cairo International Model Arab League], I have had the most amazing opportunities to give back,” said Shaltout. “Starting as a member in the development program under Fatema Niazy, I had the honor to be part of the team that initiated Yadawi." A program focusing on the Batn el Baqar slum area, Yadawi teaches women different skills such as jewelry making to help them finance themselves. “The Yadawi program gave me the ultimate hands-on experience with development. Going every week and watching the women learn new skills was extremely rewarding. This experience has been unparalleled during all my years at AUC, and something that I have been proud and honored to be part of,” she added. Shaltout has also had the chance to present AUC and Egypt at the National Model United Nations and National Model Arab League abroad. “This has not only given me ,but also the opportunity to give back to my University and country.” In addition to CIMAL and CIMUN, Shaltout was a member in the Student Government Senate and Heya: the Women's Initiative student club, which is partnering with United Nations Women and Harassmap.org.

Maryan Ragheb, who earned a bachelor’s in Egyptology, received the Samiha El Barkouky Award in Egyptology, which recognizes a graduating Egyptology senior who demonstrated academic merit with a GPA of 3.3 or higher.

AUC is proud of all the graduating seniors who have benefited from AUC’s mission to prepare the next generation to become well-rounded citizens ready to face the challenges of the real world. Named awards honor students for their accomplishments, motivating them to continue the good work they accomplished at AUC in their future endeavors.