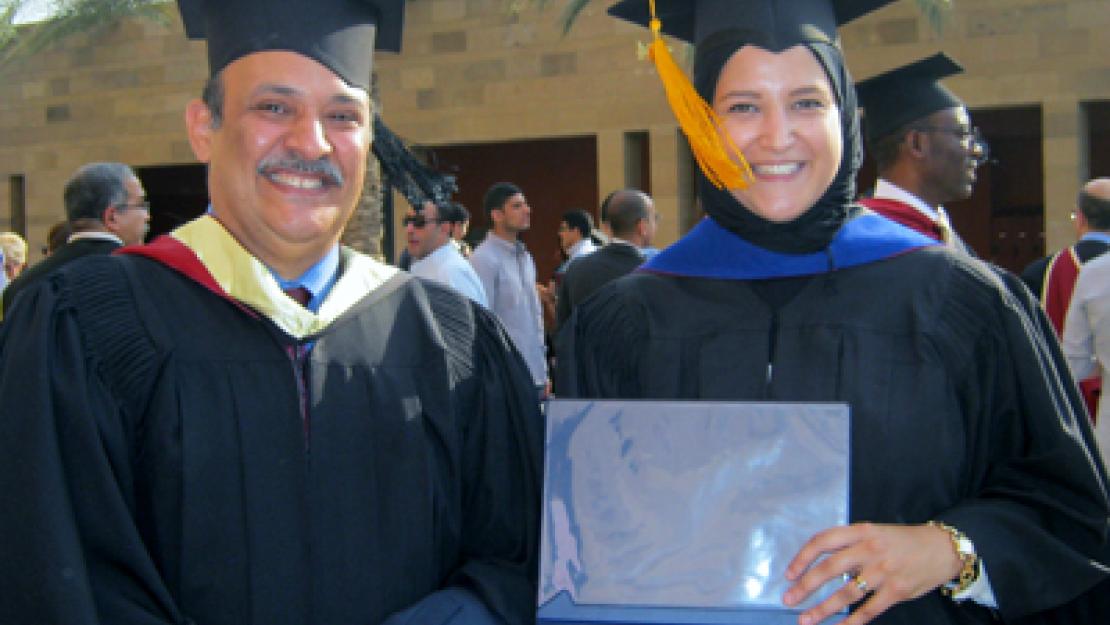 For more than five years, Reem Al Olaby ’10, ’14, a recipient of the Yousef Jameel PhD Fellowship in Applied Sciences and Engineering, has been researching and investigating ways to fight the two most dangerous diseases that are considered public health challenges in the world, Hepatitis C Virus (HCV) and malaria.

With around 170 million people worldwide infected with HCV, Egypt has the highest HCV prevalence with around 14.7% of the population infected with the virus. According to Al Olaby, there is a new drug that is considered the “holy grail,” yet it is unaffordable for many patients and it targets the HCV life cycle at a later stage.

Malaria is also considered one of the most challenging diseases imposing a heavy social and economic burden on developing countries, particularly in Sub-Saharan Africa and South Asia. An estimated 207 million people suffered from the disease in 2012, and about 627,000 died. About 90 percent of the deaths were in Sub-Saharan Africa, and 77 percent were among children under the age of five. According to Al Olaby, the current drugs to cure malaria are facing emerging resistance, which is something she sees as “truly alarming.”

As a result, Al Olaby felt it was compulsory to pursue efforts to generate new drugs to cure HCV and malaria. Al Olaby published her thesis titled, “Identification of Drug Leads against HCV and Malaria Using Different Target Proteins,” under the supervision of Hassan Azzazy, professor in the Department of Chemistry, director of the graduate chemistry program, and leader of the Novel Diagnostics and Therapeutics research group at AUC’s Yousef Jameel Science and Technology Research Center, and Rodney Balhorn, professor and CEO of SHALs Technologies Inc. in the United States. Al Olaby conducted her research in collaboration with other prestigious institutions such as the California Institute of Technology (Caltech), Stanford University, John Hopkins University, Scripps Research Institute, Rutgers University, Laurence Livermore National Laboratory, University of California Davis and Institute Pasteur De Lille.

Through Al Olaby’s research, she was able to identify a drug targeting the entry phase of HCV (Ligand 281816), which is found to inhibit HCV infectivity and block cell-to-cell transmission. A paper describing the process of identifying this drug was submitted to PLOS ONE, an open access peer-reviewed scientific journal published by the Public Library of Science. According to Al Olaby, four other drug leads were identified against malaria, two of which  showed strong inhibitory effect against Plasmodium falciparum, which is one of the most aggressive human Plasmodium species. Al Olaby’s research yielded one peer reviewed publication in the Journal of Computer Aided Molecular Design, one published patent in the United States Patent and Trademark Office, and two provisional patents. Although Al Olaby is done with her PhD, the research is still ongoing to achieve the goal of having an optimized drug against HCV and malaria.

Al Olaby came to AUC in 2008 to join the Nadhmi Auchi Young Arab Leaders Fellowship Program, where she completed her MS in biotechnology in Summer 2010. She then enrolled in the Yousef Jameel PhD program in Fall 2010. “I am blessed to have obtained my MS and PhD from AUC with the help of two prestigious fellowships. I have had the optimum pleasure and honor to be part of this prestigious institution where I truly learned a lot in different aspects of life. I was blessed to have been advised by a great professor like Dr. Hassan Azzazy who taught me how to think ahead and be practical enough to convert any assignment or effort into a productive outcome. I was also blessed to have Dr. Rod Balhorn as a great co-adviser who was always there for me and taught me a lot,” said Al Olaby.

Originally from Syria, Al Olaby earned her bachelor’s degree from the Faculty of Pharmacy at Ain Shams University. As a graduate student at AUC, Al Olaby participated in the Novartis Biotechnology Leadership Camp in Cambridge, Massachusetts, where her team was named as one of the top three groups. She also took part in several fellowship-related service events and was a temporary project manager at the Egyptian Red Crescent in their inter-educative initiative, which was in collaboration with UNICEF and the Ministry of Education. Al Olaby shares, “Throughout the five and a half years I spent at AUC, I have learned a lot, whether about research or life in general. I have learned how important it is to be patient and never lose hope when experiments keep failing you, how great it is to taste the wonderfulness of achievements after years of hard work, and above all how important it is to believe in what you are doing and believe that you are going to succeed.”

In recognition of the critical need for scientists and engineers in the Arab world and with the generous support and visionary leadership of alumnus Yousef Jameel ’68, AUC established the Yousef Jameel PhD Fellowship in Applied Sciences and Engineering in Fall 2010. The program is designed to prepare future scientists and industrial leaders who are Egyptian nationals and who have strong knowledge and skills in science and engineering. The program is intended to enable qualified Egyptian science and engineering graduates to attend AUC on a full tuition-free basis. The long term objective of the program is to develop the manpower for research and development in the region by providing the skill sets for future scientists who will be easily recruited in prominent positions in Egypt and the region.