A Scholarship Alumnus from Beni Suef: Making a Difference in his Hometown and Around the World 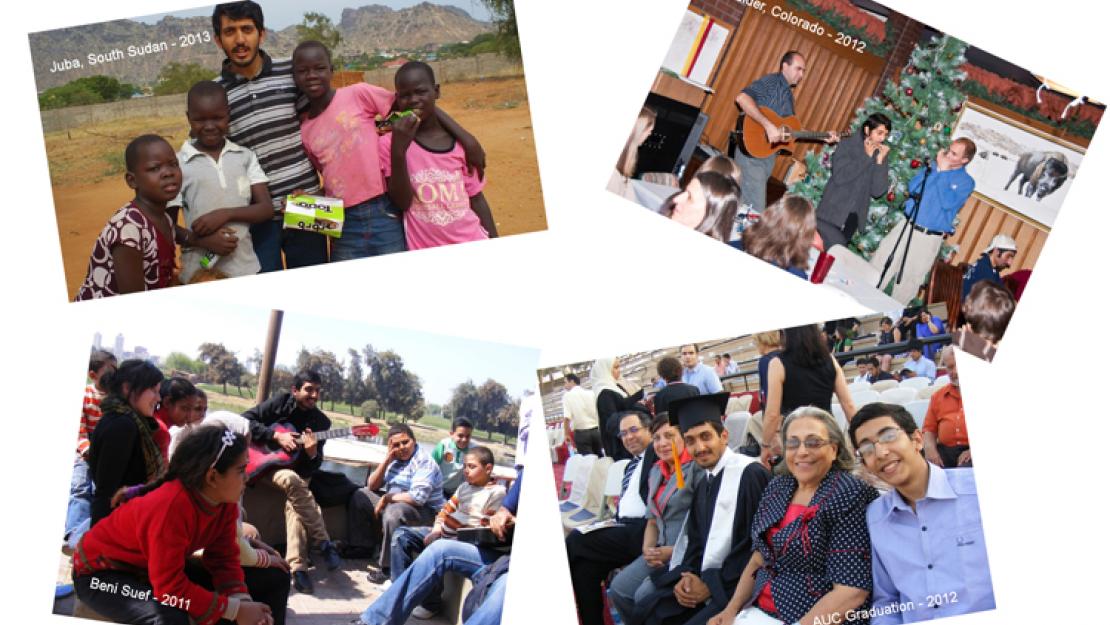 “My story testifies to the brilliance of divine providence and exemplifies transformation through empowering opportunities,” said Raeef Barsoum ’12, a mechanical engineering graduate and recipient of the Leadership for Education and Development (LEAD) program at AUC.  Prior to joining AUC, Barsoum had different expectations for his life after high school.

Having been through a governmental education system all his life, he could speak little English, if any. However, thanks to strong aspirations and a persistent volition to succeed and to make a difference, Barsoum was able to pass the English examination test to enroll at AUC in the LEAD program, after originally planning to enroll in the dental school of Ain Shams University in Cairo, Egypt.

Shifting from a medical track to a mechanical engineering major, with double specializations in industrial and power, and a minor in business administration, Barsoum was always under stress to balance his academic studies with the numerous extracurricular activities he joined and adapting to the “new world of AUC.”

Before joining AUC, Barsoum played guitar at Kinder Garden of Baraem, where he grew up as a child in Beni Suef. After joining AUC, he continued his love for music and joined AUC’s music group as a guitar player; now he plays more than seven instruments. He participated in numerous activities that shaped his character and provided him with communications and leadership skills, which helped him well after graduation. He was one of the organizers of the literacy project of the John D. Gerhart Center for Philanthropy and Civic Engagement, and was the vice president of the Art Club of Performing and Visual Arts at AUC’s Center for the Arts. He was also the head of the IT committee of the Arabic Literature Club, and a member of the IT committee of the LEAD annual conference about education, attended by government officials and ambassadors in 2007. In addition to all this, he was a creative writer and reporter for the Caravan student-newspaper and AUC Times magazine.

A few years after joining AUC, Barsoum was provided the opportunity to study for a semester abroad at the University of Colorado, Boulder, which changed his life significantly. Not only did he meet his wife, Amanda Wright, two weeks before heading back to Egypt, but the experience was “profoundly mindset-alternating.” During his study abroad experience, Barsoum volunteered in the Horizons for International Students club at the University of Colorado, where he participated in inter-cultural festivals and in activities for support of the underprivileged communities in Zambia, Africa. “Through my study abroad experience, I have developed an understanding of different worldviews and a more solid basis for comparison of various cultural influences.”

Upon his return to AUC, doors were opened for him to intern in multinational companies including General Motors, Hyundai, Vodafone and Schlumberger. “Through these opportunities, I came to realize a new point of balance, based on a broader understanding of academic requirements and its relevance to industry. These internships have added significantly to my value as an engineer, which reflected in my first professional position upon graduation. I have been appointed as an engineering director in a local electrical contracting company. Meanwhile, I have been working as an industrial engineer on another project in Juba, South Sudan for the same owner. I have traveled to Juba in March 2013 to finalize my project, while supporting other Christian Ministries who are working with street children.”

When Barsoum returned to Egypt in April 2013, he co-founded the Prodigy Academy, an association that supports the underprivileged children of his home town Beni Suef, while providing recreational activities and learning opportunities to all residents. In September 2013, he joined an American consultancy company and helped them bridge the gap between their American approach to engineering and the Egyptian market and regulations. He joined them to a trip to N'Djamena, Chad, where he was responsible for electrical and mechanical design of a building that serves as an administration base and guest house for a multinational nongovernmental organization supporting the people of Chad.

In 2014, Barsoum left to the US to join his wife, who graduated as a health and fitness specialist from Western Washington University. While working as a test and development engineer in PACCAR Inc., the third largest manufacturer of trucks in the world, Barsoum continues to work on translation and community service initiatives with both Egyptians and Americans. Barsoum and his wife passionately await their first baby boy by May 2015. “From a dentist to an engineer, from two pieces of metal and a rubber band to seven musical instruments, and from insignificant volunteer opportunities to published books that touch people around me — I say it’s the power of transformation through continuous learning and foremost, God’s grace.”