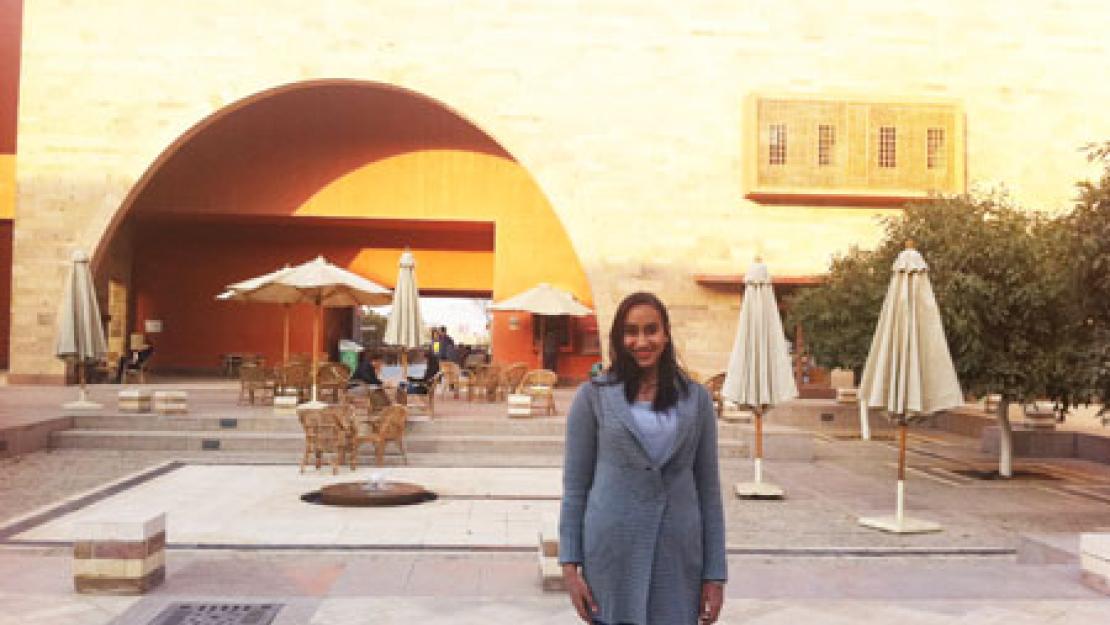 Oil painting, playing tennis, swimming and of course reading are some of the hobbies of Yumna Moussa, second recipient of the Joseph Van Vleck Endowed Scholarship. After joining AUC in Spring 2015, Moussa started to develop new interests. She is now a member of the Robotics Club, the Cairo International Model Arab League (CIMAL) and Developers Inc. club.

“Ever since I was a child, I have always set goals for myself. Joining AUC was one of them,” said Moussa. “I always saw myself as a physics student at AUC and I believe that if I didn't believe in my ability to pursue my dream, I wouldn't have been able to actually accomplish it. Thanks to the Joseph Van Vleck scholarship, I can proudly say that I am an AUCian.”

Established in 2011 through a bequest from former AUC trustee Joseph Van Vleck, the Joseph Van Vleck Endowed Scholarship supports two Egyptian students (one male and one female), who come from outside of Cairo and demonstrate financial need. Moussa is originally from Assiut, and spent 10 years of her childhood in Saudi Arabia and then returned to Assiut for high school.

Moussa joined CIMAL to become more aware of the underprivileged sectors of the Egyptian society and to develop her communication skills, and the Robotics Club to develop her critical thinking skills and to think more creatively. “The Robotics Club is teaching me various ways of applying my physics education in the practical world. So far, I have learned how to built robots with ultrasonic sensors, and soon there will be a maze competition amongst club teams using robots,” she said. The Developers Inc. club will complete the loop for a well-rounded person, equipping Moussa with leadership and public speaking skills. “As members of the developers club, we are trained to train other people. We are taught various teaching techniques and we are constantly encouraged to try to understand our personalities and abilities in order to know how to utilize our skills in teaching others and in becoming leaders.”

Moussa declared physics as her major and political science as a minor. She enjoys many subjects but chose physics because it offers her a challenge. “In physics, I am constantly challenged to find my own way in relating laws and equations to every day life and my ability to differentiate between what is important and what is irrelevant is incessantly put to the test,” she explained.

Moussa admires the quality of teaching here at AUC, especially in the physics department. “Dr. Salah El-Sheikh, chair of the physics department and my current professor, uses one of the best teaching techniques I have ever seen,” stresses Moussa. “He starts every new lesson by writing a problem on the board and asking us to solve it. Since the problem is an application to the new lesson we are about to take, the whole class doesn't know how to solve the question initially. But then Dr. Salah asks us to tell him all the equations we know that we think might be used to solve this question. After listing all the equations we gave him on the board, he would then ask us to identify what we need to get in order to solve the equation and tells us to use any of the equations we listed. Eventually, we would come up with a new set of equations that are required for this lesson,” she explained. “Dr. Salah’s technique has helped me understand how scientists come up with these equations. He certainly challenged my critical thinking in order to help me think as a physicist and has prepared me to come up with solutions to problems that do not exist yet.”

From the extracurricular activities Moussa is joining to the stimulating academic environment in the classroom, she is certainly developing her character and acquiring new skills that will prepare her well for life after graduation. “The fact that AUC provides a liberal arts education will make me well-rounded after I graduate,” explained Moussa. “Being an AUCian means that I have succeeded in finding a way to pursue what I love despite all the setbacks throughout my life. It signifies my motivation and my desire to become the best. The professors in the Department of Physics at AUC are among the best in the Middle East. They've done great projects with big names such as MIT (Massachusetts Institute of Technology) and with governmental institutions. The fact that I will be spending the four years of my undergraduate life studying under such accomplished professionals guarantees to me the availability of the resources I need to become a world-renowned physicist.”

As she always likes to plan ahead, Moussa is well-aware of her future plans. “I want to start my research as an undergraduate in cosmology, specifically about black holes and dark matter. I then want to pursue a master’s degree and PhD. My long-term goal is to do research and teach. I’ve known this since I was seven years old, and I love to set plans. I also really liked some advice I got during FYE (First Year Experience program) — a plan is not made to be filled but made so you can know what you will go through.”

For Moussa, being an AUCian means pushing herself to the limits and discovering things about her character that she would not have known otherwise. “I honestly give my greatest gratitude to the Van Vleck family for giving me this opportunity. I would certainly love to achieve something that will live up to the name of the scholarship.”

Omar El Said is the first recipient of the Joseph Van Vleck Endowed Scholarship. El Said is originally from Mansoura and joined AUC in spring 2011 studying petroleum engineering. He has been placed on the Dean’s Honor List since his first semester.