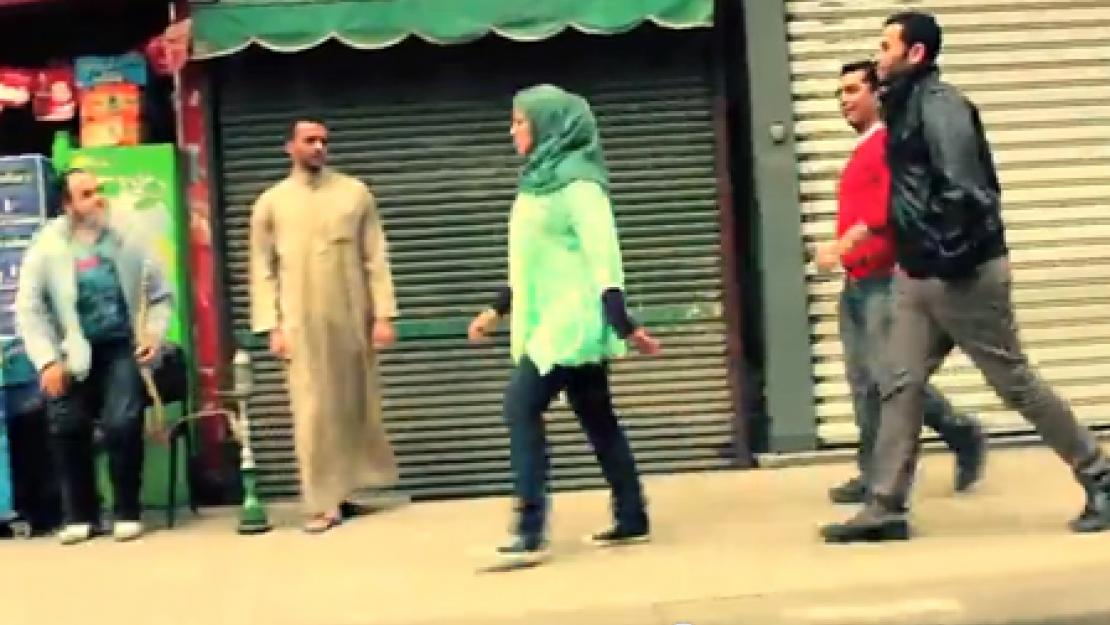 A recent study by the World Health Organization found that the rate of domestic violence worldwide was the highest in the Middle East and Africa, with 37 percent of women reporting physical abuse at the hands of their partners. Three AUC graduate students produced public service announcements (PSAs) to educate Egyptians about domestic violence in order to raise awareness about the issue, which they found was not adequately addressed in local media.

“Domestic violence is an issue that causes so many other major problems in our society, such as the number of street children,” said Inas Hamad, a graduate student in public policy. “This is a problem people all over the world are facing, not only in Egypt, but the reasons behind it might differ. We were surprised to find that such an important issue was not addressed well by any PSA in the region.”

Hamad, Zeina Rawabdeh and Amal El Nakib produced three PSAs about domestic violence as part of a graduate course created and taught by Nile El Wardani, adjunct professor of public policy and administration. The course brought together public policy and digital journalism students to create PSAs, in collaboration with community organizations. Other students in the class produced PSAs on sexual harassment and trash.

With support from Psychological Health and Awareness Society (P.H.A.S.E.), an Egyptian nongovernmental organization that provides psychological treatment for victims of abuse and trauma, the students spent three months researching and conducting focus groups to write the scripts for the PSAs. “We used true stories told to us by people in the focus groups and produced mini-dramas with volunteer actors to reenact real life scenes,” Hamad explained.

Based on their research, the students produced three separate ads, which they casted, shot and edited themselves. “We wanted to inform the Egyptian public that violence is not only physical, but can be verbal or emotional,” said Rawabdeh, who completed the MA program in television and digital journalism. “When we did our focus groups, 80 percent of women had not been subjected to physical violence, but were psychologically damaged. We found that, sometimes, emotional or verbal violence can be more hurtful, but for some reason in the Arab world, when you mention domestic violence, what comes to mind is physical violence. So the message in our first PSA was ‘By the way, all of this is violence,’ and we showed clips from different households where women are being subjected to different types of abuse.”

The group’s second PSA addressed women who have suffered domestic violence, encouraging them to seek help, whether it be from a friend, family member or a community organization, while the third dealt with the societal aspects of the problem. “We talked about how we are all part of a cycle of violence,” Rawabdeh explained. “This is not only a problem between a husband and his wife. Children are part of the cycle, as are older people and other members of a family. We are talking about it as a generational problem, because growing up, a child might see his mom being a victim of violence of some kind, and he might hate it, but subconsciously he internalizes this and may end up doing that to his own wife or sister when he grows up.”

Tackling another social issue, students Mary Habib and Aya El Medany teamed up with HarassMap, an organization that documents incidents of sexual harassment in Egypt, to produce two PSAs about sexual harassment. “We chose this topic because it has become an alarming problem nowadays in Egypt,” explained Habib, who recently completed a master's in television and digital journalism. “People tend to blame harassment on girls and women walking in street, completely ignoring that women should have full human rights to live their lives normally.”

Habib and El Medany also conducted extensive research, in collaboration with HarassMap, before beginning the process of writing and producing the PSAs, to determine the best message to reach their target audience and avoid repeating work that has already been done as part of anti-harassment campaigns. Their PSAs recreated harassment experiences documented by HarassMap, using actors from AUC's theatre unit. “In our first ad, we screened short clips that encouraged the audience to consider potential reasons behind sexual harassment and to think about ways people's behaviors should change,” said Habib. “In the second, we depicted the experience of a niqabi woman who was harassed by walking in the street. In this ad, we focused on what is going through the woman's mind as she blames herself, rather than the people responsible, for what has happened to her.”

Hamad, Rawabdeh and Nakib appeared on CBC’s El Setat Mayi3rafoosh Yekdebo (Ladies Cannot Lie) to discuss their PSAs, which were screened on the channel. The PSAs were also screened on MBC Masr during an interview with representatives from P.H.A.S.E, in addition to being shared via social media. Nevertheless, Rawabdeh said, reaching a wide audience has been difficult because of lack of knowledge about PSAs in the region. “In the Arab world, we don’t have the culture of PSAs,” she noted. “There isn’t an Arabic term for it. It is starting to get out there, but still, not many channels are interested in airing PSAs, as they would prefer to make money from an advertisement. A lot of people in the Arab world don’t know what they are.” El Wardani added, “PSAs certainly exist in Egypt and North Africa, but they are not institutionalized as in Western countries. In the United States, for example, there are regulations with regard to the amount of airtime on television and radio that must be reserved for PSAs. In Egypt, there are no laws or regulations in place regarding airtime, and when PSAs are produced, the content is inaccurate or the production level is low.” El Wardani was motivated to design the class to fill this void by pooling the talents of students with different backgrounds. “In the class, public policy students were paired with digital media students to bring the ‘content people’ together with the ‘media people’ in order to create PSAs that could educate the public in a non-didactic way to produce results and inspire behavioral change,” she affirmed. “The general public does not digest information when it is presented in a dogmatic, scholarly way. A successful PSA campaign presents important social messages in the context of a story that people can relate to.” Habib affirmed that the PSA format would enable potential audiences to think about harassment in a new light. “In our first PSA, we used a symbolic strategy,” she explained. “By showing simple situations, we pushed viewers to visualize the message for themselves, without telling them directly. The second PSA relies on an emotional appeal, as we guide viewers to relate to the victims of harassment and consider different ways to overcome this problem. Presenting the message visually makes it easier for viewers to swallow.” The class is open to master’s students only, and media students must be in their second year so that they already know how to use the equipment and produce videos. While all of the students in the first iteration of the class were from the public policy and administration department and the Kamal Adham Center for Television and Digital Journalism, El Wardani hopes to open up the class to students with different focuses and areas of expertise to produce as many PSAs as possible about a variety of concepts. “A course such as this is an excellent way for AUC students from different disciplines to work together and, at the same time, to work within their communities and provide a real service to their country during this transitional period,” she affirmed. El Wardani is also optimistic about the possibility of further collaboration with NGOs and community organizations, as well as potential partnerships with international organizations and the Egyptian government. “There is space in the new government to tackle issues that had not been discussed openly before, and PSAs are a great vehicle to educate the public about everything, from hepatitis C to voting rights,” she assured. “We already have requests from the United Nations Development Programme and the World Health Organization to explore working on regional women’s issues and empowerment by collaborating to produce PSAs to air on regional satellite channels.” Hamad and Rawabdeh both plan to utilize what they learned in this course in their future work. “I work in the World Health Organization, and one important part of my job is to arrange advocacy materials and awareness campaigns on health-related issues,” said Hamad. “PSAs are one of the tools used to promote community awareness. In this course, I learned a lot about media production, as well as how to approach community organizations and how to use media to tackle public policy issues.” Rawabdeh, who has returned to her native Jordan to pursue a career in TV journalism, also values the skills she acquired from the course. “This was the first project that I produced from beginning to end,” she said. “I learned that PSAs can be really strong, yet inexpensive. They take time and effort, but they are doable, and many people will offer their help for a cause they believe in.” To view the students' PSAs,click here. Photo caption: Part of the public service announcement on sexual harassment, produced by graduate students at the Kamal Adham Center for Television and Digital Journalism.