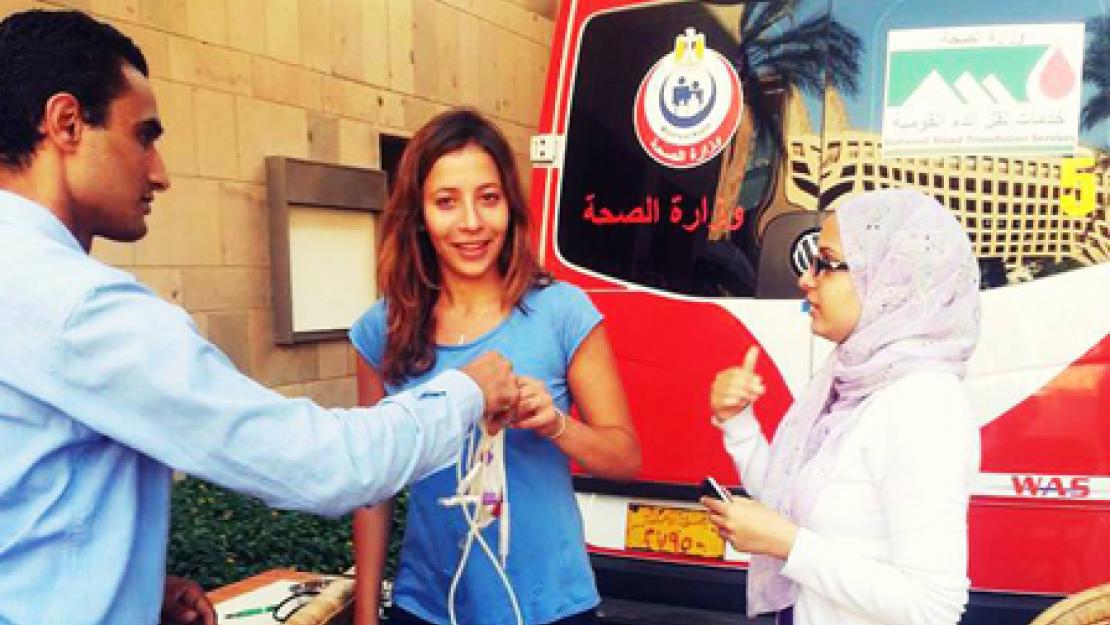 The ambulance parked in the corridor leading to the bus terminal at AUC New Cairo during the past weeks was not a cause for concern, but a sign of the AUC community’s ongoing commitment to service, as 137 AUCians donated blood during a campaign organized by Resala AUC and the Anti-Cancer Team (ACT) student clubs in mid-September and nearly 200 donated during a campaign organized by the Office of Medical Services last week.

“Blood is something that is almost always needed and that most people as young as 18 and as old as 60 can give,” explained Ali Abdel Latif, president of Resala.

Aya El-Serw, president of ACT, noted how blood donations are important in the fight against cancer, particularly for children. “We are committed to fighting cancer and trying to help others,” said El-Serw, adding that leukemia, a cancer of blood-forming cells that originates in the bone marrow and quickly invades the blood stream, is the most common cancer in children. “Children with leukemia need blood transfusions frequently, so we are trying to help them by collecting blood.” ACT has organized blood drives in the past, and will be holding one during the club's Leukemia Awareness Month in March 2014.

The 137 bags of blood collected during the drive were donated to Al-Mohandiseen blood bank, which provided the ambulance, equipment and medical crew for the drive. “Most of the blood goes to government hospitals, private and state-run cancer hospitals, as well as patients suffering from Mediterranean anemia,” said Abdel Latif. “If there are sufficient blood bags, they are sometimes delivered to private hospitals.”

The Office of Medical Services provided assistance to student clubs for the drive, ensuring the safety of the equipment used to collect the blood. “The AUC clinic has a history of working with students on blood donation campaigns, as well as other health initiatives, dating back to when AUC was located downtown,” said Dr. Mohamed Amin, director of medical services. “AUC students have always been very enthusiastic and willing to help in any way they can. Without them, these initiatives would not have been successful.” In addition to working with the students, the Office of Medical Services collaborated with Kasr El Aini Hospital to organize a blood drive last week, which collected 200 bags of blood. The hospital set aside 10 percent of the blood donated for members of the AUC community to use if needed.

While some people who wanted to donate were unable to because of underlying health issues, “most people can donate blood every three months,” Abdel Latif affirmed. “Therefore, ACT and Resala AUC intend to hold a blood drive every three months, or four blood drives per year.” The next drive will be held in December.