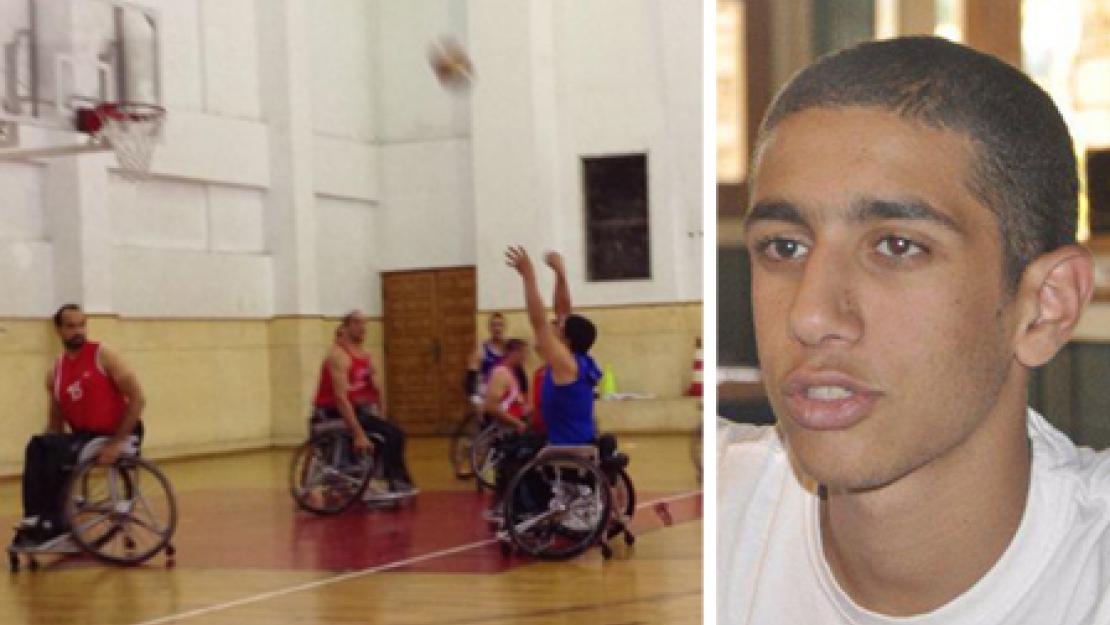 Alhassan Sedky, an actuarial science sophomore, has been playing basketball since he was 8 years old. His love for the sport is noticeable when he passionately discusses his favorite team, the Los Angeles Lakers, and its star player, Kobe Bryant. But two years ago, just as Sedky was about to start his first semester at AUC, he was in a car accident that left him paralyzed from the chest down.

“I stopped playing basketball,” Sedky said. “I didn’t have any idea that they had sports for handicapped people.”

Sedky began to understand the opportunities that were available to him after traveling to Germany for rehabilitation. He found out that he could still play the sport he loved. Sedky now trains with Egypt’s National Paralympics Basketball Team, and he hopes to compete in Brazil’s Paralympics in 2016. Sedky also competed in a swimming competition at the Egyptian Cup Tournament, where he won a silver medal in the 50-meter backstroke and a gold medal in the four-person relay. Winning these medals strengthened Sedky’s determination and willpower.

“I’ve never had that feeling before,” he said. “I was very happy and, at the same time, I didn’t believe it.”

Although Sedky is not an official member of the National Paralympics Basketball Team, he practices with them and learns tips from the team’s seasoned athletes. “I’m the youngest member, so I learn a lot about how to get better from the other teammates,” Sedky said. “It’s productive for me.”

The team is now training for the fourth African wheelchair basketball championships in Angola, which begins on October 26. To train for these championships, Sedky attends practices day and night. “When we have a championship, there’s a camp set up, and we practice two times a day — once in the morning and once at night.” The training may sound grueling, yet Sedky is always content when he’s on the court.

But finding opportunities to play sports in Egypt was rather complicated for Sedky. “After having his accident, we really suffered because we didn’t know how people manage things here for wheelchairs because of the lack of facilities,” Sedky’s mother, May Zein El Dein, said. “When we came to Egypt, we started asking around everywhere if they have sports activities, but it was extremely difficult.”

Zein El Dein decided to take the matter into her own hands and established the Alhassan Foundation for Spinal Cord Injury, which aims to provide facilities, rehabilitation and reoccupation for people on wheelchairs. Knowing her son’s passion for sports, one of the first steps Zein El Dein took for her organization was to find a team that her son could play in.

She partnered up with the Shooting Club to create a team for young, differently abled athletes. “The whole concept of sports [for the differently abled] is very immature in Egypt, so we are starting from scratch,” Zein El Dein said.

Sedky’s mother has big goals for him. “I don’t want to dream for him,” she said. “I would like him to be a happy, successful and content person with whatever God gave him. But I would also like him to be a representative for physical disability and wheelchair-users not only in Egypt, but the entire Middle East.”

For now, Sedky is studying hard for his exams, playing basketball and practicing at the gym. He is appreciative of the opportunities that AUC has afforded him. “I find learning at AUC an enlightening experience,” he said. “Getting to meet students from different cultures and having access to all the different facilities on campus makes life easier,” Sedky said. He chose to study actuarial science because “it’s something relatively new in Egypt and the world.” He hopes to either pursue graduate studies or start a business.

“I feel proud,” his mother said. “I have been proud of him before the accident and proud of him after. I now look at him with more respect because he is not giving in. He goes out, has fun and plays sports. He hasn’t changed.”