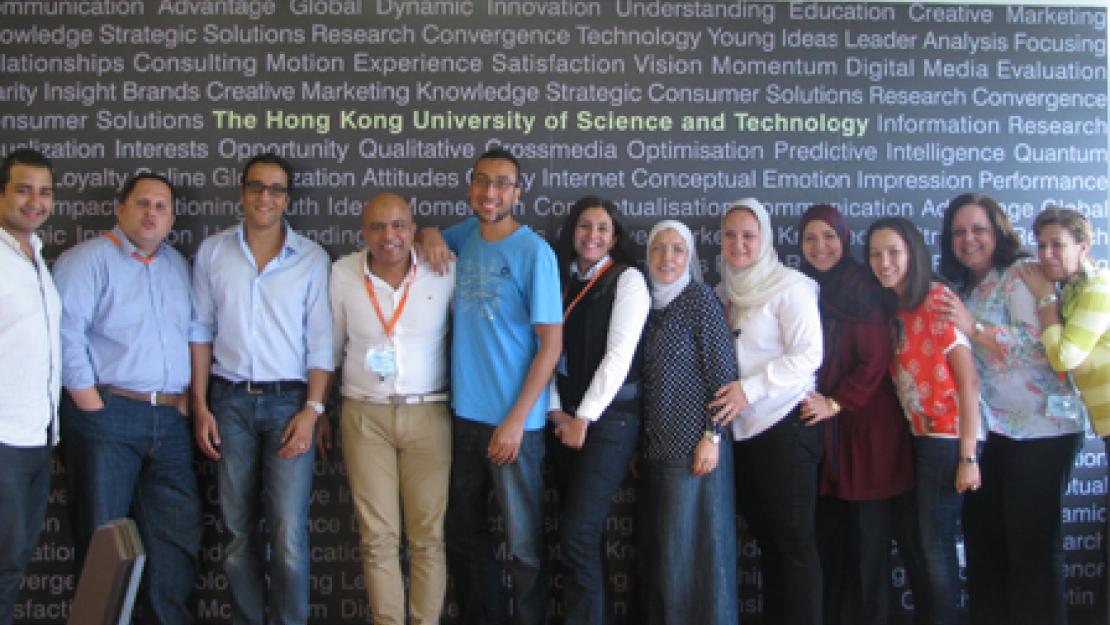 This past summer Yasmine Helal, e-Business Head at Citibank and an AUC alumna, found herself exploring Hong Kong’s business world through the University’s Executive Master of Business Administration (EMBA) program. For two weeks, Helal met with top executives and visited world-class research centers in a region that Forbes has ranked as among the best places for business. “I really appreciate that the EMBA has given me such a golden opportunity,” Helal said. “I had the chance to sit, meet and discuss different topics with established Chinese business leaders, scientists who are ranked among the top 10 worldwide and highly qualified professors coming from different parts of the globe offering you the world on a golden plate.” Helal completed her Master of Science in computing at AUC and has spent 10 years in the business world. But she felt the need to seek out something more. “After 10 years in the professional field, you reach a level in your career where you need to have an edge that would pave the road for you to the next big step,” Helal explained. “As a senior employee, I need to be aware of many areas in the business field that I am lacking, and I wanted to address this gap practically, not just academically. This was the main reason I applied to the EMBA program, as it is the bridge that would fill up this gap addressing both ends, the academic and the practical.” Designed for experienced executives, the EMBA program focuses on integrating innovation, entrepreneurship and leadership in management education. The program involves live-in weeks at the Kellogg School of Management in the United States and The Hong Kong University of Science and Technology, which allows participants to be immersed in an international setting. Through EMBA, Helal visited China Overseas Grand Oceans Group and the Hong Kong Science and Technology Parks. She also visited The Peak, one of the highest points in Hong Kong that offers a view of the entire city. Her days were filled with classes and hands-on projects that dealt with the latest businesses trends. Helal found that she not only learned more about business, but also gained insight into a different culture. “The learning outcome of this trip is very difficult to put into words, as there was so much of an indirect learning experience acquired –– much more than the academic objectives that are listed,” affirmed Helal. “It was a cultural, academic, professional and entertainment mix that enriched us. It was a great eye-opening experience, teaching us how we should perceive the other and give ourselves the chance to open up, absorb and understand different cultures. We should work together for mutual gain instead of building mental blocks due to cultural differences or simply starting off on the wrong foot due to cultural ignorance.” Helal noticed several similarities between Egypt’s business world and Hong Kong’s entrepreneurs. “Hong Kong is a business community that is very dependent on contacts and networking, which is similar to Egypt, yet the variance would be in the process of implementation,” she said. “However, if I was asked this question before this trip, I would have filled two A4 pages with how Hong Kong is different from Egypt in doing business. The numerous similarities only became clear to me after being introduced to the Chinese culture and background, which enabled me to objectively assess our common interests and mutual opportunities to do business.” For Helal, this business trip to Hong Kong expanded her worldview as a professional. “[These] trips are very important and critical to us as professionals,” she affirmed. “It gives you a wider view on the what is going around outside your borders, and when I use the word borders here, it does not only refer to the geographical borders. It addresses mental borders as well.” Photo caption: Yasmine Helal (pictured fifth from the right) and other EMBA students at the Hong Kong University of Science and Technology