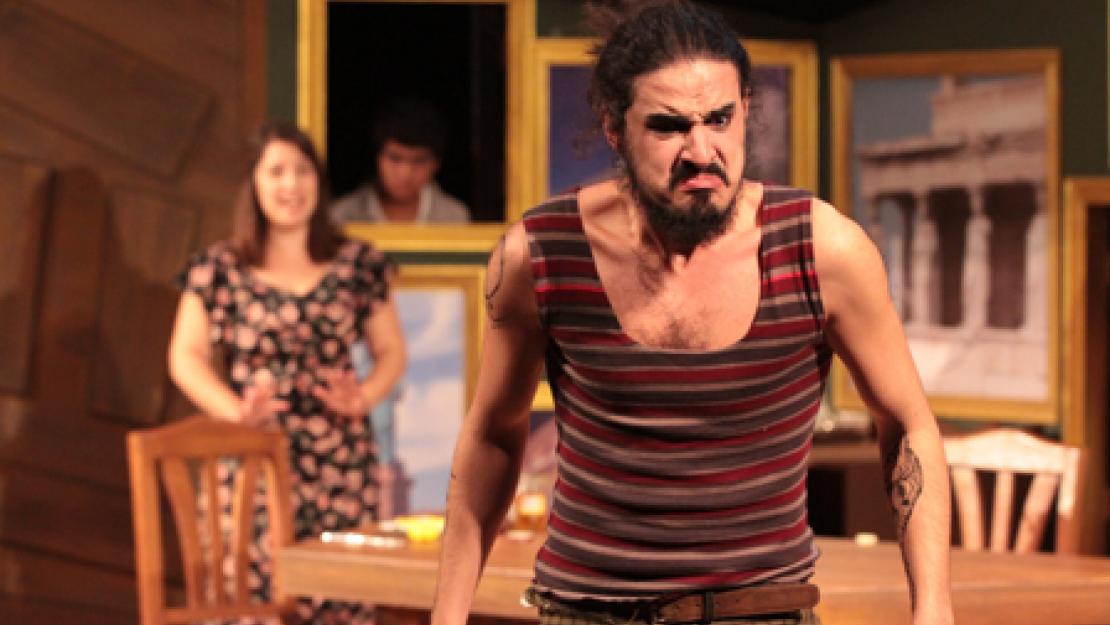 Approximately 15 students have spent more than 100 hours rehearsing for their performance of Max Frisch’s The Arsonists, which opens today at 6 pm in the Malak Gabr Arts Theater. The critically acclaimed play is a dark comedy set in a city that is being terrorized by arsonists. The play explores the connection between moral hypocrisy and social menace by following the story of a businessman who opens his door to two charming arsonists bent on destroying his home. “The Arsonists is a play about how one responds in the face of evil,” said Frank Bradley, associate professor in the Department of the Arts and director of the play. Written right after World War II, the play is often noted for its commentary on chaos and making choices in the face of extreme stress — themes that still resonate today. “It is a story for all times and places,” said Youseff Sallam, a political science junior who plays the arsonist Eisenring. The play uses humor to explore its somewhat dark themes, with moments where actors break from the scene to address the audience and a chorus of firemen that follows the action. “The play is little bit offbeat,” Bradley said. “It combines farce, dark humor and menace in a way that is provocative and entertaining.” For Bradley, the energy the students put into the play was amazing. “The thing that has impressed me is the enthusiasm they have for the play,” Bradley said. “Nobody expected their total embrace of the style of the play, the message of the play and the fun of the play.” Mohamed Ahmed, a communication and media arts senior who plays the role of the businessman Biedermann, has been acting for two years and was in last semester’s production of A Midsummer Night's Dream. Ahmed found it a bit of a challenge to play the pompous businessman Biedermann. “It’s more serious than other roles I’ve played, even though it has comedic elements,” he said. “There is also plethora of subtext that can be easily missed, and after coming from a Shakespearean play where there is virtually no subtext — all that needs to be expressed is said — to a play where nearly every sentence has another meaning behind it, is a little tricky, but very exciting when done right.” For other students, this is their first foray into acting. “This is my first ever performance,” said Sallam, who enjoys playing the cunning arsonist Eisenring, whom he found shared many of his own attributes. Both students were struck by the intricacies of the play. “What I found most interesting about this play was how the excruciatingly obvious truth is not believed, either out of fear or stupidity,” Sallam said. “What I got out of it is that we surrender all too easily to fear.” Ahmed also noted how the play provides an insight into the human psyche. “It’s a very human play,” he said. “It gets you thinking about how the way you behave toward others and the way you carry yourself through society can lead to certain unexpected results –– good or bad.” In addition to the opening night, The Arsonists will be performed on November 21, 24, 25 and 27 at 6 pm and November 26 at 5 pm. Tickets are on sale for LE 20 at the AUC Theatre Box Office at the Center for the Arts, AUC New Cairo. Photo courtesy of Amira Gabr