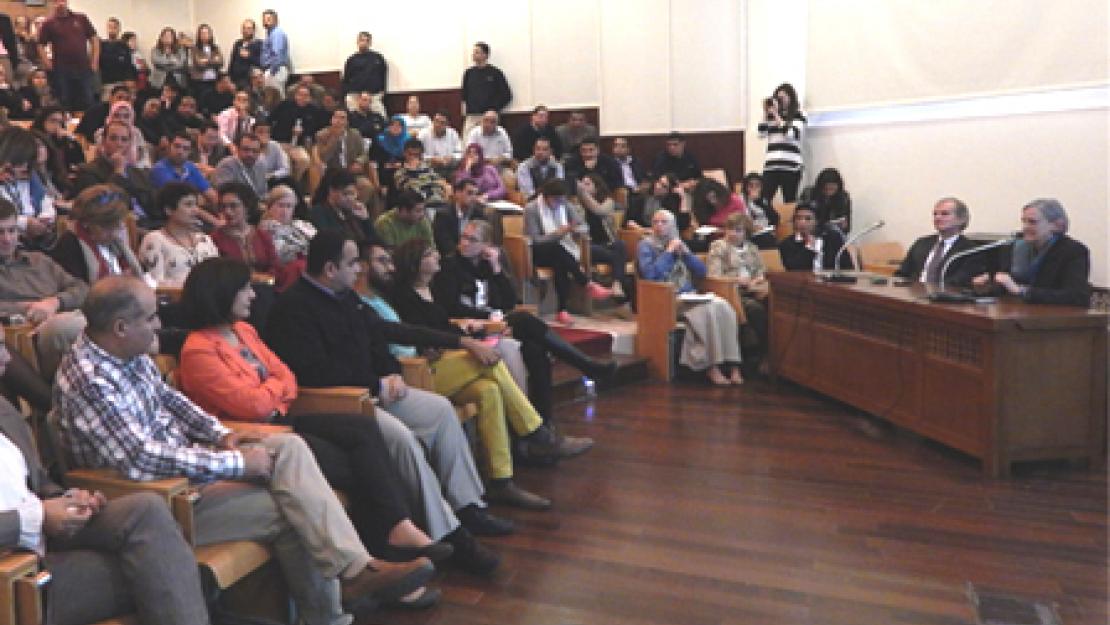 The University is forecasting a $9.7 million budget deficit, mostly attributed to the unexpected drop in tuition income from international students, noted Brian MacDougall, executive vice president for administration and finance, in a University forum held yesterday.

MacDougall explained that the budget, which was approved by the Board of Trustees in March 2013, did not anticipate the series of events following June 30, which led several countries to issue a ban on travel to Egypt. The political turmoil and subsequent travel ban led to a dramatic drop in international student enrollment. “The largest single item that has changed is tuition income,” MacDougall explained. “We missed the mark by about $10.6 million.” Because of the drop in tuition income and other factors, the now expected year-end forecast shows a net deficit of $9.7 million, as opposed to the approved budget of a surplus of $0.03 million.

A task force has been working for the past few weeks to develop approaches by which the University can achieve savings, proposing ideas such as implementing a hiring freeze for vacancies, the postponement of salary adjustments, constraining social function budgets, limiting trips for professional development for this year and several other options. “We have made no decisions yet,” affirmed President Lisa Anderson, “and the purpose of this forum is to solicit your suggestions, your reactions and your thoughts about what we ought to do as a community to address this deficit.”

Anderson explained that the needs of each department will be taken into account when it comes to hiring freezes. “We’re going to try to do this in a way that protects the needs of each office or department,” Anderson said. “I would like to put together a group that would look at this on a local scale. Some units have redundancies and don’t need to replace people, and some do and we can’t tell that from very far away. It has to be a local process so that we can be fair and say no when we should, but not say no all the time.”

Others expressed concern about how decisions regarding the budget will be made. “We have been told that a task force for the budget has been created, but this task force is not a sufficient answer because it does not represent the University community,” noted another faculty member. “However, we do have institutions of elected people here on campus that represent faculty, staff and students. I strongly believe that having a group of elected representatives working with the administration would provide much clearer and better feedback, and would make budget decisions far easier to implement.”

In addition to a more representative University budget committee, other forum participants offered new ideas for reducing the budget deficit. One student suggested using a unified bus service for all faculty members, students and staff, as well as maintenance, housekeeping and security personnel. Others remarked that salaries of administrators, managers and faculty members be reduced by approximately 1 percent to increase savings. A staff member noted that one way to tighten the belt is by not hiring outside consultants, but instead utilizing the human capital already at the University. A work-study student suggested a more careful examination of the vendors the school uses to buy its supplies so that future purchases would be more cost-effective.

Others advised implementing more “macro” changes. Noting that the University has an endowment of $500 million, faculty members suggested that the University withdraw a little bit more from the endowment during this time. Anderson acknowledged the importance of these macro solutions, but also noted that the University needs to look toward the future. “The endowment provides income in perpetuity for supporting our activities, so before we make these major decisions, we need to think about future generations as well,” she said.

Several people also suggested accepting more local students to make up for the drop in international student enrollment. However, Anderson noted that most international students come to AUC to study Arabic, so Arabic-language units are currently underutilized. If more Egyptian students are admitted to the University, they would join the other programs that are already at full capacity. “This creates pressures, particularly in certain departments,” said Anderson. “We do not want to increase the number of students just for financial reasons.”

Closing the forum, MacDougall highlighted the importance of all these proposals. “We are committed to consultation and collaboration,” he said.

Anderson also emphasized the importance of open communication. “We want to hear all your suggestions, even if it has to with the reduction of a small amount of money, because these small things do add up,” she affirmed. “As you can tell from the enthusiasm this forum has generated, we have a lot of work to do, and I want us to be able to do this work together and with a consultative frame of mind.”