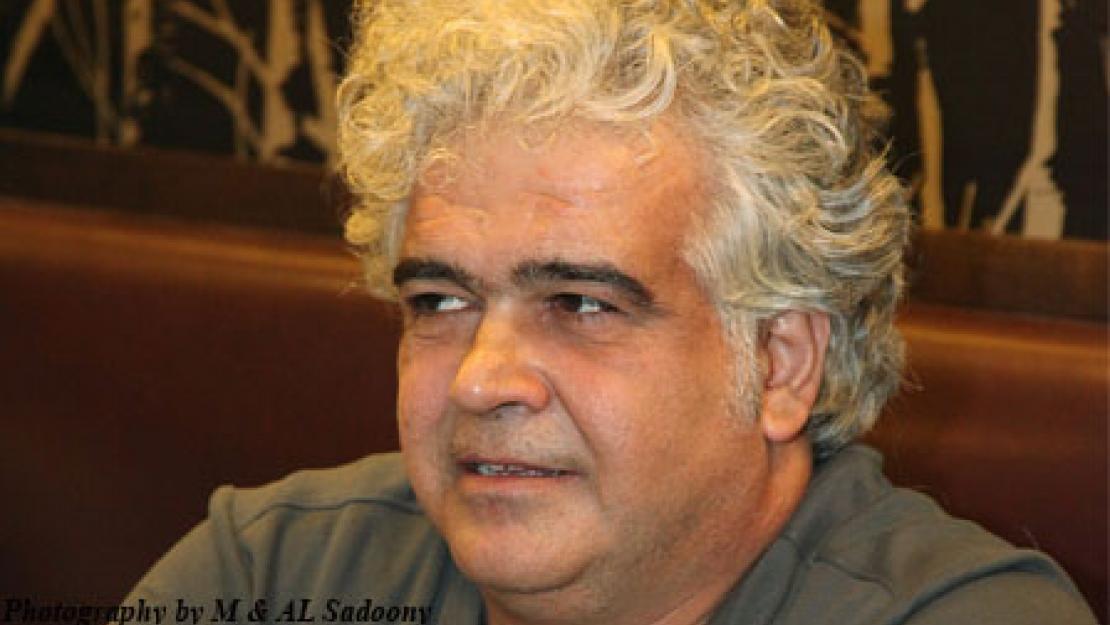 Syrian writer Khaled Khalifa was awarded the 2013 Naguib Mahfouz Medal for Literature for his novel No Knives in the Kitchens of this City. The Naguib Mahfouz Medal for Literature is given to the best contemporary novel published in Arabic, but not yet in English, and is selected every fall by the Mahfouz Award Committee. “No Knives in the Kitchens of this City is an ode to Syria that powerfully chronicles Aleppo’s story for half a century,” said Tahia Abdel Nasser, assistant professor of English and comparative literature and a member of the award committee. “This is the novel of contemporary Syria, which explores destruction, death, and desolation so hauntingly. With admirable courage, Khaled Khalifa masterfully writes about the solitude of one family, the ruins of a city and a profoundly human story.” In his acceptance speech, which was given by journalist and writer Sayed Mahmoud on his behalf, Khalifa expressed his appreciation of the award, which has been presented by AUC Press for the past 18 years on December 11, the day Mahfouz was born. “I never imagined that I would one day be here, with the medal of the master Naguib Mahfouz, as all Arab authors have carried his inheritance that he left to us,” he said. “Naguib Mahfouz, who taught me the meaning of perseverance, the meaning of the power and agony of writing, as he taught generations before me, and whoever comes after our generation will discover many secrets they will learn from his works.” Abdel Nasser noted the way Khalifa’s novel carries Mahfouz’s literary legacy. “No Knives in the Kitchens of this City reworks Naguib Mahfouz’s old Cairo through its focus on the city of Aleppo — its squares, mosques, fields, and labyrinthine streets,” Abdel Nasser said. “It evokes a context in which fiction is disabled by the horrors it recounts, though it has a purpose to explore death. In a broad, dense novel in the tradition of Mahfouz, Khalifa explores the tragedy of modern Syria and breaks taboos to cut through the layers of silence.” Hussein Hammouda, associate professor in the Department of Arab and Islamic Civilizations and another member of the award committee, also acknowledged the way Khalifa’s novel deftly explores the modern history of Syria. “This is a great novel about the subjugation of the body and the spirit,” Hammouda said. “In its world are features of a large scene: of a family with its different characters, the city of Aleppo with its heart and borders, the shrinking lettuce fields, the atmosphere of a communal nightmare at a particular historical moment, pursuit, buried desires and the longing for distant cities that can only be visited in exceptional times. There are different denunciations of the hegemony of one party, almost all-powerful, in a particular historical moment and what threatens this hegemony in another moment. The novel moves between several points in this vast network through the family with its characters and the characters that come into contact with it.” In his acceptance speech, Khalifa expressed the difficulty of writing his novel while Syrians were experiencing the atrocities of war. “For once, writing stands before itself to answer a critical question about what writing can do when death becomes so abominable," he said. "For once, I ask in shock about the purpose of writing, and confess that my illusions ended when I discovered that we are so weak, unable to help a child refugee in the camps and return him to the warmth of his house, or the body of a man shot by a sniper for passing wrongly in the wrong place at that wrong time, but, at the same time, it has removed from my eyes a haze I dared not confess before.” Khalifa was born in Aleppo in 1964. He graduated from the University of Aleppo law school in 1988, and became a founding editor of the literary magazine Alif two years later. He has written numerous scripts for TV dramas and films, several of which have won awards, and he presented and produced the television series, Portraits, on Arab writers. He is the author of four novels, including Haris al-khadi‘a (Guard of Deception, 1993), Dafatir al-qurbat (The Gypsy’s Notebooks, 2000), and Madih al-karahiya (In Praise of Hatred, 2006), which was shortlisted for the International Prize for Arabic Fiction and was published in English in 2012; it has also been translated into Spanish, French, Dutch, Italian, Norwegian, and Danish. Since 1996, AUC Press has presented the annual Naguib Mahfouz Medal for Literature, a major award in support of contemporary Arabic literature in translation. The award consists of a silver medal and a cash prize, as well as translation and publication throughout the English-speaking world.