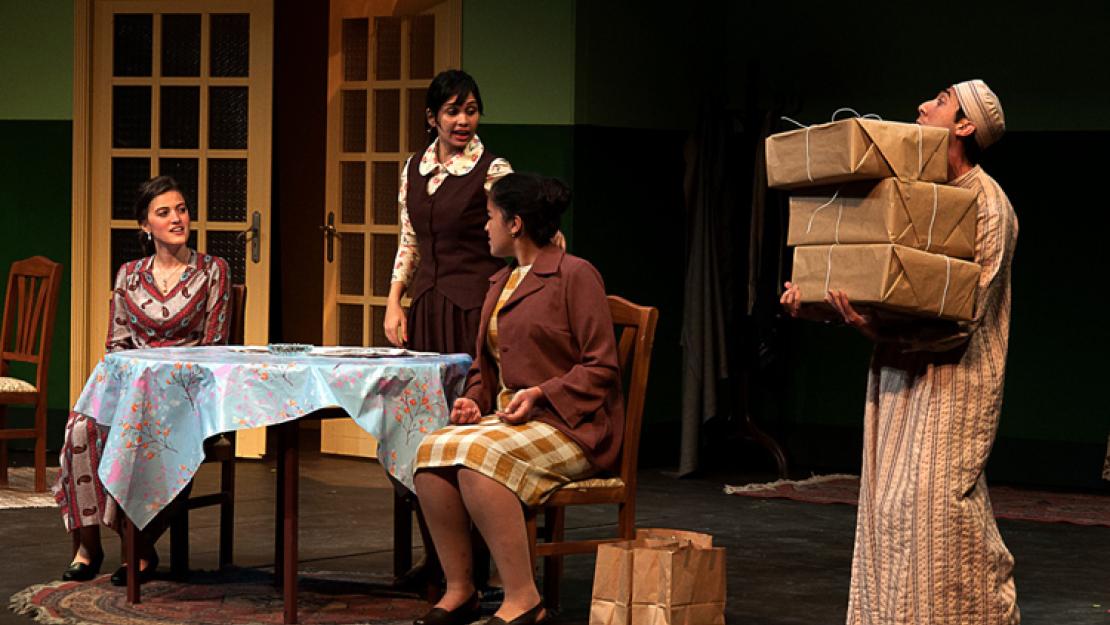 Using satire to illustrate the major issues and difficulties multiple characters from varying social classes face as they attempt to navigate their way in a period of fast-paced societal changes, El-Nas Elli Fuq (The People Upstairs) Arabic play is being shown April 6 - 8 at the Malak Gabr Arts Theater in AUC New Cairo. The play was written by Egyptian poet and playwright Noaman Ashour in the 1950s and is directed by Mahmoud El Lozy, professor in the Department of the Arts and director of the theatre program at AUC. Ashour also wrote El-Nas Elli Taht (The People Downstairs), which was performed by AUC students in 2012 -- also directed by El Lozy -- and examines societal and classist tensions following the 1952 revolution. “Both plays show how Egyptians lived in the mid and late 1950s after the revolution that took place in 1952," explained Ali Shaltout, the student playing the role of El Basha in this year's play. "El-Nas Elli Fuq shows the life of a high-class family, while El-Nas Elli Taht revolves around low-class people renting rooms in a basement to live in.” El Lozy added, “In El-Nas Elli Fuq, the old ruling class is seen waging a battle to hold on to its social and financial privileges through various tactics. Most of these tactics involve the imposition of their will on the desires and aspirations of the young who desperately seek to liberate themselves from the domination of their elders.” True to the nature of Ashour’s previous works, the play relies heavily on the sense of “organized chaos” to move the plot forward. “It’s what attracted me most to the storyline,” said Yacoub El Masry, the student playing the role of Hassan. The issues of class tension and the muted chaos that permeated Egyptian society following the 1952 revolution also run in parallel to many similar issues that Egyptian people are facing today. "I believe that this play has a very visible cultural significance,” observed Amira Sherif, the play's stage manager. “It shows the struggle between people clinging to the past and people who are looking to the future, and I think this is very similar to the situation we are in right now, since Egypt is in a transitional stage after the Arab Spring and the revolution. There are classes struggles, especially among the upper class, and people are trying to fit into the new conditions. This is exactly what is addressed in the play." In addition to the rousing social commentary, El Lozy explained that the play also benefits the student actors "by offering them numerous possibilities to learn together in a spirit of creative collaboration.” Performances will be held at the Malak Gabr Arts Theater on April 6, and 7 at 6 pm. Additional performances will be held at 5 pm on April 5 and 8. Tickets are on sale at the Theatre Box Office for LE 20. Box office hours are from 1 to 6 pm daily, except on weekend.