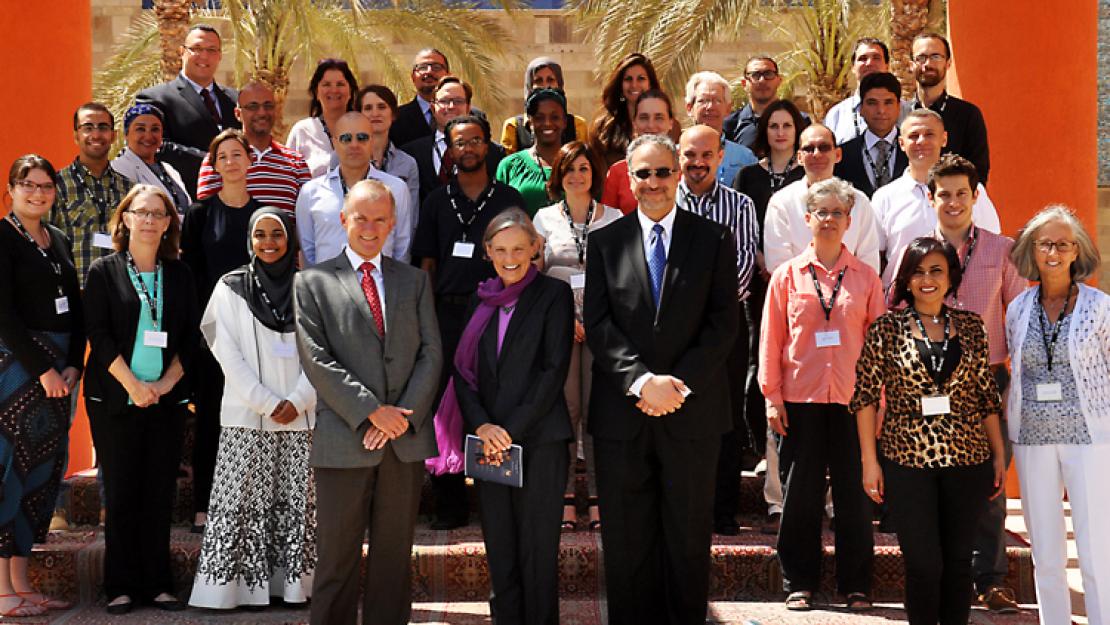 Traveling from locales all over the world, the 2014 - 2015 new faculty members come from diverse backgrounds, yet are tied by their love of teaching through interdisciplinary learning.

For Nermeen Shehata, visiting assistant professor in the Department of Accounting who received her PhD from Aston University, the most important aspect of teaching accounting is engaging students. She hopes to challenge common misconceptions about accounting through collaborative work with other students. “One of the major myths about accounting is that it’s only related to math, which many students feel is not useful in day-to-day life,” she said.

To break this stereotype, Shehata starts by discussing major accounting myths with students in the first class session. Shehata uses methods that combine visual learning tasks with accounting methods that students are familiar with. At the end of each semester, she provides students “with cases that have problems similar to what they have seen in class, in addition to other things that are unusual for them.” In doing so, she aims to challenge students to use problems that they have seen before in new contexts. “I tell them to think outside of the box,” she said.

Mia Jankowizc, associate professor of practice in the Department of the Arts who received her master’s from Goldsmiths College and who teaches Introduction to Visual Cultures, also emphasized the interdisciplinary nature of her field, which allows art students working with different media to diversify the concepts behind their work. “Visual cultures covers film, graphic design and art, so we have electives and special topics, and you can mix and match between them all,” she said.

Jankowicz’s personal work follows the same thread of multimedia art. She is currently in the process of curating an audio guide to the Egyptian Museum, which she described as an “independent project to re-enliven the activities in the museum.”

“This museum is so fantastic, but is also quite moribund in its curatorial presentation, and it has suffered a great deal for many reasons,” she explained.

To fulfill her goal, Jankowicz is commissioning writers, musicians, artists and thinkers to make short audio pieces that can be taken into the museum. Combining her love and attachment to Egypt with her background in art, Jankowicz hopes “that the aural becomes a gateway to reopening” the historic spaces within the Egyptian Museum.

In addition to academics, the new faculty members also emphasized the importance of symbiotic teacher-student relationships. “Teaching is the only profession that is a two way interaction,” said Shehata, adding that this interaction is what drew her from accounting to teaching.

“If you are an accountant, you mainly deal with paper and statements and so on. But when you teach, your role is not only a teacher; you act as a role model to students. You befriend them,” she said.

Stephen Nimis, professor and interim chair of the Department of English and Comparative Literature who taught Classics at Miami University of Ohio for 30 years and received his PhD in comparative literature from the University of Minnesota, echoed the same sentiments. His passion for teaching stems from the role he takes on as a mentor to students. “What I like most about teaching is helping young people figure out what it is that they want to do with their lives, what kind of lives they want to have and what kind of people they want to be,” he said. “University students are looking for ways to figure out what’s really important to them in life. I like to help people do that.”

Jankowicz described her enthusiasm for mentorship and teaching as similar to the fervor with which many people share their favorite music. “I think that curating has this similar urge to teaching, which is to take this really cool thing that you want to show people and you want them to learn everything about it,” she said. “You want it to become theirs, and you want them to take it away and think about it and do something else with it. Curating and teaching are based on that.”