The Ins and Outs of the AUC Bus Service 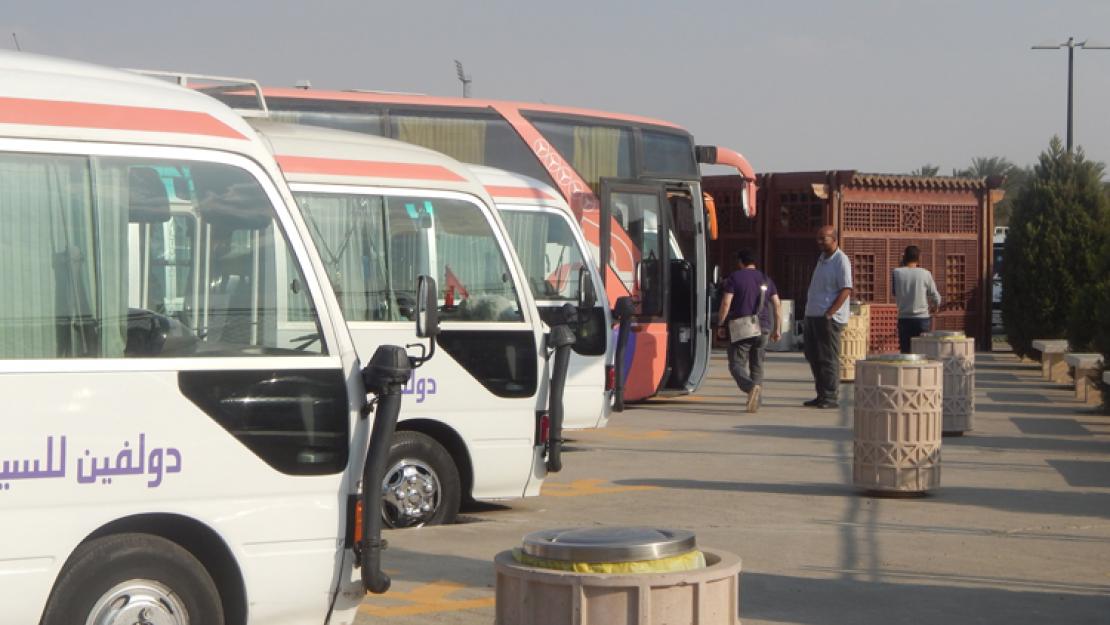 One of the main challenges facing AUC bus service providers is anticipating the fluctuating demand, according to Mina Gamil, planning and development manager, who spoke at the bus discussion event held yesterday.

“Demand is fluctuating and is varied across time slots and routes, so we can’t anticipate it,” he said. “There isn’t a normalized figure for it, but we are doing our best to meet people’s needs.”

The bus discussion was held to familiarize students, faculty and staff with the decision process for selecting AUC’s current bus service providers. In the past, Family Transport was the single bus service provider, causing a limitation in the quality and efficiency of the service. “Family Transport monopolized the AUC bus service until 2011,” said Gamil. “Even when we introduced new providers for one route, Family Transport had the majority of shares, and this was not favorable for AUC. The decision among the bus task force was that the service be almost equally divided across multiple vendors. There was also dissatisfaction with Family Transport’s performance based on the community feedback and regular inspections, so we had to change it, particularly that their contract was coming to an end.”

The major constraints in selecting other service providers were the University’s budget deficit; an increase in bus service fees, coupled with a desire to keep prices reasonable for AUC community members; as well as traffic laws. Following a two-phase bidding process, several bus service providers were shortlisted. Only four were able to meet the financial, legal and operational needs of AUC. These are Dolphin, Seddik, Escapade and Masrya.

The major constraint, explained Gamil, was that “AUC couldn’t afford new buses because this would cost almost double the current allocated budget, so we had to resort to used buses,” he noted. “There were also a few bus service providers in the market who complied with AUC’s technical, operational, financial and legal selection criteria. In addition, Egypt’s traffic laws stipulate that institutions like AUC cannot use buses that have a tourism plate, so we were confined to private buses only, which limited our choices tremendously. We had to come up with a new model to meet our needs.”

The new model, as Gamil put it, is composed of two major intertwined aspects: 1) optimizing the previous operational scheme in terms of routes, time slots and points through a Bus Service Advisory Task Force, which included representatives from all the AUC community clusters and 2) the need to resort to used buses. None of the above aspects alone could have fit within the bounding constraints, Gamil noted.

From an operational perspective, AUC bus service providers operated with acceptable effectiveness, according to Gamil. “Our aim is to have none of the buses breaking down during the ride; we recognize that this is a problem and we are continuously working to fix it,” he said. “AUC-owned buses, which normally serve dorm and faculty housing residents, are also available to serve as backups until providers refine and tune their performance.”

With regard to cleanliness, Gamil urged AUC community members to report to bus attendants at the terminal if they find a bus unclean. In response to a question about unclean bathrooms on some buses, Sherif Maged, senior director of housing and transportation, explained that buses with bathrooms were first put in place based on the demand of 6th of October riders. “They ended up being a disaster, so we are asking vendors to keep bathrooms closed during the ride. We are working on fixing this issue,” he said.

Other issues the University is working to solve include broken seats in some buses, tardiness and driver behavior. "If a driver drives recklessly, the company is first warned, and if the behavior is repeated, the driver is expelled,” noted Gamil, adding that 60 percent of the buses now have Wi-Fi; a special logo is being developed to make AUC buses easily identifiable to students, faculty and staff; and low-demand bus trips on certain routes have been eliminated to make the process more efficient and resourceful.

“We recognize that there are problems during this transitional period,” said Gamil. “It will take time and the collaboration of all stakeholders, including bus riders, in order to improve the service. It is a learning process that we all need to be engaged in to rectify these issues.”