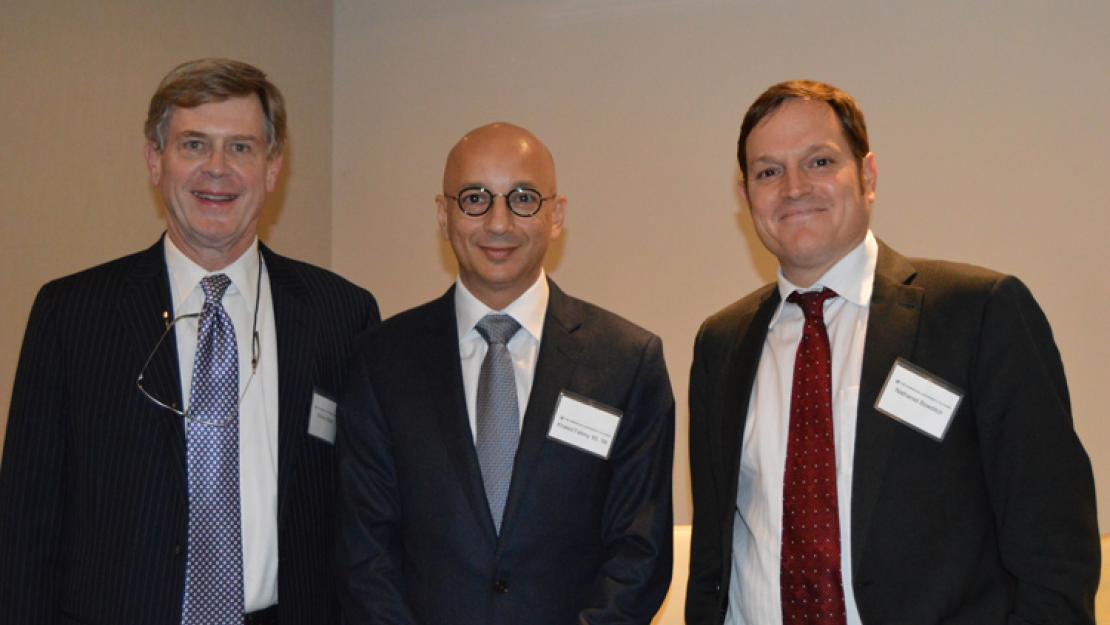 “Every year, on the first day of my philosophy class, I ask, ‘Who would be here if they weren’t required to be?’,” said Nathaniel Bowditch, dean of the School of Humanities and Social Sciences. “Maybe one or two students raise their hands, but that’s it. But every year, I hear at the end of the course from students how this class and broad learning style benefits them.”

Bowditch’s remarks were part of a meet-and-greet and discussion with New-York based alumni on higher education in Egypt. In addition to Bowditch, the discussion featured Richard Bartlett, president of AUC’s Board of Trustees, and Khaled Fahmy, ’85 ’88, professor of history and Carnegie Centennial Fellow. The event was the latest of what the revived New York Alumni chapter hopes will become frequent gatherings of alumni living in New York City.

For Fahmy, many of the issues surrounding higher education “come down to a series of false choices,” and those who debate whether education should be free, and if Egypt really needs so many university graduates, are missing the point. “Students should not need to choose between a free education and a quality education,” he said.

To change higher education in Egypt, Fahmy argued, there must first be a real national dialogue on the state of higher education, not just amongst academics, but politicians as well. “Egypt has a huge population and a strong history of university life,” he said. “[There] should be a national political debate [on the] question of, ‘Why do we value universities, and what can be done to improve them?’”

Secondly, the issue of budgeting in universities must be raised. “If the point of a university is to educate and create new knowledge, there must be research,” said Fahmy, adding that 0.2 percent of the Egyptian budget goes to all research in the country, not just that conducted at universities. Of this, currently 90 percent goes to salaries. While the new constitution stipulates that this amount must be raised to 1 percent of the annual budget, for this to have any impact, “there must be a change in this breakdown,” Fahmy explained. Focusing on AUC, Fahmy noted that what differentiates the University is not how many ministers or officials it produces, but its commitment to a broader education. “What makes good engineers is not how specialized they are, but what they know outside of their specialization,” he said. “Knowing about cinema, architecture and the arts –– This makes a better engineer in the end, and this is what distinguishes those educated at AUC. “

Echoing the same sentiment, Bowditch emphasized the importance of adaptive skills AUC students graduate with. “What makes you a better engineer are the transferable skills,” he affirmed. “You have to write and think well, and those skills undergird the specialization of the market.”

AUC student Kareem Mostafa, who is now studying abroad at the State University of New York, agreed with Fahmy and Bowditch’s assessment of the importance of liberal arts, but wondered why students were not free to major in whatever they wanted without the policy of GPA cutoffs for majors. Through this policy, he argued, the University is reinforcing a system under which many students end up majoring in what they can get into. “In students’ early years, they are so preoccupied with achieving the right GPA that they don’t take advantage of harder classes or new topics,” said Mostafa.

Bowditch noted that the policy on GPA cutoff scores for declaration of majors has been changed, and he and Fahmy agreed there was ample opportunity for AUC to begin the soul-searching about higher education on its own campus and that the discussion would be ongoing. “We need to acknowledge that teaching is not something that can always be quantified with achievable outcomes,” said Bowditch. “We can’t set the goal before we begin the process.”

Bartlett, who introduced the discussion, told attendees that during the recent board meeting in Cairo, he was “struck by how successfully AUC had continued to integrate itself into the role of Egyptian society.” While the last few years have been difficult for the University, he said, “one of AUC’s hallmarks has been its international character, bringing scholars and students to Egypt and serving as a source of cross-cultural understanding and inspiration. Collaborative research, student exchange and an international faculty have all contributed to a cosmopolitan influence within Egypt.”

He added, “AUC will be making a more concerted effort to showcase the intellectual life at the University, and to strengthen the international network of the AUC family. AUC has a tradition of acting as a window into Egypt and as a bridge between Egyptian society and other regions of the world."