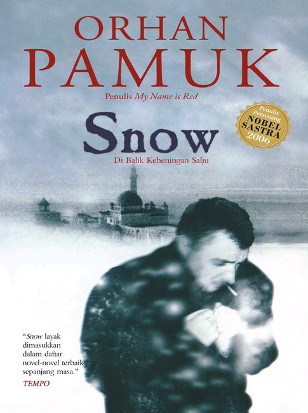 In 2006, the Nobel Prize in Literature was awarded to Turkish writer, Orhan Pamuk.  In their press release, the Swedish Academy proclaimed that Orhan Pamuk "who in the quest for the melancholic soul of his native city has discovered new symbols for the clash and interlacing of cultures (Nobel)". The explicit use of the word “clash” appears to suggest ‘the clash of civilizations’ phrasing that is prolifically used in many writings about foreign policy involving the United States and other nations. The ‘clash’ phrase is later coupled with the word “interlacings,” which may attempt to convey political correctness on the part of the Academy.

Writing often involves taking great risks and Pamuk is no stranger to risk taking.  Pamuk’s compendium of works includes his bestselling novels Snow, My Name is Red, and Istanbul, A Memoir. In what some have referred to as a reversal of art imitating life, the prescience of Pamuk’s work was viewed by the Turkish government as an insult to national identity.  In an interview with the Swiss newspaper, Tages Anzeiger, Pamuk said, "Thirty-thousand Kurds and a million Armenians were killed in these lands, and nobody but me dares to talk about it." His remarks came at a time when Turkey was actively seeking membership in the European Union. Pamuk was later acquitted when an Istanbul court ruled “heavy criticism conveyed within the scope of freedom of expression" was not a crime.

Pamuk’s writing represents an intricate weaving of humanism and as the narrator, he provides readers with views about his country’s history, culture, and social characteristics. Snow’s concurrent narrative of many characters and the (snow) plays a pivotal and structural role in the novel’s unfolding.  Pamuk and the characters he creates, engage in a direct-audience address.  This literary device allows Pamuk to take an active relationship with his readers, while also challenging them to enter this fictional space to imagine a reality that may never achieve full representation.  What is also most revealing about Snow is Pamuk’s ability to represent Turkey in ways that reminds the readers how literature is a manifestation of reality and begs us to take “storytelling” seriously.