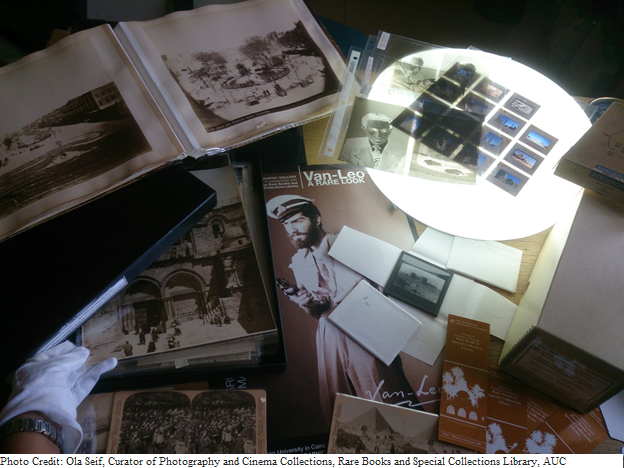 While photography is, universally and artistically, considered an expression of the photographer’s personality and perspective, in education, it’s an effective teaching tool. At AUC’s Rare Books and Special Collections Library (RBSCL), the photo collections were, for decades, almost only enjoyed by Islamic Art and Architecture scholars who benefited from Professor Creswell’s visual collection. With the move to the New Campus, almost a decade ago, the RBSCL got located on campus rather than it being a stand-alone villa in Bab Al-Luq. And despite our nostalgia for the charm of the RBSCL villa’s history, the move brought students and faculty’s attention to the potential of using the photographs and cinema collections for classroom and educational purposes.

This encounter, of course, was neither a coincidence nor a spontaneous consequence of the move. It actually required a curatorial approach to "market" the photograph collections, let faculty members know about their existence, and suggest ideas for potential collaboration between them and the RBSCL. Expectedly, several faculty members were quick to seize the opportunity and, before we realized it, meetings were set to explore which specific collection would be appropriate for which course. Accordingly, different ways whereby the photos could be integrated into the respective syllabi to enhance the students’ research and analytical skills in line with the chosen themes and learning outcomes of the classes being taught were decided on. The most successful collaborations during the past eight years were with the HUSS, Comparative Literature, History, and PVA departments, including the design, graphic arts, and photography units. I would be remiss, however, if I did not mention those between the RBSCL and the Rhetoric and Composition department since they are almost done on a yearly basis.

Typically, preparatory meetings would start at least a few weeks before the semester began. Knowing the title of the course and syllabus he or she will be teaching ahead of time, the faculty member shares them with me, and we spend a few sessions exploring together which particular collection would best fit the scope of this course and what supplementary material should be prepared for it. Interestingly, it is while we are narrowing down the selection that ideas for future projects come up. Then, we synchronize our schedules, bearing in mind that the tentative dates of the assignments will typically require multiple student visits and private library guidance to identify the photos that they need for the assignment/project. Finally, both the faculty member and I agree on the format, methodology, and tentative date for a final output, which could be anything from an oral presentation, an in-house exhibition at the foyer of the library, an article in an appropriate campus publication, or a short film.

The next step is to arrange for one or more tailored class visit(s) to the RBSCL.  During those visits, the students are introduced to a pre-selected photo collection, its scope, and the original collector or originator before it ended up at the RBSCL in order for them to better understand the context of the collection and its raison d’etre. In order to enhance the research skills of the students, subsequent class assignments are intentionally designed to have the students bounce back to the library to research and dig up relevant material that may support their argument. Depending on the class and the nature of the topic, there were times when it was mutually decided by the teaching faculty and the curator to have the students work in teams of three or more rather than work individually. Obviously, the collaboration among the team members is part of the grade they receive, but a recommendation/evaluation from the curator who has been observing their interaction and library research process is taken into consideration as well.

Perhaps the one faculty member who has, to date, scored the highest number of collaborations is Doris Jones whose interest in teaching her students archival literacy skills is best fulfilled by unearthing subjects, material, and photographic collections from the shelves of our archives, a process she often refers to as “feeling like a kid in a candy store”. The topic of our first joint teaching project in 2004 was the self-portraits of Armenian photographer Van-Leo (1921-2002) who produced an array of four hundred black-and-white portraits of himself in disguise. After the introductory classes, the students were assigned selected readings from Susan Sontag's books on the photography theory. Then, the portraits were used in a question-and-answer session to investigate the truth about Van-Leo’s nationality—whether he was a naturalized Armenian living in Egypt or an uprooted immigrant whose different personas emanated from his profound identity confusion. In subsequent semesters, the focus was on Railways in Egypt on which the RBSCL houses an album of photographs.

In another course based on the postcards collection, the selection of caricature postcards was followed by an exhibition at the foyer of the library, and a custom-made software was developed by UACT to enable the students to trace the trajectory and context of particular postcards and investigate the texts on the backs of those postcards. We were inspired by the idea of epistolary writings, which was the topic of yet another course. Interestingly, the epistolary letters brought us back to Van-Leo who, in the 1940s, had much correspondence with female officers from South Africa, New Zealand, and other countries. Obviously, they were all affectionate lovers and admirers of the handsome young man that he was then, as the letters reveal.  The students were shown several photos of South African female officers and a 30x40 black-and-white portrait of Ivy that were all taken by Van-Leo and asked to envision the stories behind them. It was so refreshing to see the students so engaged in the process and watch them write many scenarios with happy and sad endings. That was one time they were so involved that we almost thought they were about to take a trip to South Africa to see for themselves what really happened.

Every class is different in terms of theme, requirements, and student needs and interests, but the objective is always the same: to guide the students to effectively use the available visual material at the RBSCL as evidence that needs to be examined, validated, and/or contested. Whereas the grades the students receive at the end of the course might reflect the success of the collaboration, the real success is when a student walks into my office a few semesters later and asks me for photos that could help him or her for the papers they are writing for other courses. An even bigger reward for me is when some alumni who previously visited the visual photograph and cinema collections or used it as students   bounce back to the RBSCL seeking visual material which they intend to use for their business projects.