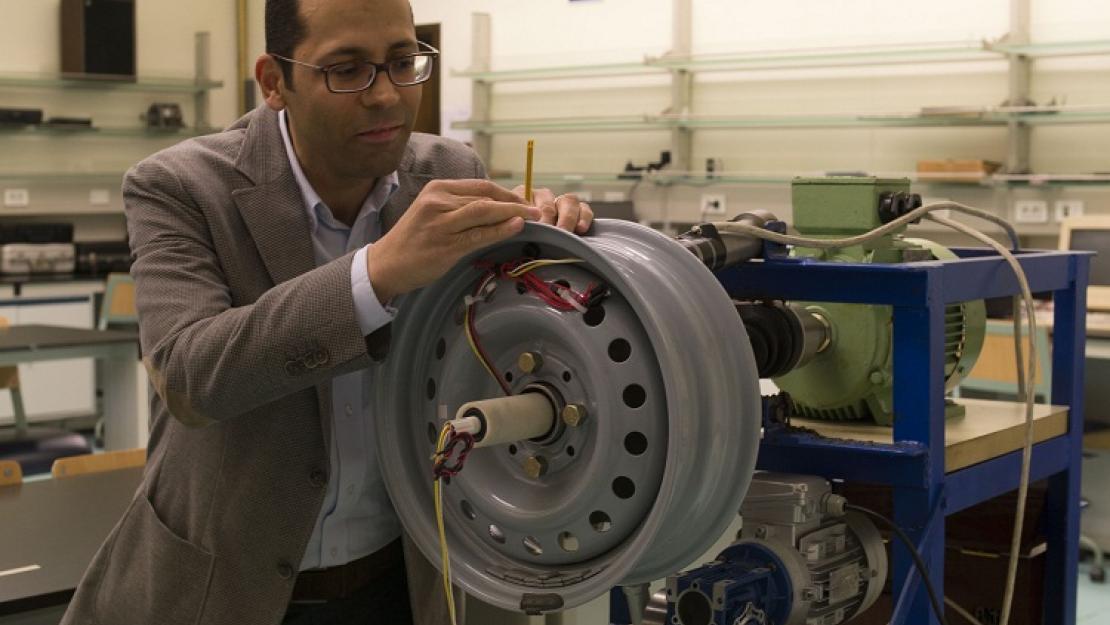 “At present, tire pressure monitoring devices are almost exclusively powered by batteries, but batteries have a limited lifespan and require periodic replacement,” explained Mustafa Arafa, professor and graduate program director in the Department of Mechanical Engineering. “For sensors operating in harsh or inaccessible areas, the installation and maintenance costs can be prohibitive.”

The aim, Arafa noted, is to harvest energy from automotive tires in order to power up the wireless pressure sensors that are placed inside the tires. “These sensors are responsible for monitoring the air pressure in real time and alerting drivers via their smartphones whenever a tire becomes underinflated or overinflated,” he said.

The project is based on energy harvesting, whereby small amounts of energy are extracted from their environments. In the case of Arafa’s self-powered tire pressure system, the sensors would be powered by the rotations and vibrations of the car’s tires. This means that the sensors will never require battery changes or replacements, making them both economically efficient and low maintenance overall.

“Energy harvesting is very different from renewable energy because it doesn’t deal with megawatts, only milliwatts and mircrowatts, which are incredibly small amounts of energy that are typically wasted,” Arafa explained.

The first phase of the project involved setting up a lab at the University that mimics how tires move, spin and vibrate so that Arafa and the mechanical engineering graduate students working alongside him can begin to conduct tests. Arafa’s team has also partnered with Smartec to help design the tire pressure monitoring system so that it can be marketed after development.

“This is a multidisciplinary project,” he noted, “What we do in the mechanical engineering department is work with the mechanical parts. Smartec, which specializes in wireless sensors and communication, develops this communication link between a person’s smartphone/device and the car. This is how we integrate and collaborate.”

While other companies are working to develop similar tire pressure monitoring systems, the current absence of such a product on the market has given his team a considerable advantage. “There is some room for innovation because there is nothing like it in the market, and we have an additional edge in Egypt because we can actually target the aftermarket since we can install these sensors and mobile applications in older models of cars that don’t have a computer on board,” he elaborated.

The Egyptian market, in particular, is one that could benefit immensely from such a device, he emphasized. “Running an underinflated tire increases fuel consumption, reduces the tire’s lifetime, affects the stability and handling of a car and leads to other tragic consequences,” Arafa observed. “Even with new tires, if it gets punctured and then hits a bump, it can create a bubble in the tire that will blow out with time.  All of these are great safety concerns in a country like Egypt due to the road conditions and generally poor car maintenance.”

He added, “While modern cars come with tire pressure monitoring systems, Egypt still has many cars that are not equipped with these systems. For this reason, we thought that the automotive aftermarket would welcome a tire pressure monitoring system that comes with a mobile application. This way, it can be fitted on any vehicle, even those without onboard computerized systems, so tire pressure and deflation alerts can be displayed on the driver’s smartphone. We hope to have a prototype in the next coming months.”

Photo caption: Arafa tests sensors in his lab at AUC