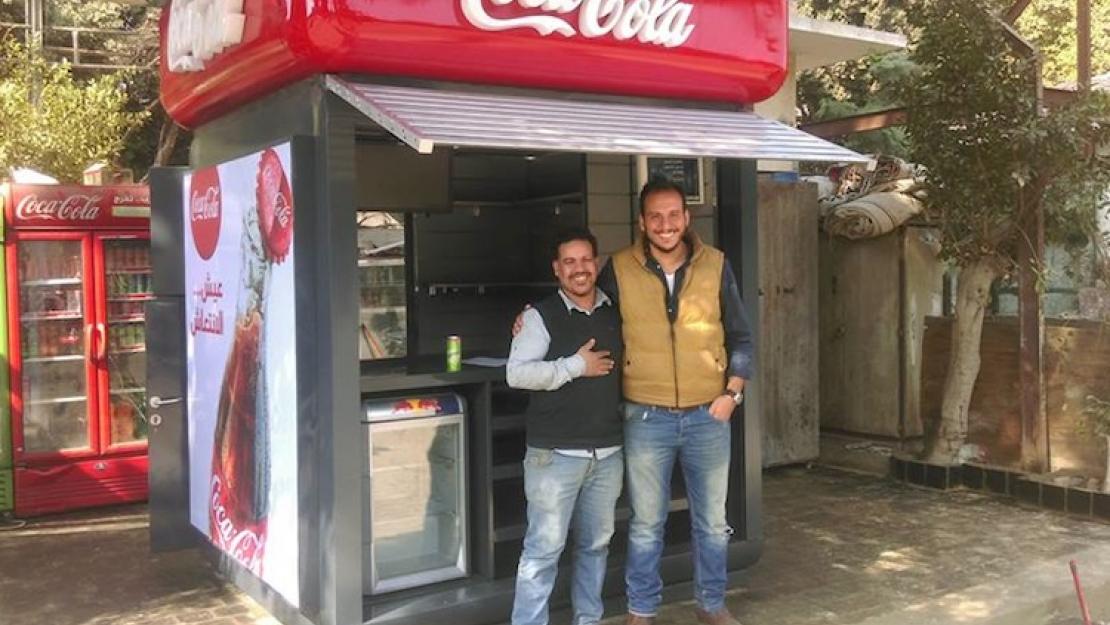 Mahmoud El Shimi, owner of Carnival Victoria kiosk in Maadi, after Tatweer substituted his old kiosk with a new one

The Venture Lab (V-Lab) at AUC's School of Business is hosting Demo Day today, Thursday, March 5, for its third cycle, which is coming to a close. While Demo Day is an opportunity for the entrepreneurs to showcase how they have developed their startups at AUC and pitch their business ideas to potential investors, the question arises: What happens after Demo Day?

The success stories of two startups from previous cycles –– Tatweer and Madad –– demonstrate how the AUC Venture Lab helps young entrepreneurs bring their ideas to life.

We see kiosks as an ordinary part of the urban landscape; every block has one. At Tatweer, a socially conscious startup from the V-Lab's second cycle, the young marketeers saw the city's kiosks as an underdeveloped marketing opportunity and a chance to grow local entrepreneurship. All these kiosks needed was a facelift.

In project Kiosk Uplift, Tatweer sought to design a kiosk that was aesthetically appealing, while at the same time maximizing space for branding and sponsorship. All this adds up to a significant increase in profits for the owner, and a nicer view for the rest of us.

Armed with an innovative business plan, Tatweer was ready to build on the resources available to it at the AUC V-Lab. Tayssir Ibrahim, vice president of sales and marketing at Tatweer, highlighted access to AUC faculty members and students, opportunities to meet investors, mentorship and financial support in the prototype phase as value-added opportunities. Tatweer also benefited from one of the most valuable tools for a startup –– visibility.

"The AUC Venture Lab gave Tatweer access to several domestic and international media players," noted Ibrahim, adding that interest in the company has grown rapidly, and project Kiosk Uplift has been featured in several publications.

Now the company is finally seeing the fruits of its labor on the ground. "Our first kiosk is in a very prime location in Maadi," said Ibrahim. "The kiosk supplier is ready to deliver the remaining four kiosks from our first job order, and we have a decent lineup of old kiosks in Maadi ready to be replaced." The company has also signed agreements with major sponsors like Red Bull, Coca Cola and British American Tobacco.

Looking ahead, Ibrahim envisions Tatweer rolling out its project in other key areas, namely Heliopolis, Nasr City, Nozha, Downtown, Kasr El Nil, Garden City, Manial and Shobra. “We are thinking large-scale and long-term, and our aim is to launch 500 new improved kiosks in the next five years," Ibrahim asserted.

Even after Demo Day, the V-Lab continues to collaborate with the startups as the businesses grow. "We always try and keep an active relationship with our alums," said Sherif Shabana, manager of the Venture Lab, "They often return to the V-Lab to mentor new startups in similar industries and share their experiences." Former participants also have continued access to the V-Lab's extensive network of investors. Shabana added, "Once incubation is over and our alums are ready to fundraise, we set them up with investors specific to the round and size of investment they are looking for."

Madad, on the other hand, is a crowd-funding platform from the AUC Venture Lab's second cycle. To date, the startup has raised LE 130,000 for NGO projects in Egypt. It entered the V-Lab at the early stages with a pilot project and a strong idea –– reform the traditional approach of short-term charitable giving.

The founders of Madad were building a website where users could donate exclusively to sustainable NGO projects, track the progress of the project through pictures and videos, and see firsthand the impact of their contributions. Furthermore, the company makes a point to focus on NGO projects that provide a long-term means of empowering citizens in impoverished communities.

With the support of the AUC V-Lab, the founders were able to take Madad to the next level. "Joining the V-Lab added a lot to the development of our company, starting with the training sessions that helped us strengthen our knowledge in the marketing and financial aspect of a business," said Hazem Hassan, executive manager of Madad.

Hassan also noted how valuable it was to interact with business experts and get feedback on their startup. Now, he affirmed, "since we joined the AUC V-lab, Madad has grown from being an idea with a prototype portal to a fully functioning crowd-funding platform with three projects hosted." The company has successfully begun fundraising for the three projects, and is in the process of documenting their implementation and progress to share with donors.

One such effort is the Tanweer El Heiz Project, focused on a small village of 3,300 people, located south of the Baharia Oasis. Currently, El Heiz has no consistent electrical power source, and the residents can't refrigerate food or simply turn on a light at night. The project will provide residents with solar energy installations that will give them access to electricity 24 hours a day. Madad entrepreneurs just reached the fundraising goal of their first phase and will be installing solar panels and household appliances in five homes.

The entrepreneurs at Madad are eager to expand their scope, "Our target this year is to increase the number of projects hosted at the platform, reaching 10 projects, add new donation services and raise the first round of investment," Hassan explained.
Currently, the startup is operating in greater Cairo, but Madad is looking to spread the operation throughout Egypt and, eventually, into the rest of the Middle East.

“We are very interested in supporting economic development, economic growth, competitiveness and job growth,” said Ayman Ismail, founder of the AUC Venture Lab, assistant professor in the School of Business and the Abdul Latif Jameel Endowed Chair of Entrepreneurship. “All of these things come from entrepreneurship and starting new companies that contribute to that economy. One of the best ways of doing that is trying to accelerate the cycle of transforming innovation into new startups."

Photo caption: Mahmoud El Shimi, owner of Carnival Victoria kiosk in Maadi, after Tatweer substituted his old kiosk with a new on