In Memory of John Rodenbeck, Professor Emeritus of English and Comparative Literature 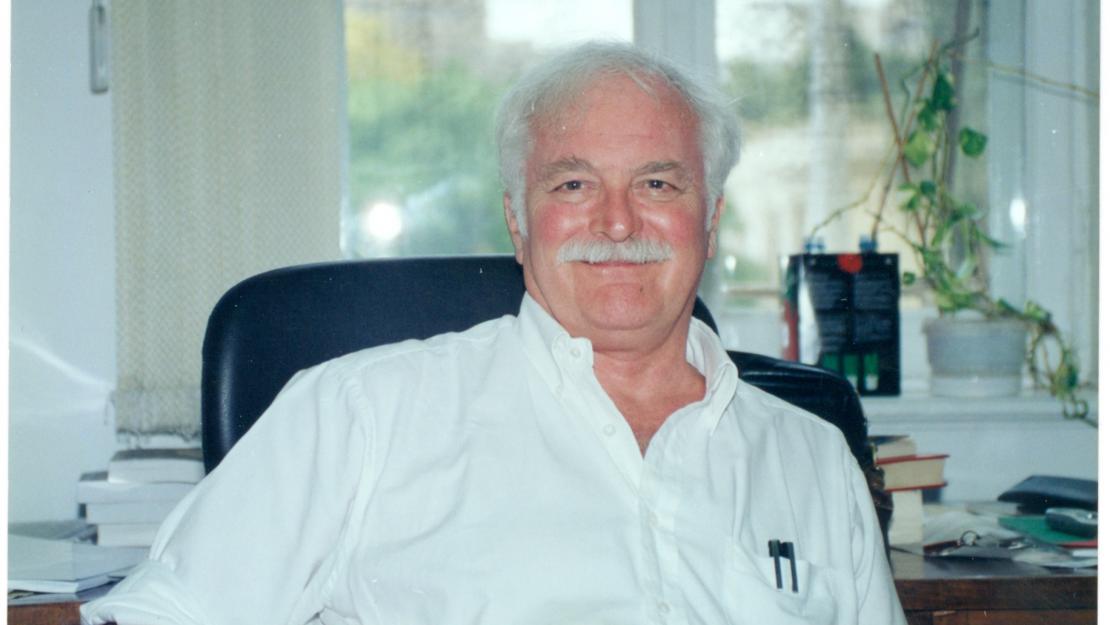 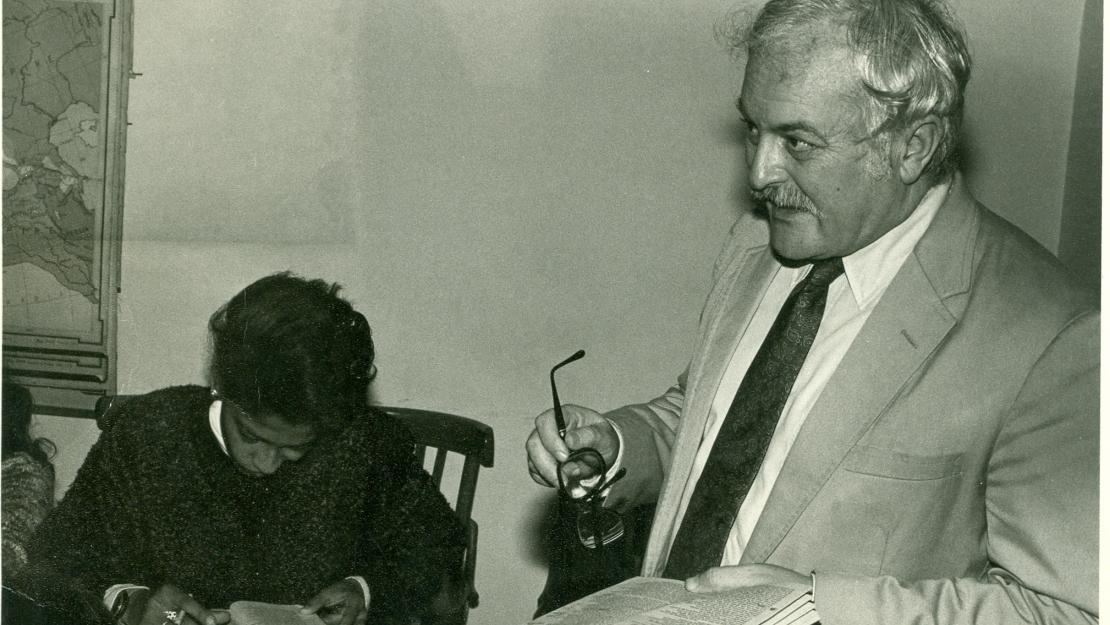 John Rodenbeck, professor emeritus of English and comparative literature, passed away recently at his home in France.

Rodenbeck joined AUC in 1964. "When I arrived in Egypt in 1964, I found that what I'd seen in films was in some abstract degree more or less true, but that in fact the reality was 10 times as exciting," reflected Rodenbeck in "The Road Taken" (Interview) published in Alif: Journal of Comparative Poetics in 2006. "I was enormously gratified. What first brought me to Egypt, though, was what killed the cat: sheer curiosity."

Rodenbeck continued teaching at AUC for more than three decades. In a 1990 interview with the Caravan student newspaper, he likened teaching to acting, which is one of his passions, saying: [Teaching[ is the idea of giving performance that is appealing."

Rodenbeck's son, Max, who serves as the South Asia bureau chief at The Economist in New Delhi, reflected on his father as a professor of English and comparative literature: "As a professor, his interests ranged from English Romantics to Greek and Latin classics to European travel literature, particularly in the Middle East. During the 1960s and 1970s, he was also very active in the AUC theatre, often playing a leading role."

In a 2006 oral history interview with the Rare Books and Special Collections Library, Rodenbeck described English and comparative literature students at AUC as "extremely interested" and "highly motivated."

In addition to teaching, Rodenbeck served as director of AUC Press from 1974 to 1983. Reflecting on that time, he noted in his oral history interview: "... What I had to do was to set up a policy that I thought would be suitable for a press here. And that is, first of all, that we should concentrate on Egypt and the Middle East, particularly Egypt, of course, but the Middle East next — which meant that we did not attempt to produce items in English literature, for example, or having to do with Western society. And the other thing I did was to try to get into something that ... had ... commercial possibilities. The 'Practical Guide to Cairo,' for instance, was was my invention. ... It's done quite well, gone through several editions. And that was the first sort of outreach in the direction of being commercial."

Rodenbeck also started the tradition of publishing translations at AUC Press. "The program of publishing translations had been started by John Rodenbeck back in the '70s," said Neil Hewison, formerly on the AUC Press editorial staff in an oral history interview with AUC's Rare Books and Special Collections Library. "He had decided it was an important job to do, and I remember looking back in the files one day and finding a letter that John had written, I forget to whom, explaining how important he thought it was to publish translations of Mahfouz especially, because he said, 'One day, this man is going to get the Nobel Prize.' And he said this about 10 years before Mahfouz got the Nobel Prize. So he was very farsighted in that respect."

Echoing the same sentiment, Max Rodenbeck noted, "t was a transformative period for what had been a tiny University printing press to a publishing operation. [John Rodenbeck] won AUC the English-language rights to all of Naguib Mahfouz's works, foreseeing that the novelist would gain much wider recognition. He also jointly translated one of Mahfouz's novels, Miramar."

Islamic architecture was another of Rodenbeck's interests. He founded the Society for the Preservation of the Architectural Resources of Egypt, which aimed to document and protect Cairo's rich architectural heritage. "He loved Egypt, but also loved the French countryside, and that is where he chose to retire," said his son Max.

Rodenbeck is survived by his three children Judith, Max and Christina.

Here's what former colleagues and students had to say about John Rodenbeck:

"John Rodenbeck was a charismatic figure with encyclopedic knowledge, a Renaissance man who captivated students and colleagues with his eloquence and critical insights when he taught for four decades in the Department of English and Comparative Literature at AUC. He impersonated the professor of English literature character in Youssef Chahine’s film, Alexandria…Why? (1979), capturing his very own classroom charm.

As director of AUC Press (1974-1983), he collaborated on translations of 1988 Nobel laureate Naguib Mahfouz and disseminated his novels in the 1970s and after. Rodenbeck wrote extensively on Egypt as a cultural critic, highlighting its literature, history, art, architecture and monuments. He translated Alexandrian poets — Cavafy and Ungaretti — and published extensively on 19th- and 20th-century English literature.

A man for all seasons, Rodenbeck felt at home in the world at large. He was particularly fond of travel. His wanderlust was depicted in his interview “The Road Taken” in Alif: Journal of Comparative Poetics (2006) — a volume published in his honor on the occasion of becoming professor emeritus."

"It is with great distress that I received the news of John Rodenbeck’s death. From the beginning, the moment I read his letter of application and saw the photograph attached, I decided he would be a great addition to the department.

So elegantly did he present himself. I never for a moment regretted the immediate decision [of recruiting Rodenbeck]. He proved to be as brilliant as he was attractive. Time after time, students urged me to persuade him to stay on, as we will never find another to replace him. I was particularly pleased when they added, 'His only problem was that he almost never gives an “A.'"

My concern was that he would not wish to stay distant from the academic world. I needn’t have worried. He not only stayed — he stayed as himself, never lowering his standards and requiring the students to stretch theirs to the utmost. With all that, he was one of the most valued members of our department."

"He ... was a very unassuming person ... a walking encyclopedia. He knew everything: literature, Shakespearean period, the Middle Ages. He was a scholar. ... It was a delight and pleasure to see him, telling you parts, for example, of ... Hamlet or something from Romeo and Juliet or all those things, all those great dramas. ... I enjoyed dealing with him because he was a great mind, a great intellect, a scholar. ... I had several advisers when I was working on my thesis, but he's the one who I really ... wanted to deal with ... personally. I enjoyed his intelligence and his readings, and he guided me to what I should do .... and that I owe to him. It's John Rodenbeck. A great mind, a great intellect."

"He used to not just talk to you about, for instance, a certain author. No, he'd give you the feel of the era and act it out and walk out of the room and come in again with a flourish. ... So he was ... really wonderful.He'd give you a history of the art in those days and the music and this and that."

Photos courtesy of the University Archives