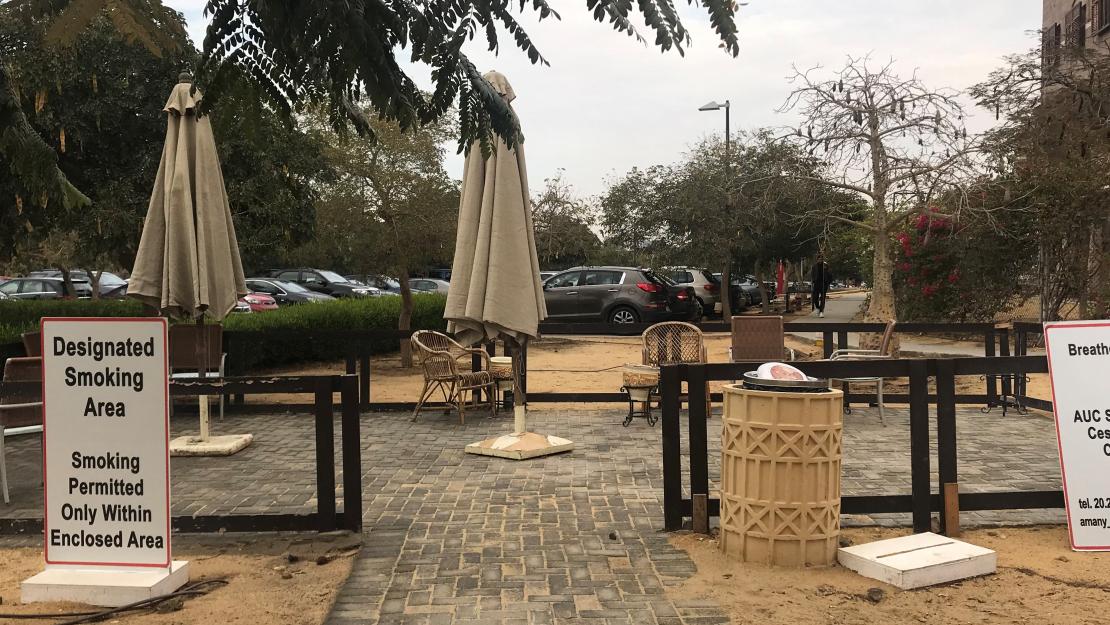 Ninety percent of students, faculty and staff at AUC who participated in the Fall 2019 Tobacco Use Within the AUC Community survey said that they noticed a positive change on campus since the implementation of the Tobacco-Free Community Policy in February 2018, according to Jaime Mendoza, associate professor of practice in the Department of Psychology and director of the Psychological Counseling Services and Training Center.

“People said that they enjoy walking around campus without seeing smoke as though it is coming out of a chimney everywhere,” he said.

A total of 1,613 people — a representative sample of the AUC community — responded to the survey, which the Office of Strategic Management and Institutional Effectiveness sent out last September. Of those who responded, 29% were smokers. Those who reported smoking are students who make up 81% of smokers surveyed.

Mendoza mentioned the importance of conducting these surveys is to obtain community feedback and make necessary adjustments while maintaining with the policy objectives.

“There's a mistaken idea that this policy is just an administrative initiative. In reality, there’s a mix of faculty, staff and students who are supporting this policy,” he said. “Our goal isn’t to stop people from smoking, but to create a cleaner air environment for everyone.”

The survey focused primarily on the effectiveness of the policy, adherence and attitudes toward it, and asked for improvement suggestions. The survey found that most AUCians like the smoke-free air on campus and that the policy is mostly observed. However, most smokers had an issue with the designated smoking areas, sighting their size, appearance and the time constraint when taking a smoke break due to their distance from classes. Additionally, smokers emphasized that the policy “infringes on their rights to a socially acceptable behavior in Egyptian culture.” 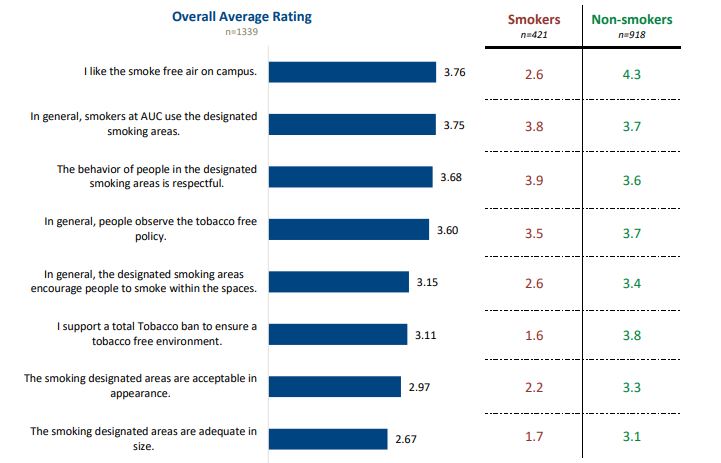 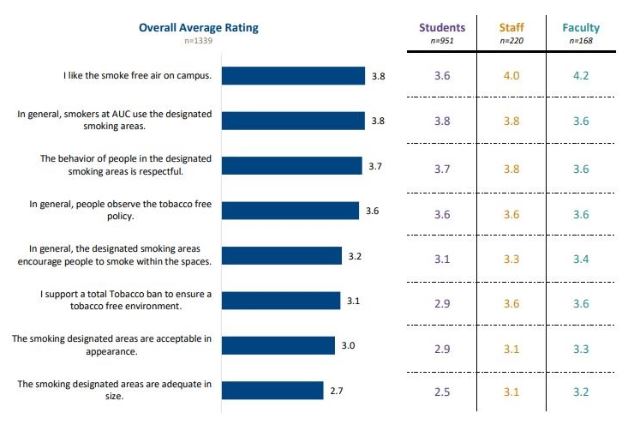 Students make up the majority of smokers surveyed and were found to smoke the most between classes and when feeling stressed.

While the goal of the policy isn’t to stop smoking completely, Mendoza mentioned efforts of awareness of the services provided by the Smoking Cessation Clinic. A little over 50% of the respondents were aware of the clinic, but only 5% of smokers (or former smokers) have used the clinic’s services. Over 80% of these 163 members reported that the clinic didn't help them to fully quit, or only helped them quit temporarily. A handful have noted that the clinic is quite unresponsive and only use medication as a strategy, when they were hoping for more of a support group.

The Tobacco-Free Committee will continue to promote the benefits of not smoking, the potential areas where people can smoke and the benefits of everyone not experiencing second-hand smoking.

“People can expect to see more public service announcements and more awareness about the consequences of violating the policy,” Mendoza said. “We will also be targeting areas where people hide and smoke more heavily.”

The committee is currently working with the Student Union to start improving the designated smoking areas. The area outside of Omar Mohsen is moving to a new location that about three meters further away from where it currently is. The new location is being expanded and made more user-friendly and comfortable. Students have submitted potential designs of the new area to the Student Union, and the committee will decide on one that is of mutual benefit to smokers, non-smokers and the campus.

Egypt's Minister of Higher Education and Scientific Research Khaled Abdel Ghaffar praised AUC's Tobacco-Free Community Policy, stating that he will present it to the Supreme Council of Universities to be implemented in all Egyptian universities starting next year. He added that AUC’s policy will be used as a model for planning and implementation.

Reflecting on the lessons learned while implementing the Tobacco-Free Community Policy, Mendoza said that AUC will be an important consultant to other universities when running into the challenges that come with change.