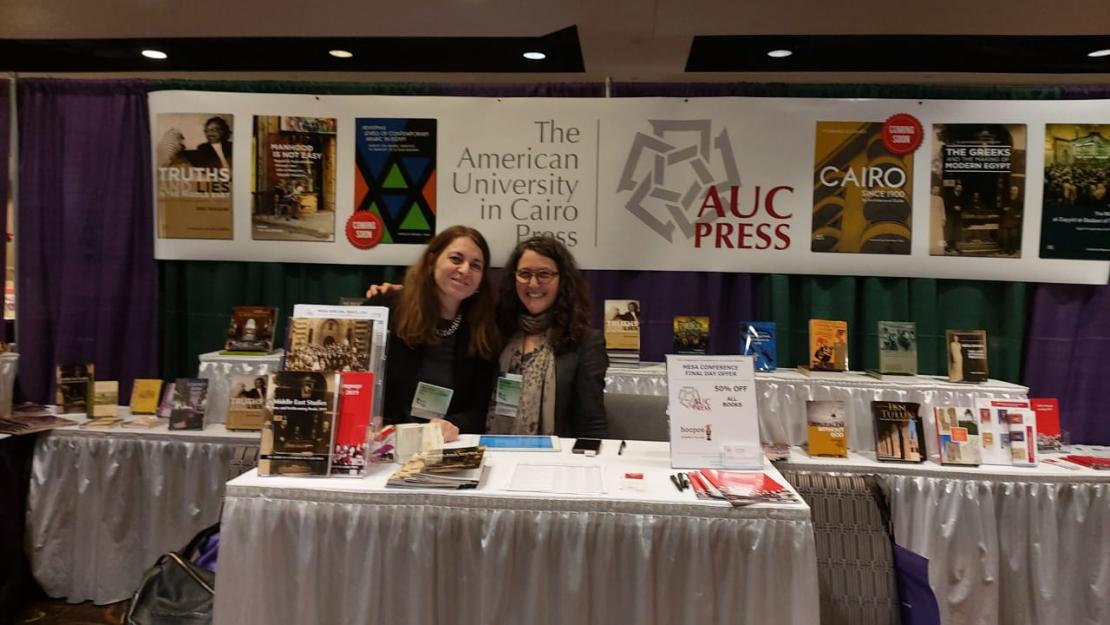 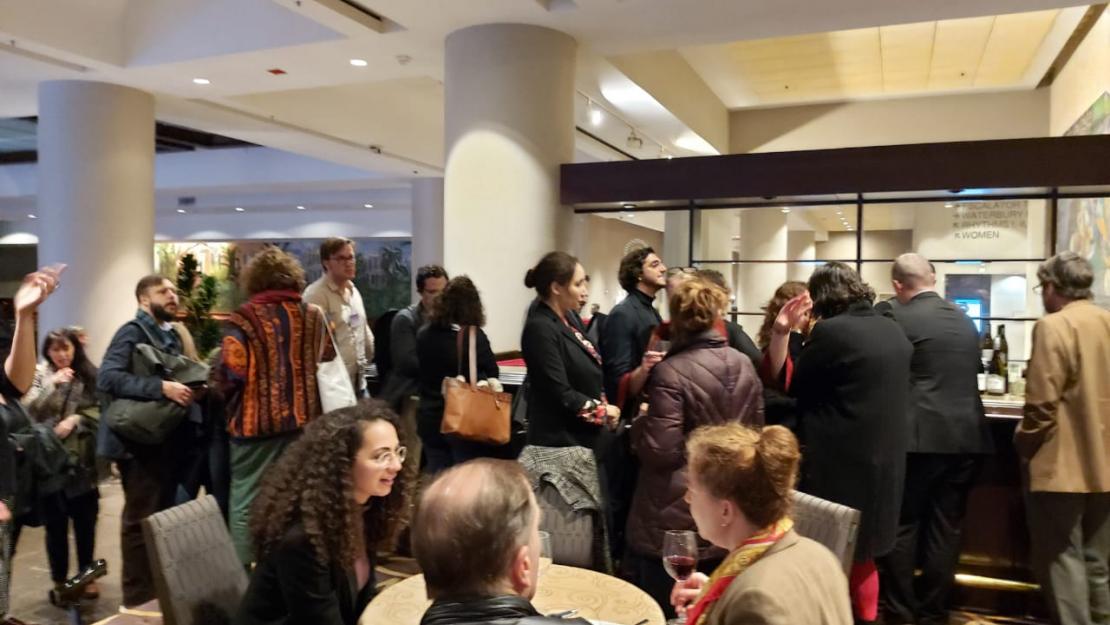 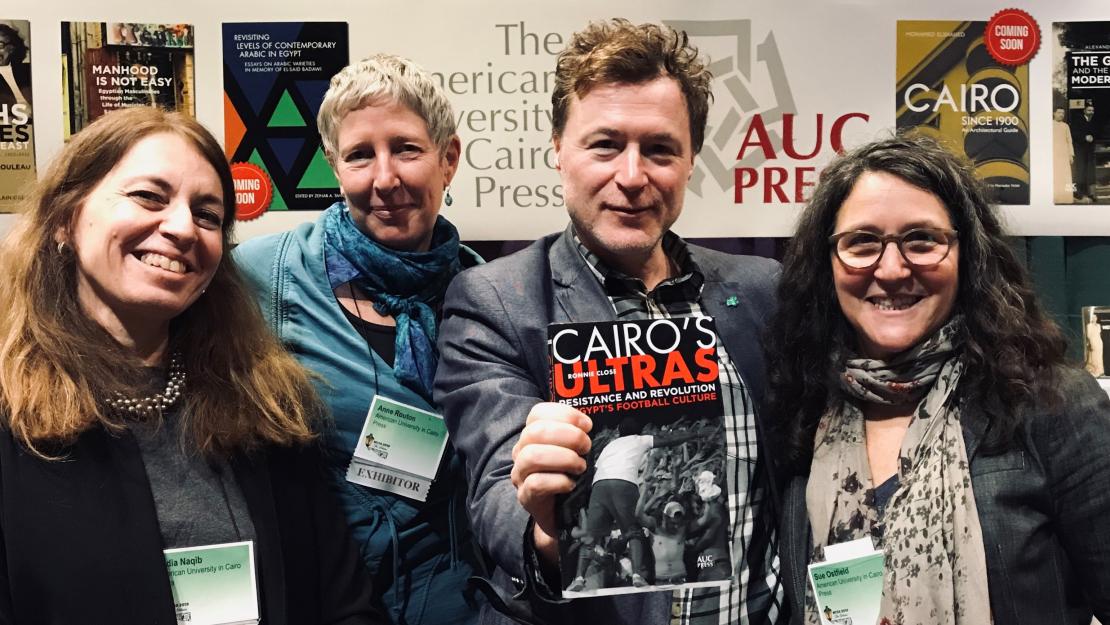 AUC was a sponsor of the 2019 Middle East Studies Association annual meeting — "the single largest gathering of experts on the Middle East."

At the conference, AUC faculty members from a variety a disciplines — ranging from political science, Middle East history, and journalism and mass communication to the arts, sociology, and Arab and Islamic civilizations — were part of a congregation of scholars from around the world, presenting and discussing their research on topics that included Arab cinema, the Nakba, gender and political science. Additionally, Noura Wahby '13 was given the 2019 Malcolm H. Kerr Dissertation Award for the social sciences for her PhD dissertation from the University of Cambridge titled, "The Role of the State in Urban Development: The Case of Urban Waterscapes in Cairo, Egypt." Wahby will soon be teaching at AUC's Department of Public Policy and Administration.

"In recognition of it’s importance and the importance of the study of the Middle East, AUC sponsored the meeting this year," said Rabab El Mehdi, associate professor and chair of the Department of Political Science.

Since its creation in 1966, MESA has been a hub for fostering understanding of the Middle East through programs, publications and services that bring together scholars and educators from around the world. The annual meeting provides a platform for these scholars and educators to share their research, engage in informative discussion and debate and enhance the study of the region.

"The work that you do as social scientists and in the humanities is more important now than ever before," said AUC President Francis Ricciardone, addressing the conference attendees. "Egypt and the region need the work that you are doing, whether as researchers or as teachers. AUC is a focal point for that, and that is our mission."

Several faculty members participated and led different panels and discussions related to their research. With recently published papers, books, new films and projects, they presented a range of ideas and findings on a diverse selection of issues throughout the region.

Dina Heshmat, assistant professor in the Department of Arab and Islamic Civilizations, took part in a session based on a chapter of her book, Egypt 1919: The Revolution in Literature and Film, which will be published in June 2020. Her panel was under a series of sessions called “Rethinking 1919,” which examined the different documented narratives during the anti-colonial revolution.

Also conducting research in film studies, Terri Ginsberg, assistant professor, Department of the Arts, presented a critical response to a panel on archival genealogies of U.S. cultural diplomacy in the MENA region, which includes papers on U.S. documentary diplomacy initiatives in Turkey and Iran during the Cold War. With her research focused primarily on Palestinian cinema, Ginsberg also chaired a panel focusing on the role and function of memory and history in interpreting political positionality in the Palestinian-Israeli struggle.

Discussing his paper, “Political Economy in the Middle East: The Limits of Universalism,” Amr Adly, assistant professor in the Department of Political Science, spoke on a panel examining the different political science approaches toward the MENA countries parallel to the economic development of the region.

With his research focused on Egypt-Palestine relations, Michael Reimer, associate professor in the Department of History, presented his paper, “Frontiers of the Nakba,” which discusses AUC’s response to the 1948 Arab-Israeli war. His paper focuses on AUC’s non-involvement policy when it comes to political affairs and how that clashed with the “intense” feelings about the situation in Palestine among students, staff and faculty. Additionally, with Palestinians then being the second largest ethnographic group after Egyptians at the University, Reimer discusses how AUC assisted the many students whose families lost their assets due to the Nakba.

“At the time, AUC was a small institution with very limited resources,” Reimer noted, “so the University administration appealed to various parties for help to cover the cost of educating its Palestinian students.”

Helen Rizzo, associate professor and chair of the Department of Sociology, Egyptology and Anthropology, attended MESA to chair a session on gender reform, resistance and trans-nationalism. Rizzo was recently elected to the board of one of MESA's affiliated organizations, the Association for Middle East Women's Studies.

Ronnie Close, assistant professor in the Department of Journalism and Mass Communication, attended MESA to present his research on the history of Cairo’s soccer fans as one of the most poignant narratives of the  January 25, 2011 Egyptian uprising as part of the panel “Egypt Since 2011.”  He also screened his film, More Out of Curiosity, during the MESA Film Festival.

"I really enjoyed MESA," Close said. "It was an incredible experience."