Dame Minouche Shafik: 'Talent is Spread Evenly Around the World, but Opportunity is Not' 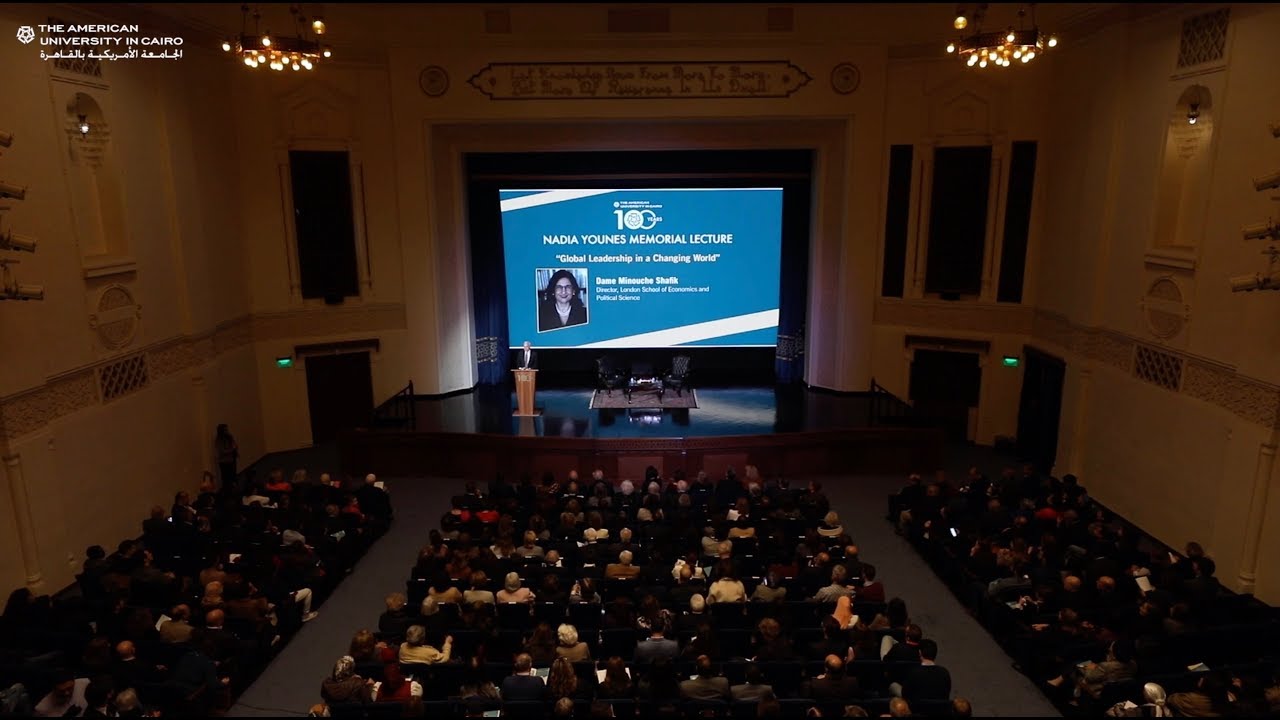 “I didn’t know Nadia Younes,” Dame Minouche Shafik stated as she began her lecture. “But I’m sure that if I did, we would have gotten on famously.”

Dame Minouche Shafik, director of the London School of Economics and Political Science and the first woman in the school's history to hold this position, was the featured speaker at this year’s Nadia Younes Memorial Lecture. Shafik also served as former vice president of the World Bank at the age of 36 — the youngest to ever hold this position — with an illustrious career in economics and academia behind her.

“She exemplifies in her life what we do, and that is inspiring explorers for lifelong journeys of challenge, discovery, innovation and service,” said AUC President Francis J. Ricciardone.

In her speech, Shafik tackled everything from social mobility and women in the workplace to cryptocurrency, but the main focus of her talk was on leadership in a globalizing world and the economic factors that lead to success. “How much of one’s success is the role of luck?” she questioned, describing how many outside factors contribute to an individual’s prosperity, including where someone is born, their family and education.

“I strongly believe that talent is spread evenly around the world, but opportunity is not.”

Shafik thinks that lucky or unlucky circumstances have a big impact on life outcomes -– frequently outweighing other factors. Citing her own accomplishments, Shafik stated that if she had been born into a different family with different opportunities available, she probably would not have come close to the level of success she has achieved.

According to Shafik, it is the job of the state through the social contract -– the set of rules and institutions that govern that relationship between a government and its citizens -– to compensate for the impact of luck on social mobility. “Every country relies on institutions to deliver its social contract: the family, the community and voluntary organizations, the state and the market,” she explained.

While the term social contract might feel abstract, to Shafik, it is an integral aspect of what makes societies and economies work or not work. The social contract can help make up for “bad luck,” or lack of opportunities people face through the provision of public goods.

What Happened in Egypt

“So what has happened in Egypt?” she asked.

According to Shafik, inequality in Egypt is actually low by international standards. She believes that the real economic crisis in the country is the deterioration of its middle class. She explained how the middle class has suffered from lower returns to education, cuts and subsidies that decreased public sector employment, contributing to high unemployment rates and declining public services.

“In the last decade, the percentage of downwardly mobile Egyptians has actually exceeded the number of upwardly mobile Egyptians,” she declared. She calls this phenomenon the “nouveau poor,” a condition where parental wealth, quality of education and access to social networks have become significant factors for success.

“In the past, the middle class could count on a conveyor belt of higher education leading to university, leading to public sector employment. But now, that conveyor belt has stopped,” she explained.

To Shafik, this is a framework where luck has more impact than effort in determining success, leading to young people having lower standards of living than their predecessors and an overall decline in life satisfaction and economic stability.

So what can be done? Shafik honed in on the importance of protecting and strengthening upward social mobility and supporting institutions that bolster it, such as education. And the focus on education needs to start early on. According to research Shafik cited, giving children access to resources such as nutrition and education in the first 1,000 days of their life has a huge impact on their future.

Shafik also affirms that a good leader is instrumental in bringing about positive change.

“Leadership is what you do when you cannot rely on management, when you face uncertainty,” she stated, citing Nelson Mandela and her grandmother as two examples of strong leaders. To Shafik, a good leader is someone who inspires and builds strong teams around them.

However, while she believes good leadership is important, she also believes many institutional factors influence change. One of these factors she focused on was gender parity. Despite woman making large strides in higher education, they make up a minority of the workforce.

“One of the issues in a country like Egypt is that there are many many incredibly talented young Egyptian women, but only 16 percent of Egyptian women participate in the formal labor market. And if you could equalize male and female labor force participation in Egypt, the economy would be 60 percent bigger,” she exclaimed.

“There are millions and millions of what they call hidden Einsteins throughout the country which, if that potential was tapped and they were given those opportunities, you would have a huge increase in innovation and productivity,” she elaborated.

However, Shafik is hopeful about women's participation in the workforce increasing.

“I think at the moment we really are on the cusp of potentially a major change, and I'm quite optimistic about not just all the women we see rising to the top, but also all the young women coming up who will fill those jobs in the future toward gender parity,” she stated.

For Shafik, taking advantage of these human resources, and providing more people the opportunities they need to be productive and creative is the key to shaping a brighter economic future — in Egypt and globally.

The Nadia Younes Memorial Lecture is a joint lecture series by the Nadia Younes Memorial Fund and AUC, bringing internationally renowned speakers to talk at the University. The fund was established in 2004 following the tragic death of Nadia Younes in the bombing of the United Nations Headquarters in Iraq. The fund aims to honor her memory and commemorate her achievements by advancing international relations and humanitarian affairs, promoting her passion fields to new generations of students.

The goal of the lecture series is to highlight speakers who have made a global impact and have a unique perspective on international policy. “We are interested in presenting practical solutions to real-world problems,” explained Fouad Younes ‘66, managing director of the Fouad Mahmoud Younes & Associates Consulting Company, as he introduced Dame Shafik.

Younes believes that Shafik shares not only AUC’s values, but also his sister’s. “They share a determination to show the world what an Egyptian woman is capable of achieving once she puts her mind to it,” he elaborated.

Besides her current position as director, Shafik has served as the vice president of the World Bank, permanent secretary for the Department for International Development, deputy managing director of the International Monetary Fund and deputy governor of the Bank of England.

Shafik was made a Dame Commander of the British Empire in the Queen’s New Year’s Honors list in 2015 and holds honorary doctorates from the University of Warwick, the University of Reading, and Glasgow University. Currently, she serves as a trustee of the British Museum, the council of the Institute for Fiscal Studies, the governor of the National Institute for Economic and Social Research, and is an honorary fellow of St. Antony’s College Oxford.