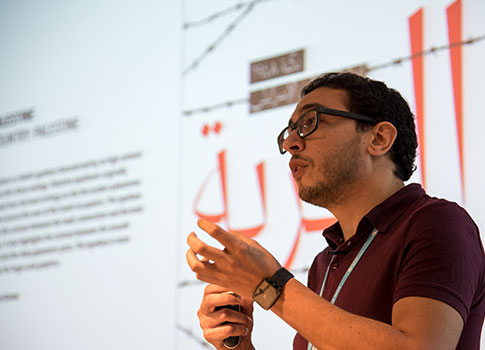 Nawar is an artist, designer and researcher who currently lives and works in Cairo. He is Assistant Professor and Director of the Graphic Design program, Department of the Arts at the American University in Cairo. Also, the founder and director of the Cairotronica, Cairo Electronic, and New Media Arts Festival.

Nawar received his PhD from the Planetary Collegium, Center for Advanced Inquiry in Integrative Arts, School of Art and Media, University of Plymouth. He holds a Masters of Advanced Studies ZFH in Spatial Design, Institute of Design and Technology, Zurich University of the Arts, Switzerland and an MFA in New Media and BFA in Printmaking from the Faculty of Fine Arts, Cairo, Egypt. He is a Fulbright alumni.

Since 1999, he has participated in several international exhibitions, biennales, and triennials, the latest of which was Venice Biennial in 2015.

2014 Jury member in the 25thYouth Saloon, Ministry of Culture, Egypt.