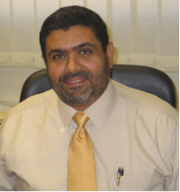 Ahmed Abou-Auf is professor of electronics and communications engineering at The American University in Cairo.

Abou-Auf joined The American University in Cairo in September 2006. He was the chair of the electronics and communications engineering department from 2008 to 2012, he was assistant professor at King Fahd University for Petroleum and Minerals, Hail, Kingdom of Saudi Arabia. He worked for Harry Diamond Laboratories, Adelphi in Maryland, United States from 1989 to 2001. Since 2001, he has been working as a consultant in the area of FPGA and ASIC design for signal processing systems. He recently consulted with Intel, Microsoft, Lockheed Martin, Cisco Systems, Mercury Computers, Magnolia Broadband and Memec Design Services. From 2001 to 2006 he worked as a consultant for FPGA based signal-processing systems. He has a number of publications in both areas.

His research interest is in total-dose testing of VLSI devices as well as developing methodologies for identifying worst-case test vectors. It also includes 3D imaging systems for laser-radar (ladar) sensors.