Spring is Here: Stay on the Lookout for What's Happening at AUC 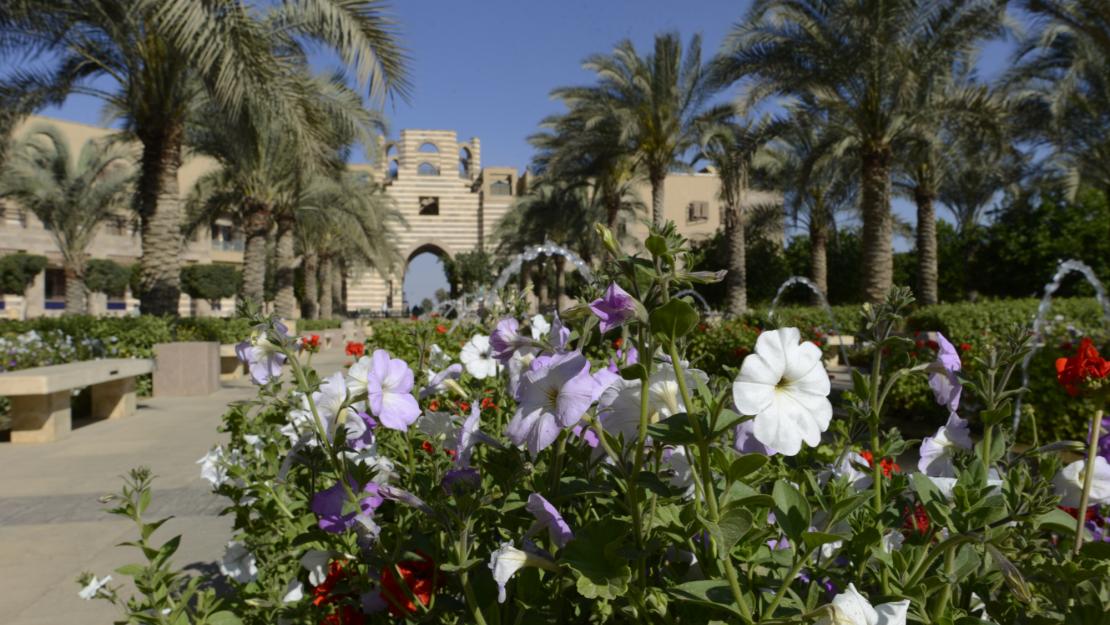 In between classes, studying and the essential lunch break, members of the AUC community are constantly filling their time with the myriad of events hosted by different sections of the University. No matter your interest, there’s an event to tempt your curiosity in the next few months. Red Line Dots Calligraphy
Opening on February 18, Red Lines Red Dots, a design retrospective exhibition exploring the work of Mouneer Alshaarani, a Syrian contemporary calligrapher who started calligraphy as a 10-year-old, will run for about three weeks in the Sharjah Art Gallery. The exhibition traces Alshaarani’s work from the 1970s to the present, with a focus on his creative process and the ideologies and events that shaped his art.

On February 21, the AUC community will have the treat of a visit by Maha Juffali and a special dance performance put on by talented students with special needs.

Met Opera All the Way from New York

If you’re in the mood to dress yourself up and leave Cairo for an evening –– virtually, that is –– the University’s Metropolitan Opera Live in HD program has several spring shows coming up. Broadcast live from New York, these showings include La Boheme by Giacomo Puccini on February 24, Semiramide by Gioachino Rossini on March 10, Cosi fan tutte by Wolfgang Amadeus Mozart on March 31, Luisa Miller by Giuseppe Verdi and Cendrillon by Jules Massenet on April 28.

Music to My Ears

The music program at Cairo is also constantly filling campus with tunes, day and night, with performances by gifted musicians –– from both inside and outside of the AUC community.  This spring will see a number of different concerts, showcasing guitar performances, the Egyptian Folklore Group, the AUC Music Group, the Cairo Choral Society as well as the department’s own music majors, among other recitals.

On March 22, the University will host a special event in memory of the late faculty member, soprano and music producer, Valerie de Casas Farag, who enriched the music scene at AUC with her many contributions to the music department. As Farag used to invite well-known musicians to concert series on campus, AUC honors her memory with a concert series hosting performers who worked with her in the past.

If Cairo’s movie theatres aren’t satisfying, you can also take a less commercial route with the University’s numerous film screenings, covering a range of thought-provoking topics, such as social justice and gender norms. From April 26 to May 1, in particular, the University doors will open to the public for the Visions Cairo Short Film Festival, which highlights both fiction and documentary films. In addition, there will be a two-day conference, Film Studies Conference: Cinema of the Arab World, feature critical scholarly presentations on cinema in the Arab world. The conference will touch on the Arab world's history, aesthetics, modes of production and reception. Academic scholars from the Arab world as well as from Europe and North America will be presenting throughout the conference. Beginning on March 3, Cairo International Women’s Film Festival will be held just before International Women's Day. This festival screens film that feature women from around the world.

Students Put on the Show

For live action instead of the screen, look out for student performances on campus. Each semester, theatre students dedicate their time to running lines and attending rehearsals to put on one-of-a-kind interpretations of thought-provoking and entertaining plays. This March, the Department of the Arts will be putting on Lysistrata, a comedy set in Greece at the end of the Peloponnesian War, and The Future is in the Eggs, which tells the story of a family desperately trying to preserve the safety of its race.

The AUC classroom is one filled with dialogue, debate and intellectual challenge. But what about all of those unanswered questions or last seconds of debate cut off by the end of a class? AUC likes to extend its intellectual discussion beyond the bounds of course curricula and classrooms to lectures, debates and workshops by distinguished global figures and academics, as well as its own faculty members. These events provoke curiosity and also serve to highlight the work of the University’s faculty members while opening the community to academic discussions taking place beyond Teseen Street.

Each year, the University honors the memory of Nadia Younes, who was tragically killed in the bombing of the United Nations headquarters in Baghdad on August 19, 2003, with a lecture by an internationally renowned figure. This spring, the memorial lecture will feature guest speaker Lubna Olayan, CEO and deputy chairperson of Olayan Financing Company.

Hosted by the Graduate School of Education, a lecture titled “Lessons Learned about Inclusive Education in the United States: Potential Implications for Egypt,” will take place on March 14, prompting discussion on meeting the educational needs of students with disabilities. The lecture will feature Michael Giangreco, professor at the University of Vermont.

A conference at the end of February will spark conversations on how language is conceptualized in different contexts, societies and cultural settings. Featuring several speakers, lecturers will dissect the role of silence in colonial linguistics, looking critically at the spaces in between, where topics or language are omitted, and what this means.

To encourage more intellectual probing and showcase student and faculty projects, the University also hosts an annual celebration of research. This year’s Research and Creativity Convention will take place from April 21 to April 26 and invites members of the University community to submit their research –– of all forms –– to be showcased at the event. Comprised of competitions, lectures and workshops, this convention aims to celebrate research and its impact, stimulating creativity, innovation and even more research!

It’s Spring! Book Fair Time
The AUC Library and AUC Press Bookstore are open throughout the year, inviting community members to seek answers to their questions and broaden their knowledge. Even so, the Spring Book Fair, beginning on March 25, takes it one step further, welcoming the public to flip through AUC’s store of books and persuading students to peruse more pages with tempting discounts.

Even as undergraduate students approach commencement and finalize their studies, AUC tries to continue to instill a love of learning and pushes for further intellectual discovery. The Graduate Studies Open House will take place on March 3, exposing students to future opportunities for a postgraduate education.

For the AUC Community

While AUC loves opening its gates to its neighbors and surrounding community, the University also enjoys spoiling its internal community with a host of private events. These events aim at bolstering community connections, helping AUCians as they decide next steps and celebrating the many voices that make up our campus.

These events extend to those AUCians who now lead lives outside of campus as alumni. Alumni events promote networking for expansion of both social and professional circles and also give students the chance to hear from people in the “real world” who were once students just like them.  The AUC community can look forward to networking breakfasts and a Student Union Alumni Chapter event this spring. Alumni networking breakfasts will cover a range of topics, including the Real Estate Bubble.

Looking for a Job?

The Spring Employment Fair in May also gives both students and alumni the opportunity to hop around different booths and get a sense of the various job opportunities available out there in that “real world.”

Our annual International Day celebrates diversity on campus and sets aside a day for community members to showcase their cultural backgrounds, displaying traditional food and handicrafts and waving their country’s flag proudly in a parade.

Of course, there’s also always room to bond with fellow AUCians at fun events, like our upcoming Alumni sohour on May 25. This event gives individuals a chance to gather, celebrating the spirit of community underlying Ramadan and spreading AUC love!

As a hub for dialogue and knowledge-sharing, AUC loves to host conferences that both celebrate the its own initiatives and invite members of the University community to engage with international scholars and leaders. This month, the Center for Learning and Teaching is celebrating its 15th anniversary with a  three-day event, featuring both AUC and international speakers. The topics to be covered include digital learning and teaching innovation.

This is just a peek at the loads of events being planned for AUC community members. To keep updated on these and more events that will keep popping up, make sure to follow the AUC Calendar!