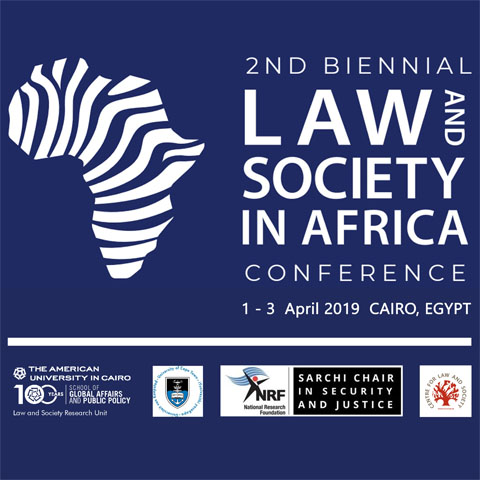 Second Biennial Conference on Law and Society in Africa: "Africa and the Middle East in an Era of Global Fragility"

Human dignity and the rule of law are under threat across the world. As the foundations of legality came under attack, the first casualties have been the so-called pillars of liberal democracy: the rule of law, constitutional separation of powers, civil liberties and even free trade and the international legal regime governing it. In 2011, we saw the domino effect of social mobilization and revolutions in many parts of the global South. Since 2015, the reverse of this democratic tide has been taking shape, both in the global North and South. Regional conflict and the biggest refugee crisis since World War II have sparked the mobilization of identity politics on a scale that some compare to that of the 1920s.

Autocratic rule by populist diktat is becoming increasingly prevalent in old and new democracies alike. Working at the intersection of law and society, we are concerned with the effect these developments are having on social and legal institutions. The erosion of the rule of law and increasing hostility towards “liberal legality” and its institutions -- including international institutions such as the International Criminal Court -- may vary in degree from one place to another, but it acts like a ricocheting ball, with a political event in one country knocking others in ways that can be hard to predict.

Fragility is no longer a term reserved for Middle Eastern and African states. The international legal regime, mega-polities such as the European Union, and constitutional democracy in states like the United States, Italy, and Brazil are becoming increasingly fragile. But our region does have its own unique challenges. These range from the prolonged conflict in Syria and Iraq to the changing face of occupation in Palestine; from difficult transitions and authoritarian turns in the region to challenges of political consensus and countering terrorism in Tunisia, Kenya, Mali and Nigeria. This also includes the rise of populist nationalism in South Africa. A flurry of legislative activity under the pretext of reform is taking place in many countries in the region, most recently in Algeria.

New internet surveillance and censorship bills have either already been passed or are being discussed in Egypt, Uganda, Tanzania and South Africa. Counter-terrorism legislation and new laws on assembly and association are proliferating. Colonial laws are invoked to stifle contemporary protest and civil society activism.

It is clear that we are in an era of struggle -- a social and political struggle that will happen both inside and outside of the law. At the Second Biennial Law and Society in Africa Conference, we aim to situate the African and Middle Eastern experience within the current fragile global context to understand its impact and ramifications on our region.

This year's conference will focus on a specific set of themes: "the Institutions of Law," "Migration and Refugees," "Criminal Justice Reform," "Combating Sexual and Gender-Based Violence," and "Traditional Bodies of Law and Alternative Forms of Justice."