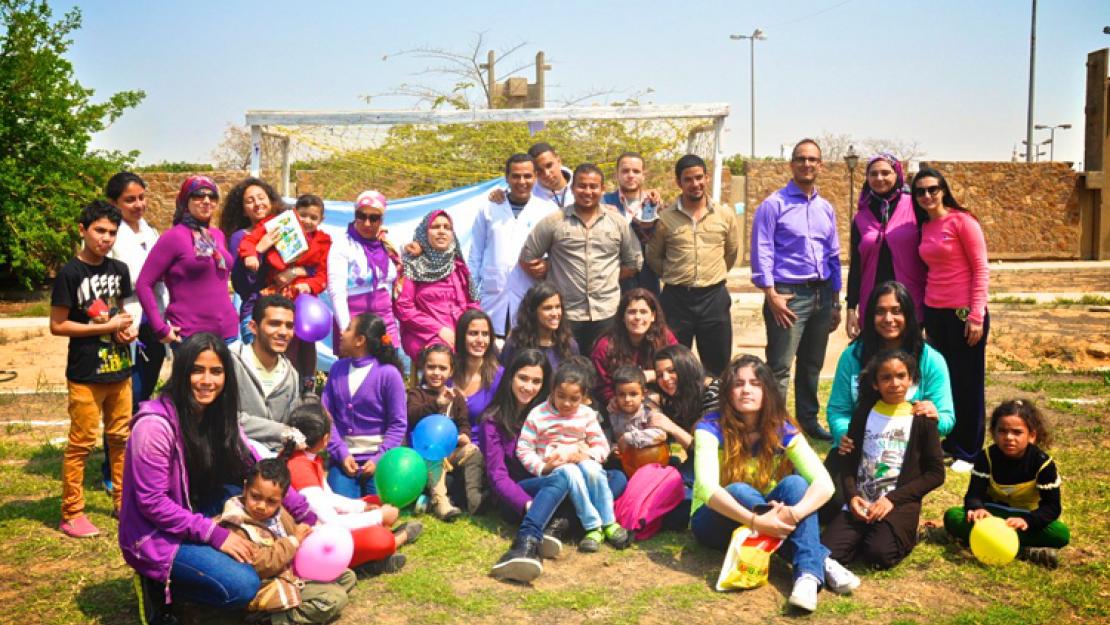 As part of the community-based learning course RHET 1020, students volunteered at Abbassia Hospital on Purple Day, an annual event that brings awareness to epilepsy, and participated in interactive activities with kids affected by the disorder. Following the visit, students organized a campus awareness campaign about epilepsy and produced videos that discussed the stigmatization of those affected by the disorder.

The experience gave students a new perspective on epilepsy, which is a neurological disorder characterized by seizures that affects 65 million people worldwide. In some countries, people with epilepsy often face the social stigma that the disorder is related to witchcraft or sorcery, and that it is contagious. “I read about the stigma facing the children with epilepsy but I didn't completely grasp or believe it until I saw them personally,” said Hana Mandour, a freshman. “That is when I realized that I had previously formed a false opinion about them even though I have never dealt with a child who had epilepsy before.”

After the hospital visit, students organized an epilepsy awareness campaign on campus with support from NOLA Cupcakes that raised LE 3625 and produced videos about the stigmatization of the disorder. The project included a collaboration with students at the American University of Beirut (AUB) also involved in disability-related CBL projects and culminated when Mikhael and a delegation of students shared their work at AUB’s Annual Celebration of Writing.

These efforts were part of research writing course that aims to teach students about research writing. The visit to Abbassia Hospital was part of the CBL component of the course. “Because of the visit to Abbassia Hospital, students come away with an understanding of primary research, research to understand an issue, audience and purpose,” explained Mark Mikhael, a writing instructor in the Department of Rhetoric and Composition who teaches the course. “They went on to create research-supported arguments in the form of videos targeting children with epilepsy or their caregivers promoting self acceptance and compliance with medical treatment respectively.”

Mandour noted how this course gave her a deeper understanding of issues like epilepsy through different types of research. “Through this RHET course I have learned the importance of each kind of research: informational, academic and primary research,” Mandour explained. “I have also learned how each kind research completes the other and contributes in forming a clearer picture and in building a stronger perspective about a topic. For instance, the exploratory research helped me to understand the idea. Then, the academic research helped me to make it more academic by supporting every fact with percentages and case studies. Finally, the primary research and seeing the children with my own eyes proved how essential primary research is in understanding a topic. It allows you to observe the subject of interest and evaluate it for yourself.”

Beyond gaining an insight into research methods, Mikhael noted that this course encourages students to become “active citizens” through community-based learning, a teaching methodology established at AUC in 2008 that integrates community service with the academic curriculum. “Community-based learning is a preferred pedagogy,” Mikhael said. “What is happening is that we are teaching students to be critical thinkers and good citizens. The kind of person AUC places into the world.”

Mandour acknowledged the change that occurred in her after her experiences at Abbasia Hospital. “I wasn't so much into community work as I always thought that I do not have enough time for it, but then I went to Abbasiya Hospital just because it was required from the RHET course, and once we arrived there everything changed for me,” said Mandour. “I saw the smiles on the children's faces when we read them stories and colored their faces, I felt something move inside of me. At this particular moment, I knew that the world is much bigger than my GPA and the courses I choose to take.”

Through community-based learning, AUC students were able to affect the lives of these children by playing games, reading books and organizing face-painting and other activities. “On that day, there were 40 children with parents and 50 students, a total of 90 lives interrupted by hope — people’s who’s every day experiences has changed because they interacted with someone who cares about them,” Mikhael said. “AUC student gain the understanding that these children are just like them and the kids, in turn, no longer feel stigmatized or ‘weird.’”

Mandour noted that these types of experiences also change perceptions of AUC students. “Even AUC students are stigmatized,” Mandour said. “People think that AUC students do nothing but party and have fun. They think that we live in our own bubble and that we do not care whatsoever about what is going on in the outside world. Thus, I think it is important that AUC students get involved in the community outside of AUC because that may contribute in changing the image that the society has of us.”