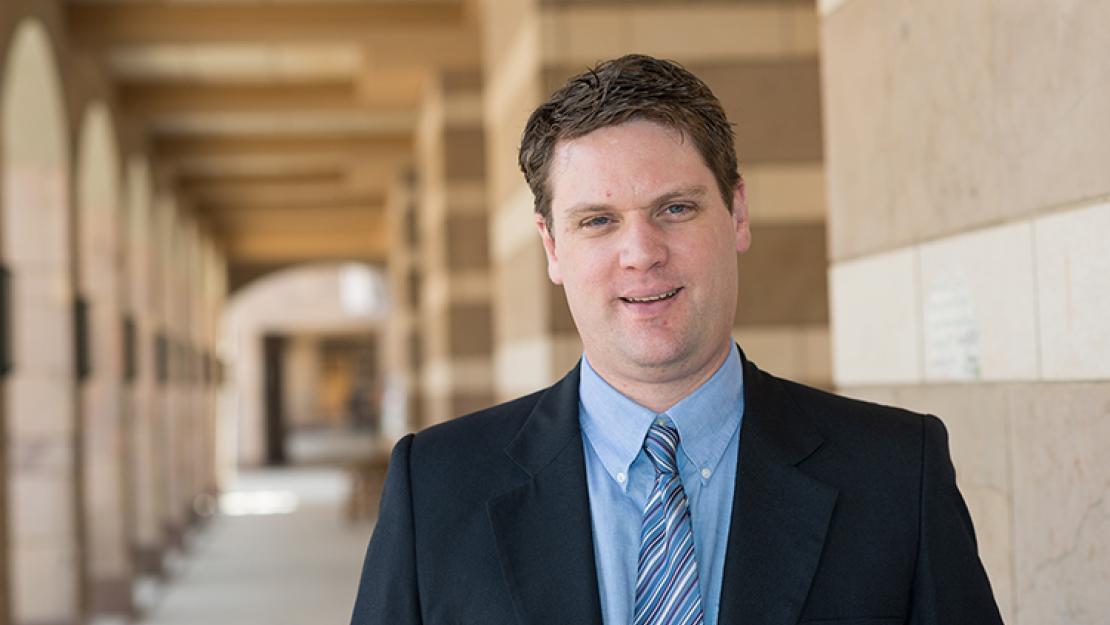 Ted Purinton, dean of the Graduate School of Education (GSE), aims to reform education across Egypt.

To improve education in Egypt, Ted Purinton, dean of the Graduate School of Education (GSE), is focused on the big picture.

“There is an enormous amount going on in terms of education reform in this country,” said Purinton. “As a school, our goal is not to get right in the middle of it, but to take a step back and interpret what is going on and provide a more analytic voice.”

There needs to be a change in how education is viewed across the country, at both the political and local levels, Purinton declared. “We want people to start using evidence-based approaches to education and to rely on the vast amounts of education research that many countries have been increasingly using to make important decisions for schools, universities, classrooms and systems,” he said. “But for people to make use of it, they have to believe it and move past simplistic assumptions regarding the processes of teaching and learning. Many countries across the world have still been struggling with the idea that education isn’t just an extension of one’s beliefs, or that it is simply the transfer of knowledge from one brain to another. Evidence points the way, and it is extremely detailed.”

And that’s where GSE graduate students come in, with their academic research on education reform in Egypt. “We want to be able to provide reasonable and helpful advice at all levels, based on evidence and the increasingly sophisticated methods of education research.”

With a significant number of AUC undergraduate alumni teaching at private schools across Cairo and with no mandatory system for teacher certification in private schools in Egypt, Purinton sees opportunities at the University to raise awareness among AUC students on issues in education, both politically and institutionally. “We want to engage undergraduate students a lot more, as they increasingly will be involved with, or will have a say in, education in the country,” said Purinton.

AUC is also in a strategic position to have an impact beyond Egypt, particularly with the refugee crisis related to the Arab region, Purinton pointed out. “We want to do a lot more work on the issues of ‘education in emergencies’ for displaced families and communities from Arab countries,” he said.

Specially designed education for refugee populations not only provides a much-needed sense of stability for children, Purinton noted, it also ensures that they continue to build personal identity with their home countries –– something that affects them intellectually and academically for the rest of their lives. “This is an important contribution that AUC can make,so it is another area that we are going to be putting a lot of emphasis on in the coming years, particularly through the leadership of the Middle East Institute of Higher Education,” said Purinton.

Additionally, the internationalization of higher education has become a prevalent trend in all countries, and the GSE is using academic research to connect AUC’s unique position in Egypt to making an impact on similar universities globally. “AUC is a very dynamic institution, particularly because we are the second oldest American University abroad and one of the best regarded,” said Purinton.

He added that many American-style universities have opened abroad in the past decades, and they look to AUC as an example of how to adapt liberal arts values to local cultures. Purinton anticipates that the GSE will contribute more directly in the years ahead to the global dialogue on transnational education.

The genesis of the Graduate School of Education was in 2006, when AUC first started offering professional development programs in education. By 2010, the desire to provide graduate studies for leaders and activists in education grew into the Graduate School of Education, which focused more intensely on producing applied research to influence decision making at all levels. Now,the GSE has two master’s programs, in addition to six Professional Educator Diploma programs. In addition, its influential Middle East Institute of Higher Education has successfully connected Egyptian and regional faculties of education to European institutions, and to one another, to build capacity in teacher professional development.

The first five years of the GSE have been focused on developing academic programs. Now, as the alumni base is growing, graduates are spreading the school’s reputation globally. Many of them have gone on to work in NGOs, multilateral organizations and research institutes, where they have been influential in terms of policy, as Purinton noted. “We’re starting to make an impact in the region,” he said. “Our graduates, who are steeped in the traditions and the recent innovations of education research, are getting hired into leadership positions or are getting accepted into top-ranked PhD programs in the United States and Europe.”

In the coming years, the school will continue to expand its professional development programs, including seminars and workshops, to provide skill-based training to school and university leaders across the country. “We are already doing a lot of teacher professional development,” said Purinton, “but we are going to build on that and work with the School of Continuing Education to assist us in our operations so that we can have an even bigger impact.”

In all, Purinton is very optimistic about the role that GSE will continue to play in educational reform in the region. Its Middle East Institute of Higher Education is incubating policies and practices, the graduate programs are building a cadre of educational leaders in the country who are versatile with education research and the professional development programs are reaching wider audiences. “AUC has a great opportunity through the GSE to demonstrate its commitment to education in the country and the region,”Purinton said.