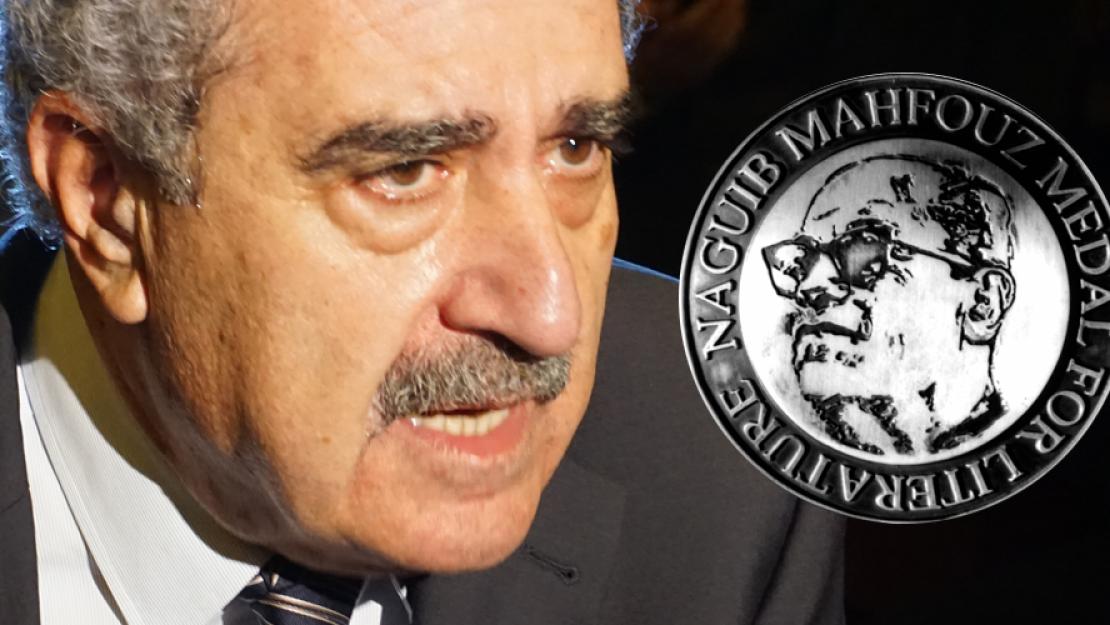 Lebanese writer and journalist Hassan Daoud was awarded the 2015 Naguib Mahfouz Medal for Literature Award at the awards ceremony on Saturday for his novel La tariq ila al-janna (No Road to Paradise).

Daoud joins author Hoda Barakat as the second Lebanese writer to receive the Naguib Mahfouz Medal for outstanding novels written in Arabic that have not yet been translated to English. Established in 1996 by the AUC Press to support contemporary Arabic literature in translation, No Road to Paradise will also be translated into English and published by AUC Press as part of the award.

No Road to Paradise examines the midlife crisis of a small town’s Imam, and how he decides to choose his own path. Described as “a marvelous psychological novel that penetrates the enigmas of time and man in a religious society,”  the panel of judges noted the novel’s subtle complexities. “Daoud’s evocation of a character enclosed in his existence in a southern Lebanese village is subtle and profound. .. . The work’s insights are Proustian in their precision. Each paragraph is like a wafer-thin cross-section of reality, so simply presented that the problems and questions that each action raises are exposed in all their complexity.”

Thematically, the novel explores the relationship between religion and individuality. “Through narration reminiscent of Ernest Hemingway’s narration and short, crisp sentences that conceal more than they reveal, the author quietly weaves the climax,” the judges explained in their citation of the award. “This is his powerful response to his fate. He refuses what he has been subjected to all his life on the threshold of death and is transformed into a real hero in the final pages after being an anti-hero throughout the novel.”

A panel of experts chooses one work to receive the award annually. This year’s award award committee included five professors from universities in Egypt and abroad: Tahia Abdel Nasser, assistant professor in the Department of English and Comparative Literature at AUC, Shereen Abouelnaga, adjunct faculty member in the Department of Arab and Islamic Civilizations at AUC, and Humphrey Davies, renowned translator of Arabic fiction, historical and classical texts at AUC, Mona Tolba, associate professor of Arabic literature at Ain Shams University, and Rasheed El Enany, emeritus professor of modern Arabic literature at the University of Exeter.

At the award ceremony, the AUC Press also celebrated the recent publication of six new paperback editions of Naguib Mahfouz novels, The Harafish, Children of the Alley, Khan al-Khalili, Midaq Alley,The Mirage, and The Thief and the Dogs, as well as a new translation of Mortal Designs by Reem Bassiouney.

The AUC Press also announced the launch of its new paperback fiction imprint, Hoopoe, for Spring 2016 and four titles to be published under the imprint in March and April: The Televangelist by Ibrahim Essa, A Rare Blue Bird Flies with Me by Youssef Fadel, Whitefly by Abdelilah Hamdouchi and Time of White Horses by Ibrahim Nasrallah.

The AUC Press has been the primary publisher of Naguib Mahfouz’s English-language editions for more than 25 years, and has also been responsible for the publication of some 600 foreign-language editions of the Nobel laureate’s works in more than 40 languages around the world since the author won the Nobel Prize for Literature in 1988. With up to 60 new publications annually and more than 800 titles in print, the AUC Press is recognized as the region’s leading English-language publisher.

Nominations and submissions for the 2016 Naguib Mahfouz Medal for Literature are welcomed at any time until 15 February 2016. Arabic novels published for the first time in 2014 or 2015, and not yet translated into English, are eligible. Click here for details.