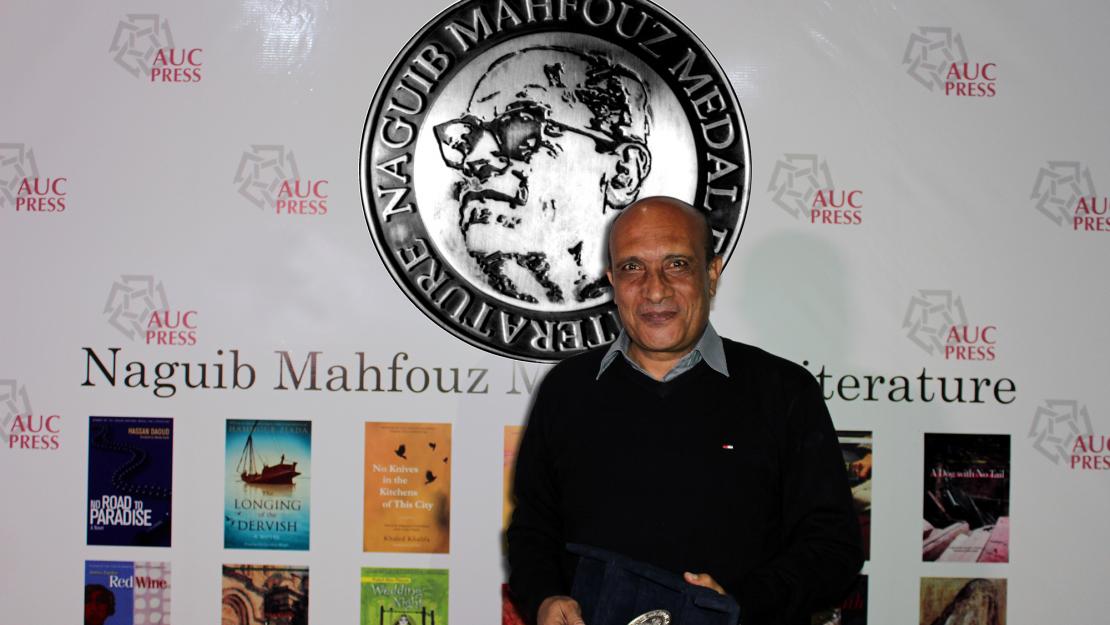 “I thank those who selected my novel for this prize,” said Esmat during his acceptance speech. “You have awarded me a moment of joy, for which I was most in need. I learned much from the conversations of Naguib Mahfouz and his way of thinking and way of life, almost more than I learned from his artistic production, though I had been fully enriched by his works and their atmosphere since early youth.”

Members of the Mahfouz Award Committee selected Esmat for the award, describing Hikayât Yûsuf Tadrus as “a journey in search of light, not undertaken by a Sufi or a priest but by an artist, who does not long for loss of self in light, but strives to capture what flows of its rays and shadows, clusters and spaces, luminosity and dissipation.”

Born in the governorate of Gharbiya, Esmat is the author of a short story collection titled Qusasat (Cuttings) and five novels including Ayam al-nawafidh al-zarqa’ (The Days of Blue Windows), for which he received the 2011 Egyptian State Award. Esmat graduated from the Faculty of Arts at Ain Shams University with a major in philosophy, and holds a higher education degree in library science from the University of Tanta. Esmat currently works as a library specialist in the Egyptian Ministry of Education.

The award ceremony, which was attended by writers and distinguished personalities of Egyptian cultural life, also celebrated the recent publication of six new paperback editions of Naguib Mahfouz novels (In the Time of Love, Miramar, Before the Throne, Love in the Rain, The Beginning and the End, and The Final Hour), as well as the launch of Hoopoe, the new AUC Press paperback fiction imprint. Hoope is already featured in 10 AUC Press publications, including two past winners of the Naguib Mahfouz Medal for Literature: No Knives in the Kitchens of this City by Khaled Khalifa and The Longing of the Dervish by Hammour Ziada.

AUC Press has been the primary publisher of Naguib Mahfouz’s English-language editions for more than 30 years and has established the Naguib Mahfouz Medal for Literature in 1996. In addition, AUC Press has been responsible for the publication of around 600 foreign-language editions of the Nobel laureate’s works in more than 40 languages around the world since the late author won the Nobel Prize for Literature in 1988. With up to 60 new publications annually and more than 800 titles in print, AUC Press is recognized as the region’s leading English-language publisher.

Nominations and submissions for the 2017 Naguib Mahfouz Medal for Literature are open until February 15, 2017. Arabic novels published for the first time in 2015 or 2016, and not yet translated into English, are eligible. For details, click here.