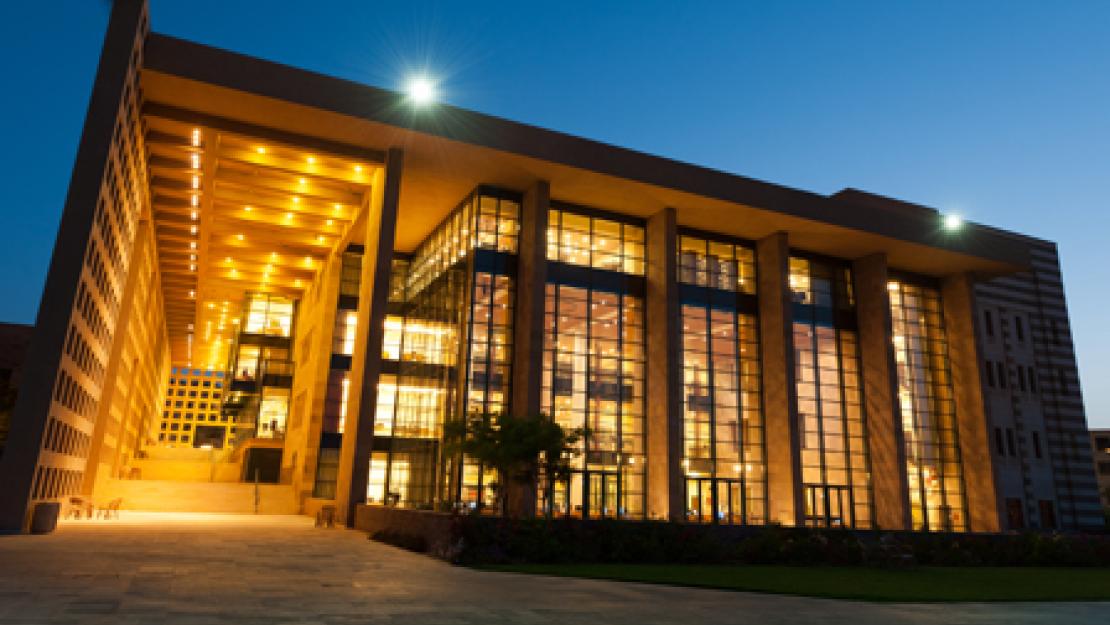 In 2011, AUC set a target to reduce energy use by one-third within three years. Under the guidance of the University energy conservation team, this goal was achieved in only two years, reducing the amount of energy used by 35 million kilowatt hours annually and saving the University an estimated $2 million annually, a one-third reduction in the utilities budget. The amount of energy saved has been so great that in February 2013, the University used less energy than it did in February 2011, when both campuses were closed for half a month following the January 25 Revolution.

“The largest single component of this saving, which was achieved under the leadership of Sustainability Director Marc Rauch and with the efforts of a multidisciplinary energy resource and conservation team, relates to improved management of chilled water and a focused approach to overall energy use,” said Brian MacDougall, executive vice president for administration and finance.

The bulk of the savings was achieved by managing the heating and cooling system on the New Cairo campus more efficiently. “When I came to AUC in 2011, about 70 percent of the total energy used was going toward heating and cooling,” said Taha, an engineer with a background in building management systems at Siemens.“We did a full modification of the HVAC (heating, ventilation and air conditioning) control system, altering the temperature set points and implementing a system to ensure that all the spaces on the campus were not being heated or cooled when they were not in use.”

In order to heat and cool AUC New Cairo, the University contracts with a company that operates the chillers and boilers in the on-campus plant. The University pays the energy costs for the operation of this plant. “It takes a lot of energy to create the chilled or hot water,” affirmed Taha.

Rauch noted that half of AUC’s electricity usage at the New Cairo campus was devoted to operating the air conditioning system. “We changed the set points for air conditioning and heating so they were not too low in the summer or too high in the winter,” said Rauch. “Before this, you would often see people wearing layers in the summer because their offices were too cold, or people would open doors and windows to try to control the temperature. We modified these set points based on trial and error to achieve reasonable comfort levels instead of overheating and overcooling.”

The team also tackled the problem of empty spaces being heated or cooled, especially large lecture halls and theaters that are only sometimes in use. “We now provide heating and cooling to these spaces, which consume enormous amounts of energy, only when they are scheduled to be used,” Rauch explained. “We start to cool or heat a space an hour before it will be used to get it to a comfortable temperature, then we leave the heat or AC on for an hour after use for cleanup. The rest of the time there is simply no need for heating or cooling.”

The potential to reduce the use of heating and cooling systems was built into the design of the campus, affirmed Salloum: “The building orientation, composition of the walls and the placement of windows and doors was intentional to reduce the transfer of heat into the buildings during the summer and out of them during the winter.”

Salloum added, “The current energy saving exercise is a translation of the New Cairo campus design into operational modes whereby we can implement embedded opportunities in the design for greater energy savings. The campus was designed to fit into its environment and reflect this mission in its buildings, walls, landscape and layout. The design achieved the objectives set in the criteria for the new campus, and the second stage is operational now. The campus management systems are being fine tuned to operate on the same level as the design.”

Although lighting uses far less energy than heating and cooling, changes in the lighting system on the New Cairo campus have also helped the University to meet the energy reduction goal a year earlier than the target date. The campus’s 30,000 public lights, which are found in corridors, arcades, chandeliers and open office areas, are controlled by the Lutron timed lighting system, while lights inside offices, classrooms, conference rooms and labs are controlled manually by wall switches. “A team is going from building to building to develop an individualized lighting program based on that type of building’s unique needs,” said Rauch. “For example, the dorms have different lighting needs than the Administration Building or classroom buildings.”

The lighting schedule is currently divided into daytime working hours, when fewer lights are on because of the availability of natural light; evening working hours, during which more lights come on to accommodate late classes and faculty and staff members who are still working; and overnight and Friday hours, when only 25 percent of the public lights are on in most areas (the same level of lighting as during the daytime hours). The Lutron lighting project is two-thirds complete, according to Rauch and Taha, with the new system in place in most buildings and focus turning soon to the extensive outdoor lighting.

“Even during the evening working hours, we discovered we only need to use 50 percent of the public lights inside buildings and in corridors,” Rauch explained. “This means that most of the time (i.e. during the daytime working hours and overnight) we are only using 25 percent of our lighting capacity, and we are only using 50 percent several hours a day.” The campus-wide recalibration of the lighting system should be completed by the end of the 2013 - 2014 academic year, resulting in a further reduction of energy usage and greater efficiency in campus lighting.

The energy team aims to reduce energy usage by as much as another five percent by August 2014, resulting in a total reduction of nearly 40 percent over three years. The team will also focus on maintenance and awareness raising in order to ensure continuous improvement and sustainability in University infrastructure and operations. “We are working to optimize maintenance to increase the life cycle of equipment so it does not need to be replaced as frequently,” explained Hesham Abdel Aziz. “This saves the University money and is more sustainable. We are working to change the culture surrounding energy use so there is more awareness about conservation.”

While focus will be placed on maintaining the gains that have been made in the last two years, Taha assured that further projects are being discussed and researched, including the use of renewable energy. “We are still studying our options, but the group has lots of ideas that are being explored,” he said.

Affirmed MacDougall, “Sustainability is an essential ingredient in our overall plans going forward. The savings from utilities were recognized as part of our efforts to lower the cost of operating the University as we continue efforts to effectively and efficiently manage the limited resources that we have. The savings should be thought as a reduction in the overall pressure on the University to balance revenues and expenses.”