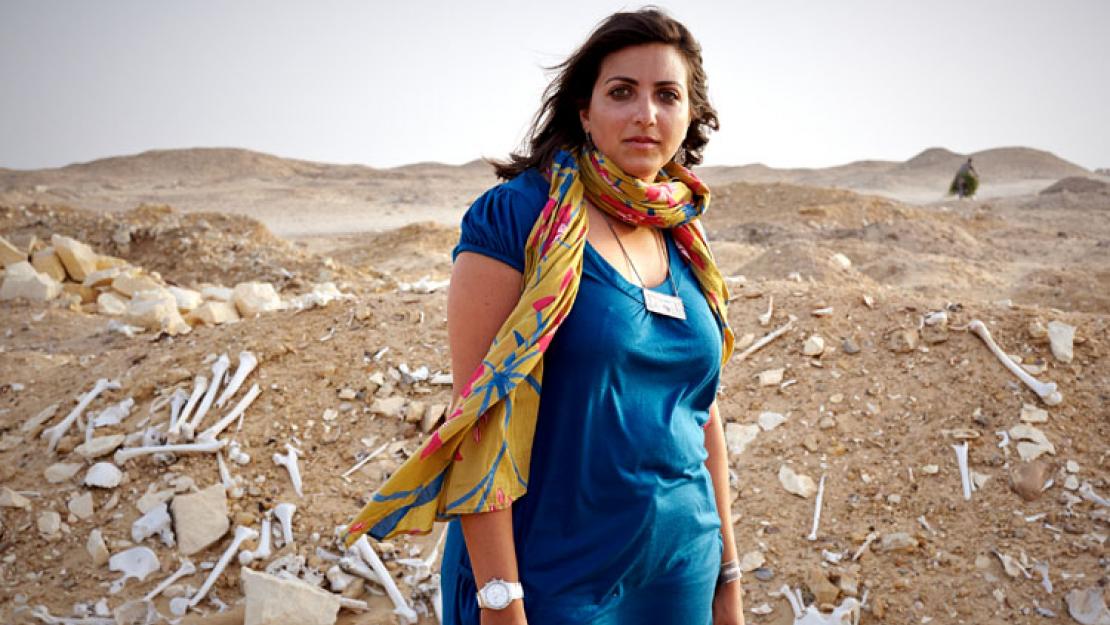 AUC alumna Monica Hanna ’04, ’07 has been recognized by the Saving Antiquities for Everyone (SAFE) nonprofit organization for her tireless efforts to publicize and expose the rampant looting of Egypt’s ancient Egyptian, Coptic and Islamic archaeological sites.

“Indefatigable Egyptian archaeologist Monica Hanna has been singlehandedly exposing an incredible amount of looting in Egypt, even going so far as to confront some of the armed looters herself,” noted the SAFE website.

One of four members making up Egypt’s Heritage Task Force, Hanna will be traveling to New York City in early April to accept the SAFE Beacon award, which recognizes extraordinary achievements in raising public awareness of endangered cultural heritage, as well as the damaging repercussions of the illegal antiquities trade. Established in 2004, the SAFE Beacon award has been presented to authors, journalists, professors, law enforcement professionals and archaeologists.

Hanna, along with three of her friends, has been working against the looting and destruction of Egyptian archaeological sites and monuments since January 25, 2011. After being alerted to looting that is taking place, the task force members travel to the site in question, photograph the damage and remains –– if any –– and record the losses by comparing their photos to older ones on Google satellite images.

“We usually hear about looting because site inspectors would call and tell us,” Hanna explained. “Other times we hear about it through media or other outlets. For example, we heard about the looting in Abu Sir al-Maleq because we had friends who were driving to Beni Suef, and they called to tell us that there were colored sarcophagi being sold in the area.”

The worst cases of looting have primarily taken place in Middle Egypt “mostly because it has the least amount of tourism right now, and locals are looting in an effort to make a living without the tourism market,” she noted. “The Memphite Necropolis, Beni Suef and Minya, Akhmim in Sohag and the Delta all had antiquities from the early period, and several of the sites are virtually barren now.”

Other badly hit areas include Ansina, which previous to the heavy looting was once home to a vast number of Coptic artifacts. In many sites, “entire tombs, including the sarcophagi, mummies and wall paintings, have disappeared overnight,” Hanna added somberly.

Perpetrators of looting primarily fall into two categories, which Hanna described as “locals from poorer areas” and “a high-tech, organized mafia.” The mafia, she noted, possesses powerful SUVs, modern excavation equipment and is "incredibly dangerous." Armed with machine guns, they typically employ the services of Egyptologists or other antiquities experts who have put aside their professional ethics in exchange for a payoff. “They know exactly where to go dig and are able to properly price the materials,” Hanna said, adding that if there is to be any hope for the state of Egypt’s archaeological monuments and objects, serious reforms must be made quickly.

“There must be an immediate effort to rescue archaeology,” she asserted. “No new concessions should be allowed, and we should have rescue or salvage archaeology carried out between Egyptian and foreign teams as quickly as possible to document what’s left behind.”

“I don’t think people realize how bad it really is,” she continued. “Our archaeological treasures are literally running out now, and the long-term impact will be huge. Look at Beni Suef, where Abu Sir al-Maleq is located. It’s a 500-feddan site. A local museum could have been housed there, and locals could have been employed to work on the site. This can’t be done now because the area is completely dug up. We’ve lost the strategic treasures there.”

In a positive turn of events, the attention being received by the task force as a result of Hanna’s award has helped boost the cause domestically and internationally, which Hanna hopes “will continue to bring more attention to the issue so that people will be more keen on realizing that this is a problem we all have to deal with.”

She affirmed, “It is the responsibility of every Egyptian now to stand up and act. Individuals must report people trying to sell antiquities or bulldoze and dig up sites because otherwise, there will be nothing left.”