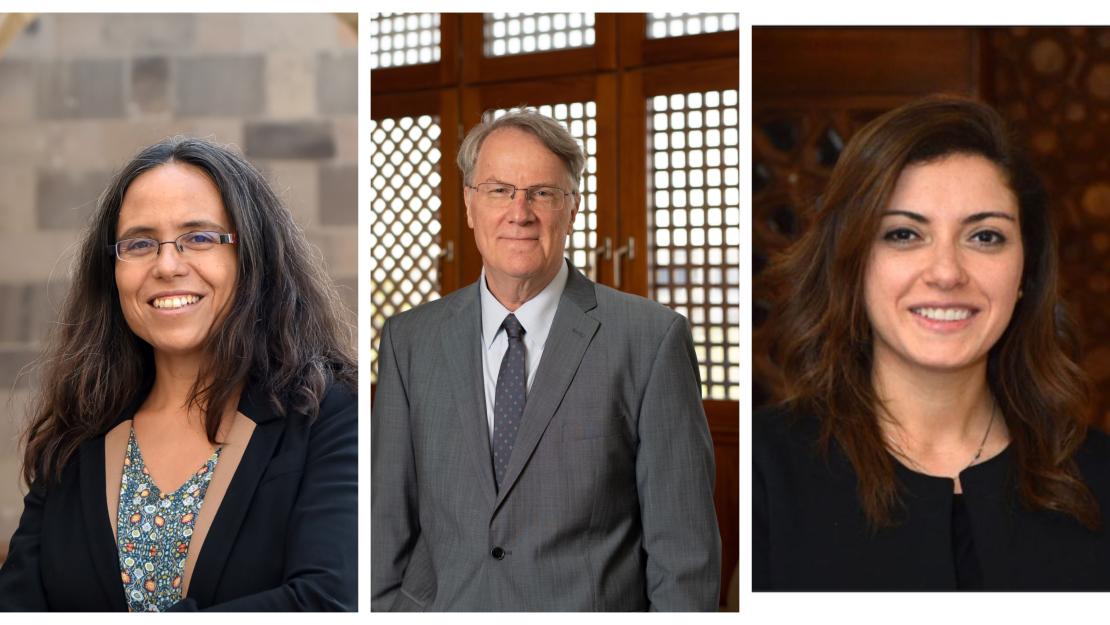 "The greatness of our University rests squarely on the talents and accomplishments of its faculty," said Provost Ehab Abdel-Rahman. "At AUC, we are blessed with faculty members who engage in groundbreaking research, scholarship and creative work. I am delighted to congratulate this year's tenured faculty who are all prime examples of AUC's commitment to excellence. AUC continues to be fully committed to tenure excellent faculty, [who] together with the many distinguished faculty members, contribute to realize the University's vision of excellence in teaching, research and creativity."

Heshmat’s journey at AUC began in September 2013 when she joined the Department of Arab and Islamic Civilizations as assistant professor of Arabic literature. For Heshmat, teaching garners its own special rewards, namely rich interactions with students and the ability to impact future generations. “One of the things I enjoy most is that by teaching at AUC and interacting with its students, I feel I can make a difference for the new generations,” she said, adding that she is “overjoyed” about receiving tenure.

Building upon the research she has done while working on her book titled Egypt 1919: The Revolution in Literature and Film, a project facilitated by a grant from AUC’s Office of the Associate Provost for Research, Innovation and Creativity, Heshmat is now undertaking an ambitious new research project, for which she was awarded a fellowship at the Nantes Institute for Advanced Study, which is part of the Some Institutes for Advanced Study consortium.

“The project is tentatively titled Gender, Narrative and Nationalist Movement: Auto/biographical Narratives of Women in Egypt 1919. This work aims at retrieving the autobiographical narratives of the nationalist and feminist militants who were active participants in the anti-colonial revolution of 1919 by looking at a wide range of texts they authored, including memoirs, articles, poems, short stories and unpublished letters. I plan to turn the research I am doing for this project into a new book,” Heshmat explained.

Meloy, who is a graduate of AUC’s Center for Arabic Study Abroad, expressed his gratitude for this recognition. “I’m honored to receive tenure. I appreciate the faculty and working with all my colleagues,” he said.

When he first joined AUC in July 2021 as HUSS dean, Meloy emphasized the importance of critical thinking: “The critical skills our students acquire from our various disciplines give them the means to continue learning after they graduate. It’s not so much teaching them what they need to know now, but rather teaching them how to figure out what they need to know and giving them the skills and traits to teach themselves: sharpening critical thinking, cultivating curiosity and creativity, fostering individual and social awareness, and strengthening effective communication.”

With his attention primarily on administrative work at this time, taking the lead in various capacities to strengthen the pillars of a strong liberal arts education, Meloy hopes to get back to pursuing research. “My recent research has been on economic crises in the Mamluk period, how they were understood and how the authorities dealt with them,” he said.

Allam joined the University full time in 2016 but has been part of AUC as adjunct faculty since 2005. “I was very happy to hear the news about tenure because it came after years of hard work, commitment and dedication,” reflected Allam, “I appreciate the high standards of education that AUC maintains throughout the years, the University environment as a whole that fosters education both personally and professionally, and certainly the liberal arts education that really distinguishes AUC from any other institution in Egypt.”

For Allam, receiving tenure is a reflection of her continuous efforts to tailor teaching methods that keep students invested in the material taught and encourages them to think critically through case studies from the industry and beyond the classroom, acting as an ambassador for the University while gaining ground in areas that will be significant for her career.

“Working with such well-reputed entities has helped me in creating a strong network with academics and professionals on the regional and international level, where the flag of AUC has always been raised, and it has definitely contributed to the development of my personality as a teacher and researcher,” Allam said.

Allam is currently focusing on expanding her research, especially in the field of media management, as the rapid pace of technological development shapes the media scene like never before. “It is vital to understand the new business and value creation models, as well as ways of adaptation to the consistently changing industry. I am also focusing on research that examines media policies and regulations, especially since we are now witnessing huge changes in the media legislative landscapes, whether in Egypt or the region,” she said.