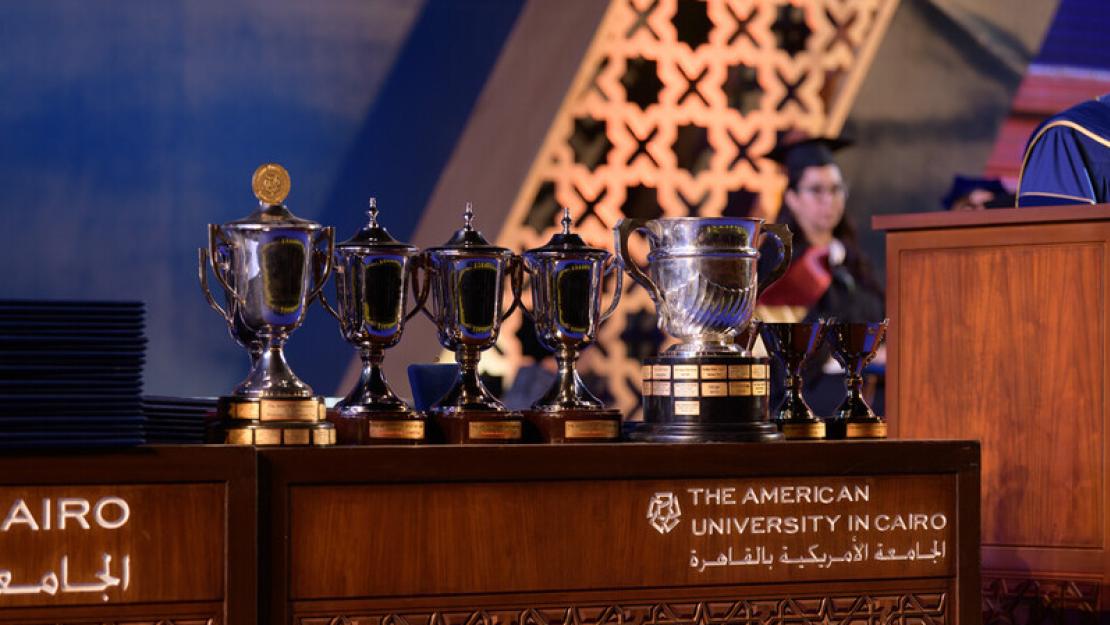 Sixteen graduates and three faculty members were awarded at AUC's Spring 2022 commencement ceremonies in late June. The awards recognized a number of academic and service-related achievements by recipients, from earning the highest grade point average across different disciplines to furthering women's empowerment and demonstrating excellence in teaching.

Presented to the student(s) with the highest grade point average. 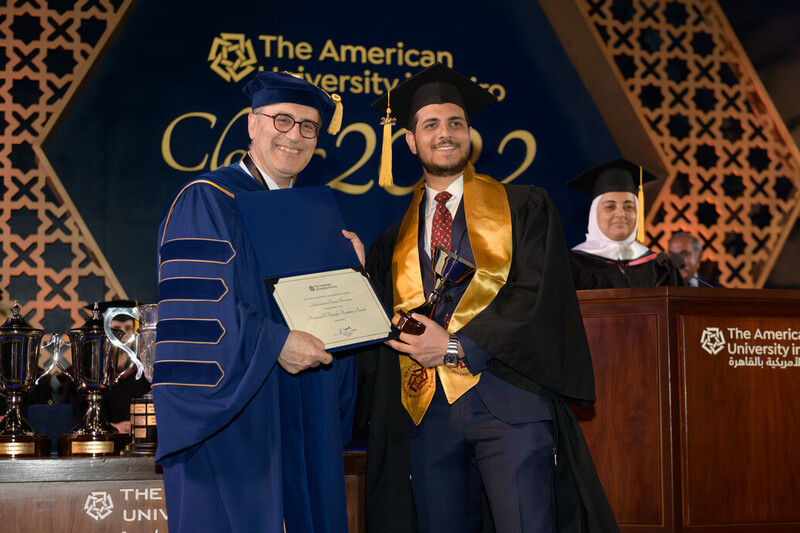 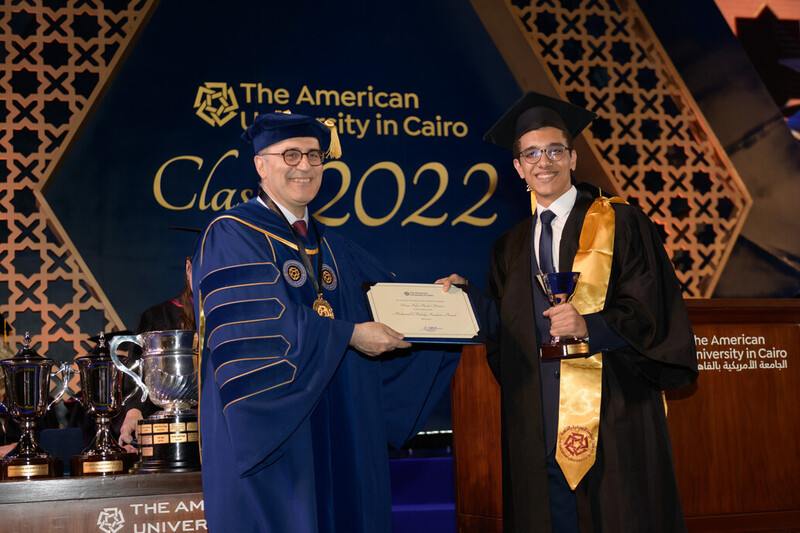 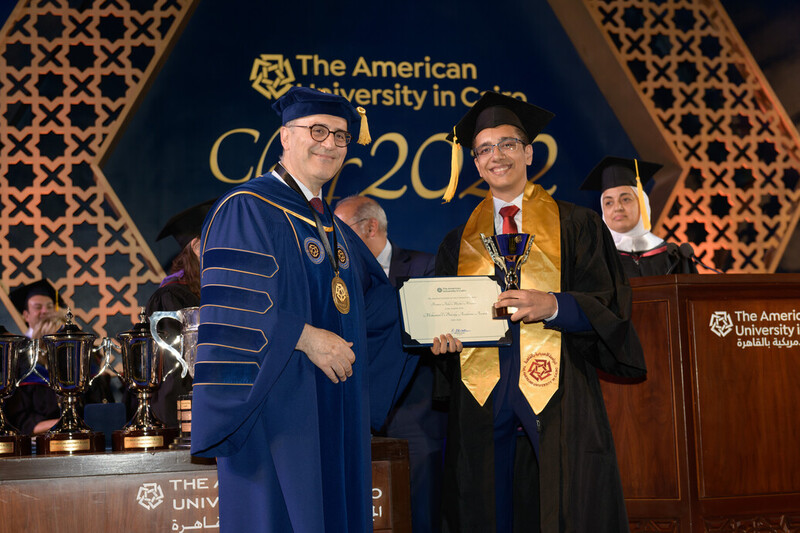 Dr. Ahmed Zewail Prize for Excellence in the Sciences and Humanities

Established by the late Dr. Ahmed Zewail to recognize an AUC honors graduate whose academic accomplishments demonstrate extraordinary commitment to the pursuit of scientific inquiry and the affirmation of humanistic values. Eligible students submit an essay for consideration, and the winner receives a certificate, medal and cash prize. 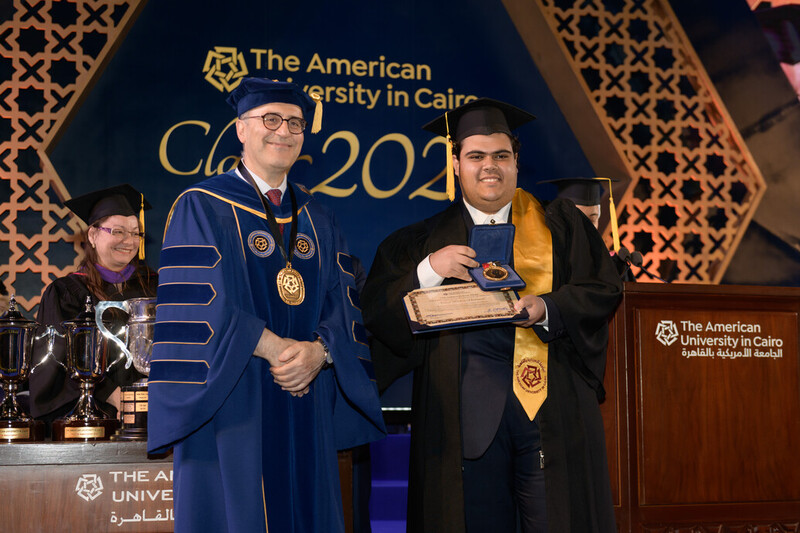 Established by Dr. Aziza Ellozy and Lady Thomas, in memory of the late Mrs. Doria Shafik, the award provides an annual cash prize to a student who worked on women's empowerment in any discipline, field or activity, such as artwork, a community service project, research on the inclusion of women, volunteer work and more. 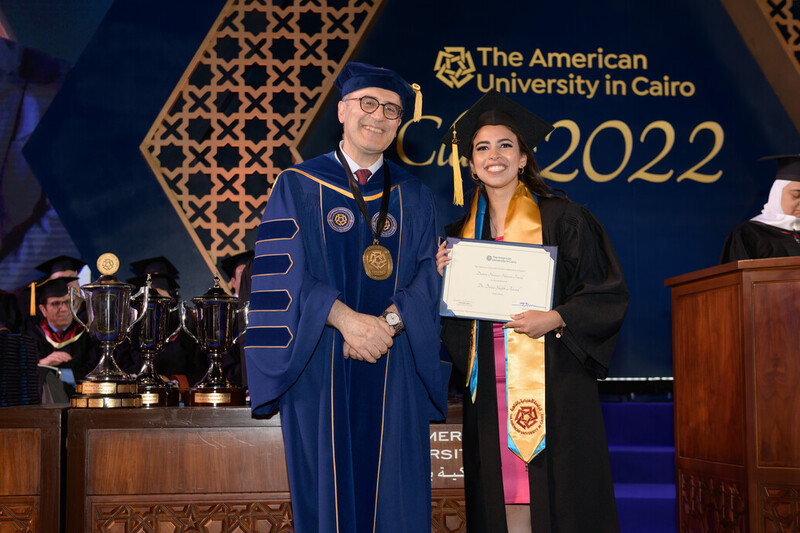 Presented to a graduating senior who has demonstrated strong academic achievement and contributed to extracurricular activities, including community service. Candidates for the award are nominated by their faculty advisers. 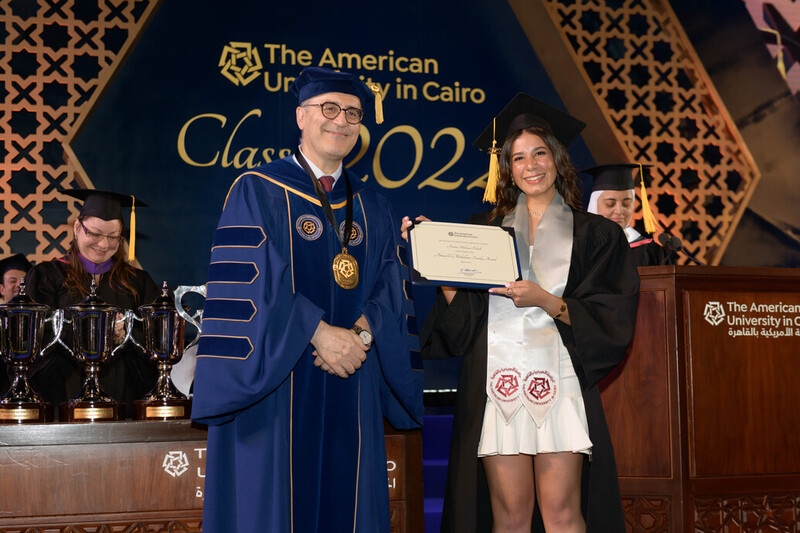 Presented to a student who has demonstrated exceptional capability in blending academic achievement with a major contribution to student activities. All nominees should have a minimum grade point average of 3.0 and are interviewed by several Parents Association board members to decide on a winner. 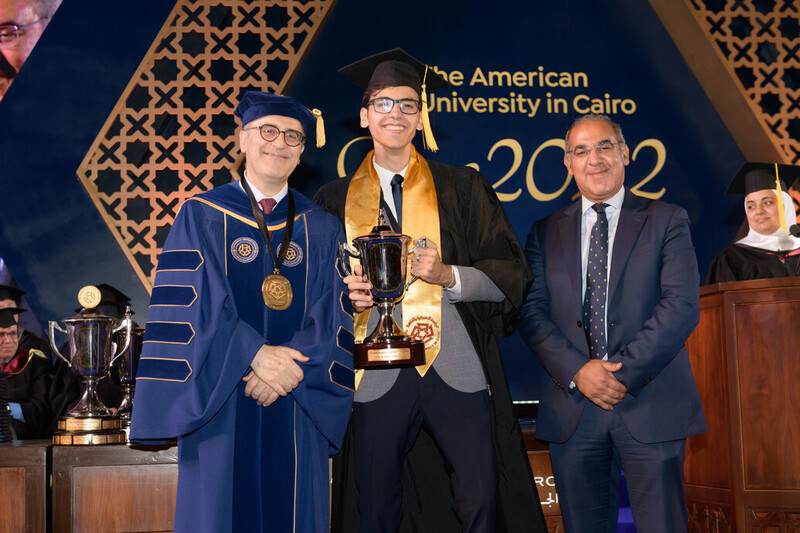 Awarded to a member of the graduating class who has been an active leader in any branch of the Student Government (Student Union, Student Court or Student Senate) and has made an impact on the AUC community through his or her position. 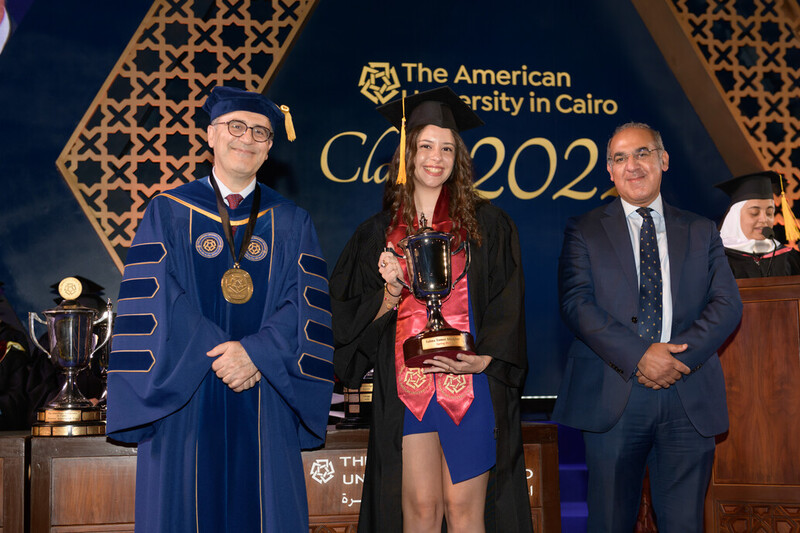 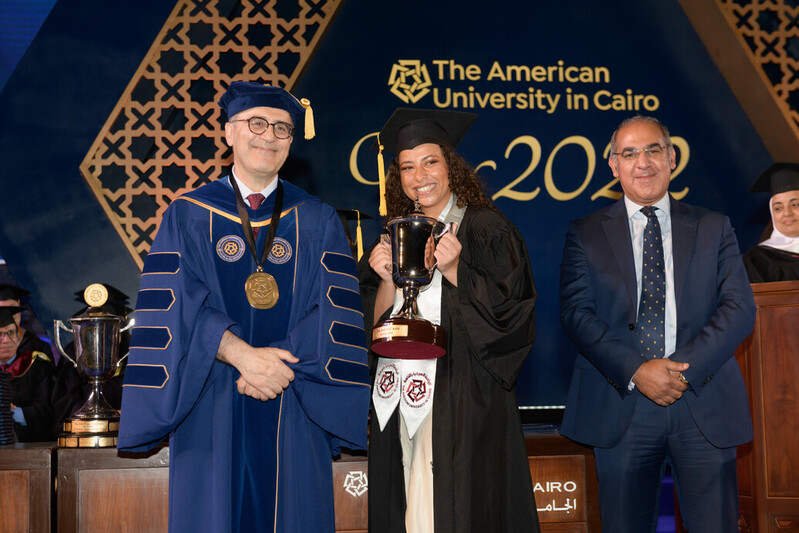 Presented by the Parents Association in memory of the late AUC student Omar Mohsen, who passed away in 2012 during the tragic events of the Port Said stadium. It is awarded to a recipient who wins a gold, silver or bronze medal representing AUC in national and international tournaments, in addition to maintaining a minimum grade point average of 3.0. 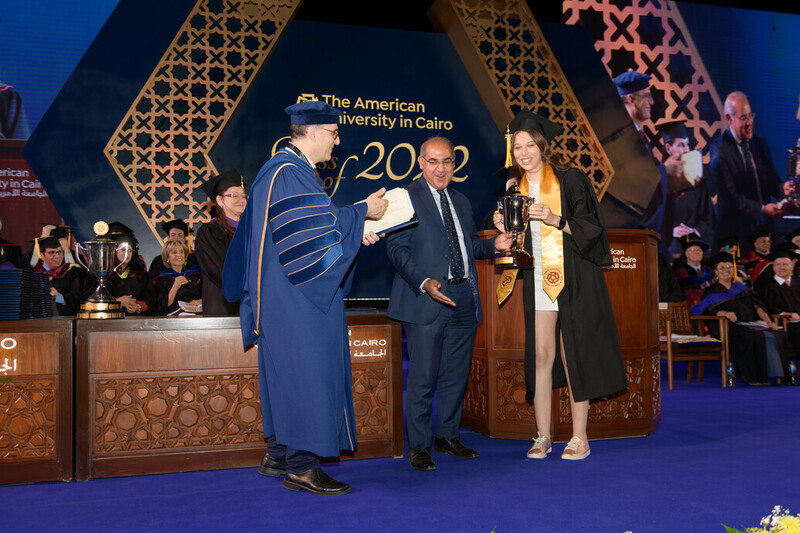 Established in 2017 to provide a biannual cash award to the highest performing STEM (science, technology, engineering and mathematics) student. The award recipient is selected by a committee headed by the dean of the School of Sciences and Engineering.

Lady Thomas established this award to recognize the highest undergraduate achiever in chemistry. 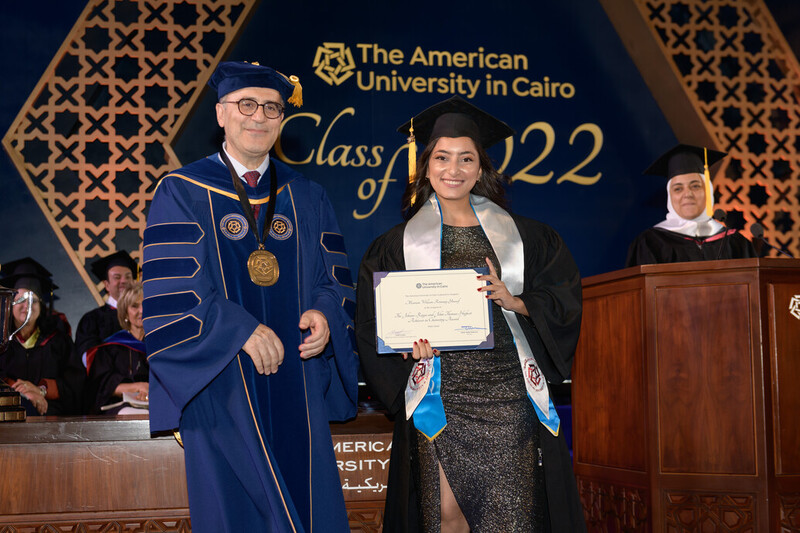 Given to the highest performing student in musical arts or music technology. 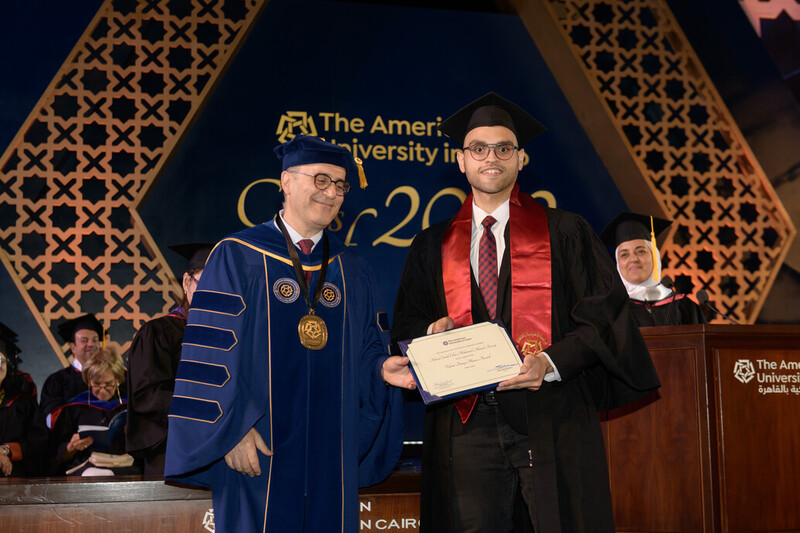 Established by Professor Soraya Altorki to honor the memory of the award-winning Palestinian-American female journalist Shireen Abu Aqleh who was shot in May 2022 while reporting on a raid in Jenin, West Bank. Abu Aqleh had led an inspiring career during her 25 years of press work across the Middle East, bravely reporting on the occupied Palestinian territories. The award is offered to a high-achieving Palestinian student from the West Bank or Gaza. 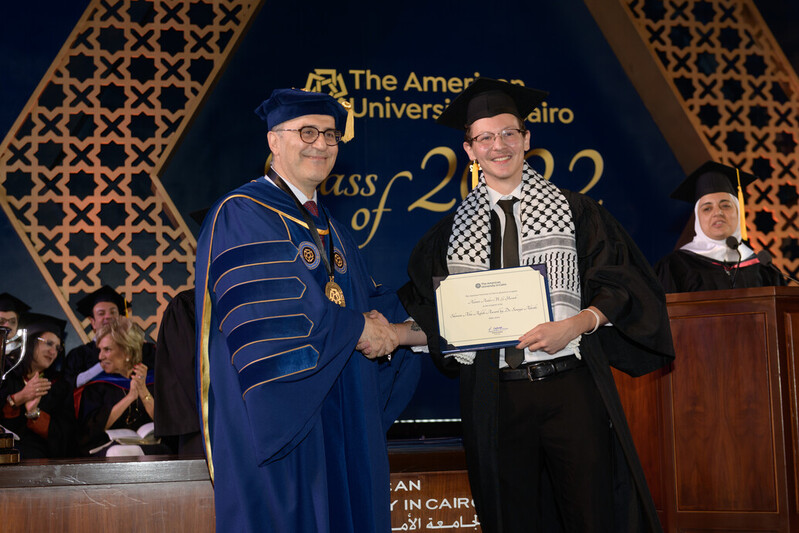 Established in his memory by El Sawy’s family to be awarded to a graduating public school scholar with the highest grade point average in the School of Sciences and Engineering. 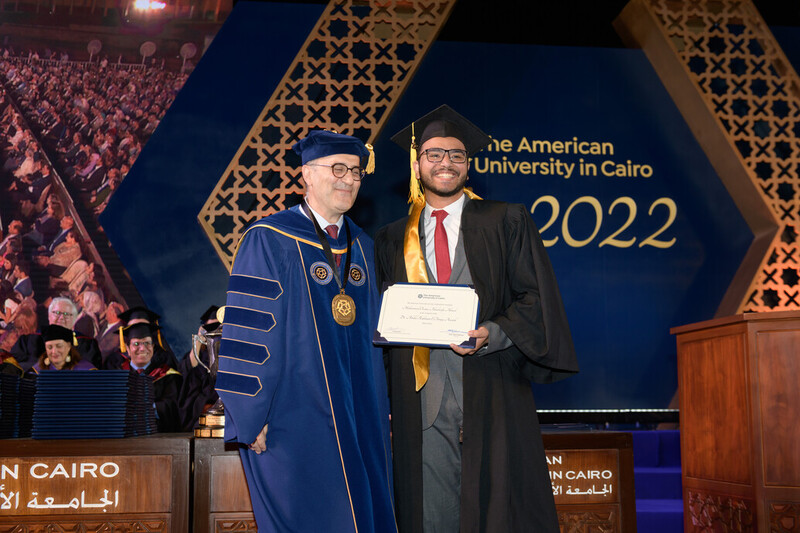 Esablished in May 2011 by the Graduate Advisory Council to commemorate the ashivements of Egyptian activists who contributed to the extension of civil and political rights in the Egypt the Arab world during the period following January 25, 2011. The award recognizes an AUC graduate student for his or her outstanding thesis work on a topic related to democracy, human rights, citizenship or sustainable development in the Middle East and North Africa. The award-winning student receives $1,000. Nominees must be ith their thesis  completed during the current academic year.

Thesis: “Seen and Safe: Digital Stories of Grief, Care and the Making of Subjectivities Online”

Established in 2017 to provide a biannual cash award to the highest performing STEM (science, technology, engineering and mathematics) student. The award recipient is selected  by a committee headed by the dean of the School of Sciences and Engineering. 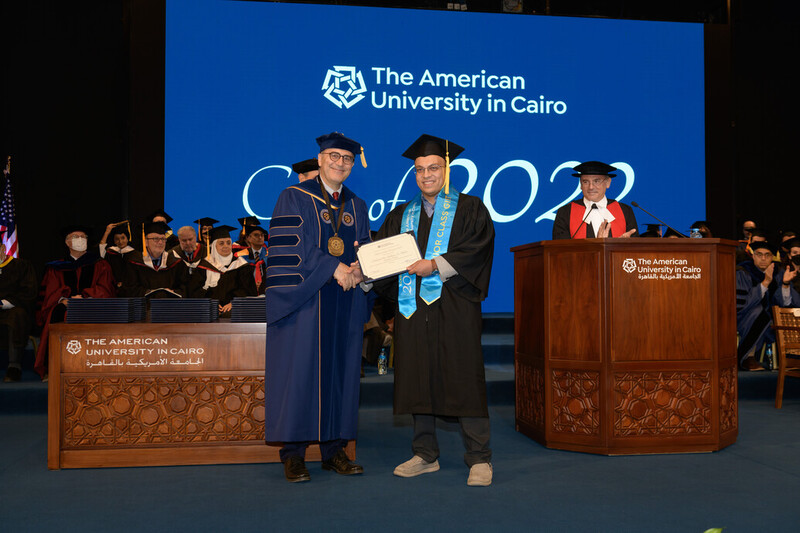 The Excellence in Academic Service Award honors faculty members who demonstrate a record of excellence in academic service to AUC.  The candidate must show evidence of sustained service to the University above and beyond normal service. Criteria for determining an award are based on the quantity and quality of service. 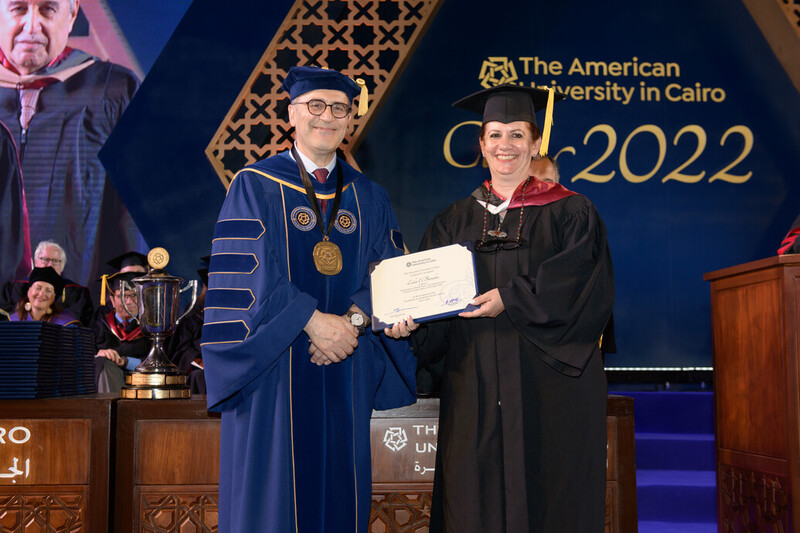 The Excellence in Research and Creative Endeavors Award recognizes the faculty member’s scholarly or creative achievements. Selection will be primarily based on work already published, presented, performed or exhibited while in the service of AUC and within the last five years. The candidates must demonstrate a distinguished record of past and continuing excellence in research and creative endeavors and their work must be recognized nationally and internationally.

Yasmine Motawy, senior instructor II in the Department of Rhetoric and Composition 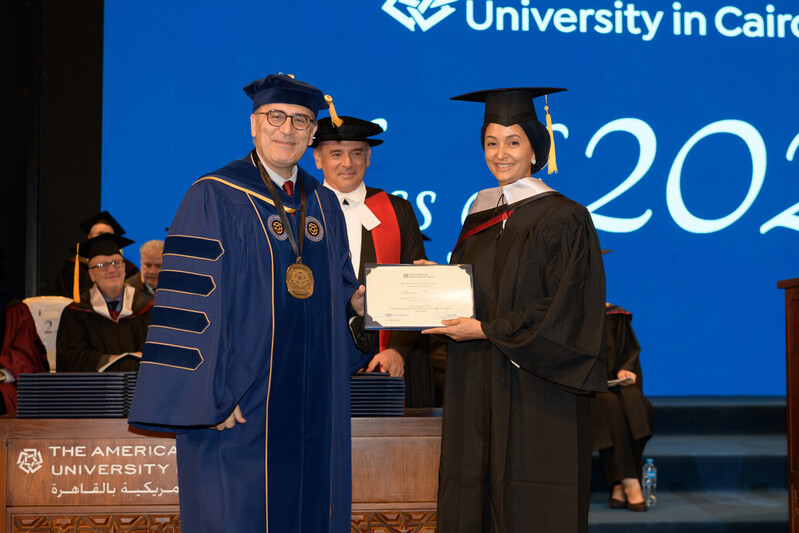 The AUC Excellence in Teaching Award recognizes the scholarship of teaching and learning as well as the faculty commitment to excellence, outstanding effort, and achievement in teaching. The candidates must demonstrate a distinguished record of past and continuing excellence in teaching.

Hakim Meshreki, assistant professor and CEMS-MIM academic director in the Department of Management 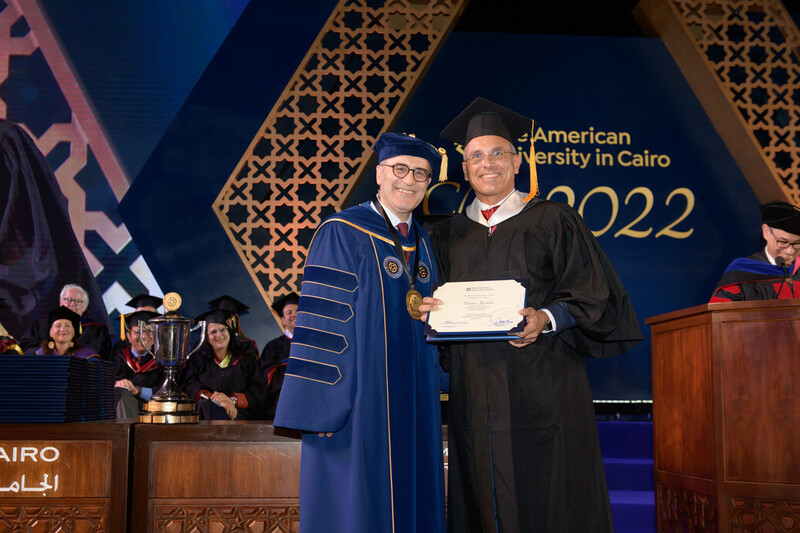