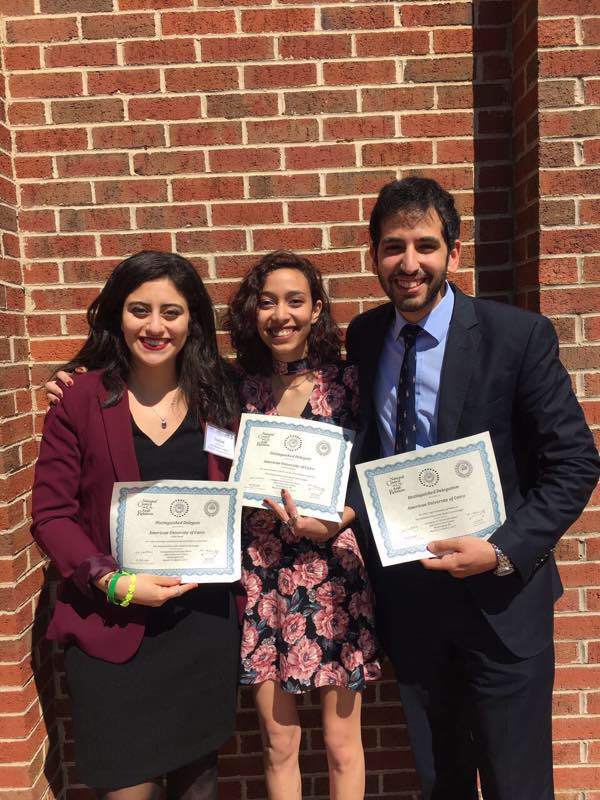 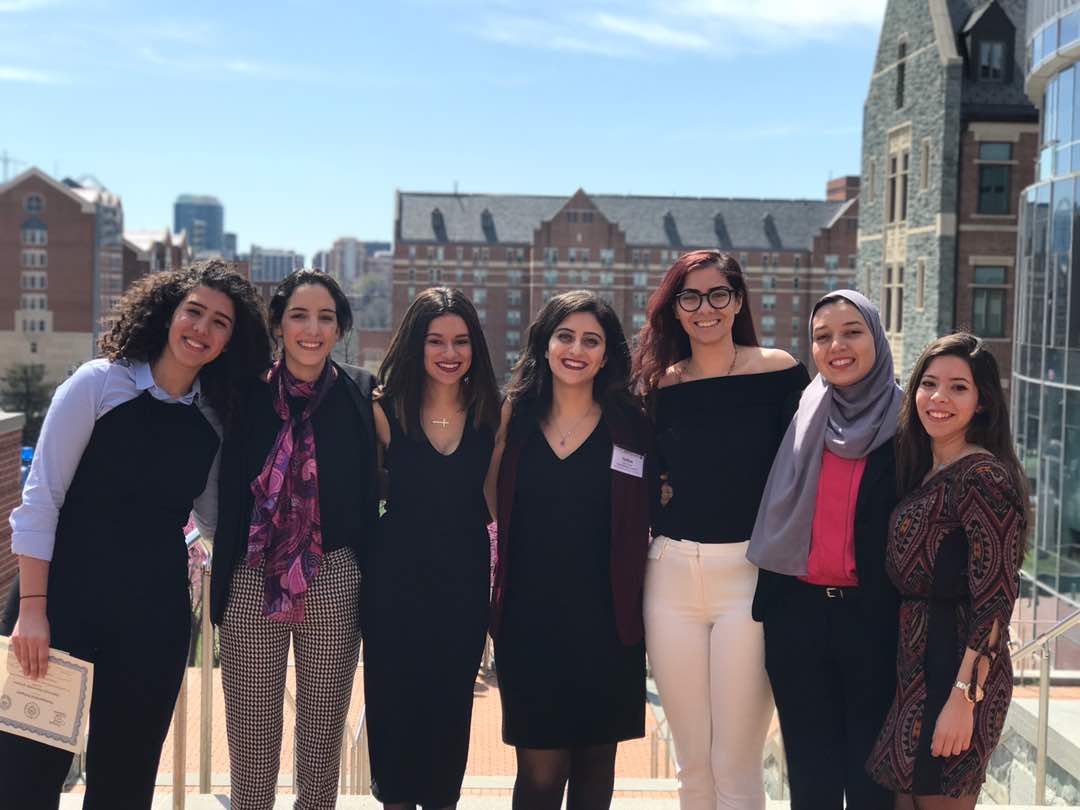 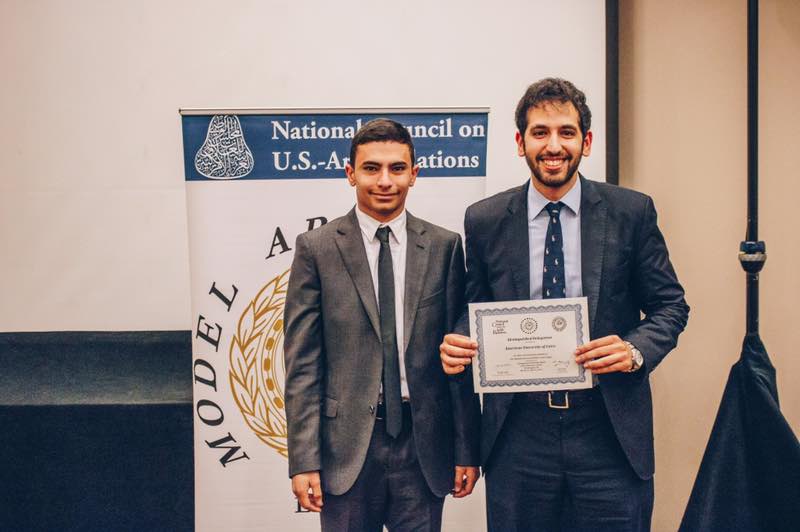 For the eighth year in a row, Cairo International Model United Nations team at The American University in Cairo (AUC) was recognized with the Outstanding Delegation award, the highest award at the National Model United Nations (NMUN) Conference in New York City. In addition, AUC’s Cairo International Model Arab League team participated in the 34th U.S. National Universities Model Arab League at Georgetown University and won four Distinguished Delegation awards for different councils."This is quite an achievement," said Walid Kazziha, political science professor and faculty adviser to both CIMUN and CIMAL at AUC. "Compared to previous years, the results achieved this year exceeded all expectations and raised the name of our institution higher than ever before." This year marks a particular feat for CIMUN, as the University sent two teams to represent two delegations at the New York conference. President Francis J. Ricciardone held a reception this month to recognize the teams’ success at the conference. Both teams were awarded first place, and individual awards were presented to AUC team members. The Best Delegation Award in the Security Council went to Ziyad Rushdy, accounting major. Two Position Paper Awards were awarded to Marwan Al Sayed, actuarial science major, and Reem El Hadidi, political science major, who participated in the United Nations High Commissioner for Refugees at the conference.  “It is very difficult to win first place, especially with two different teams competing against a large number of universities that prepare for the conference as part of their academic curriculum. Our students prepare outside class time and have been winning for several years now,” explained Omar Zaky, CIMUN secretary-general and a political science major. The conference is held in high regard because of the level of academic training many university students carry with them. Though AUC’s CIMUN is considered as an extracurricular activity, it is one of the three oldest entities on campus, boasting a great deal of experience. The two AUC teams this year represented the delegations of Monaco and Kenya. A total of 41 AUC students, including the CIMUN High Board traveling along as head delegates, competed as part of these two delegations. Students were prompted to research foreign policy and discuss various topics within different councils modeling those of the United Nations. For many students, this competition represented an opportunity to travel abroad and compete on an international level for the first time or, at least, visit New York for the first time. “To be put in a new competitive environment and come away with such an achievement is a magnificent thing. This competition demonstrates the ability of AUC students to thrive in a competitive environment and their capability of working well individually, with guidance to continue developing,” explained Zaky. CIMUN and its High Board, comprised of students Omar Zaky and Omar Rezk, Professor Walid Kazziha and graduate adviser Nour Shafik are responsible for selecting the students who will attend the NMUN conference and providing necessary training. “At CIMUN, we try to raise issues that are ongoing in Egypt and around the world and provide people with a safe environment to express themselves. Students learn how to research, debate, lobby, respect others’ opinions, negotiate and speak publicly,” noted Zaky. At Georgetown University’s 34th U.S. National Universities Model Arab League, AUC’s CIMAL team received the awards for the Distinguished Delegation for the Economic Affairs Council; the Social Affairs Council; the Heads of State Council and the Joint Defense Council. In each of the councils, two AUC students were honored, and the whole team was honored with the Distinguished Delegation Group Award granted to AUC. AUC’s team, made up of 14 students, competed against 400 students from 22 American universities. The awards were determined by a popular vote for individual councils and by a committee of judges for the group award. Students underwent a rigorous process to ensure that they have the knowledge and skills necessary for the conference. "We put together trainings that would prepare us for the event, including a mock conference," said Aly Amer, head delegate of CIMAL and a double major in political science and integrated marketing communication. "All AUC students showed great competence when dealing with the academic content of the conference." The conference was academically and socially beneficial to student participants. "It was definitely a plus for us as AUC students to gain insight from people coming from the region being discussed," Amer noted. "Interactions were not limited to the conference room. We actively built friendships, since we were all doing something we feel passionate about."