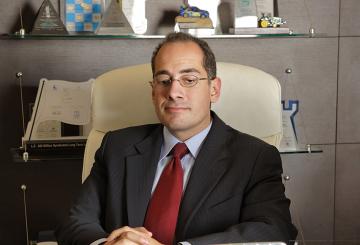 Mr. Hisham El-Khazindar is the co-founder and managing director of Qalaa Holdings, a leading investment company in Africa and the Middle East. Established in 2004, Qalaa Holdings (formerly known as Citadel Capital) is an African leader in energy and infrastructure. Before co-founding Qalaa Holdings, El-Khazindar was executive director of investment banking at EFG Hermes. He advised on landmark M&A and IPO transactions in the region and started his career in 1996. During 1999-2000, he was on secondment to Goldman Sachs in London. El-Khazindar serves on the boards of several leading regional companies, including El Sewedy Electric and Magrabi Retail. He also serves as a trustee of The American University in Cairo and as a fellow of the Aspen Institute’s Middle East Leadership Initiative. In 2013, El-Khazindar was selected as a Young Global Leader by the World Economic Forum, and in 2014, he was chosen among the top 100 Young African Leaders by the Paris-based Think Tank, Institut Choiseul. He holds a BA in economics from The American University in Cairo (1996) and an MBA from Harvard Business School (2003).